I don't have a child. Might someday, though, and one of the scenes I've watercolored in my head is his or her first day at the ballpark. We'll watch someone smack a ball way over a fence, and when the commotion subsides, a little voice beneath a cap several sizes too big will ask me, "Daddy, who hit the most home runs ever?"

It's a question dads dream of hearing from their children, one they once asked of their own fathers, one that connects generations like DNA. But I no longer fantasize about that afternoon. I only fear it.

While baseball debates who has taken steroids, this is what steroids have taken from us. Records that once drew joy and wonder now bring only skepticism and scorn. The DNA has been anabolically altered into something we don't want to share with our kids but shield them from.

Were statistics always a gleaming pool of purity? Of course not. Gaylord Perry slathered his way to 300 wins and the Hall of Fame. Whitey Ford admitted to cutting baseballs late in his career, and each of Pete Rose's 4,256 hits probably had several greenies jumping out of it. On National Public Radio last week, a caller described how none of today's steroid-infested goons could compete with his beloved 1961 Tigers of Kaline, Colavito and Cash; I couldn't help but remind him that Norm Cash, who hit a stupefying .361-41-132 that season, did so by corking his bat.

But now we must suspect that steroids may have pumped up so many records to heights that might not ever be reached legitimately, and now these symbols of skill will forever stand only for selfishness. This, as if you couldn't tell, is the emotional side of the issue.

As for the rational side, there's little to be done about all this  even with the rare player who admits steroid use. Ken Caminiti won his MVP award; there's no giving it to Mike Piazza now. And the Indians will never get into the 2000 playoffs, which they missed in part due to Jason Giambi's (presumably) juice-boosted heroics in Oakland. This is not the NCAA, which lamely "vacates" Final Four performances by teams (1971 Villanova, 1992 Michigan) following scandals, a gesture as hollow as the space left behind. What's done is done.

Measuring the impact of steroids on records is a nearly impossible exercise. First, several other factors such as smaller ballparks, harder bats, tiny strike zones and honest weight training have contributed to baseball's increased offense. (And no matter what Hall of Famer and U.S. Sen. Jim Bunning says about players like Hank Aaron and Willie Mays, who were his contemporaries, some really did have their best years late  in fact, Aaron was one of them, his career year coming at age 37.)

When I conducted a study for the New York Times last December to assess how Barry Bonds' recent aging process differed from historical norms, it suggested that he enjoyed 142 more home runs than the "typical" slugger would have. But unless we come to understand baseball's legitimate changes to health maintenance (all players are staying productive longer) or get any greater definition of what Bonds did or didn't do to his body, the knot of Barry Bonds will never untangle.

Then again, baseball's records have always had to be viewed in the context in which they were set. The tides have always ebbed and flowed  from the dead-ball era of the early 20th century to the high-offense 1920s and 1930s to pitching-happy 1968 to today. "All records are set under conditions which are favorable to the setting of such a record," said baseball historian Bill James. Sure enough, legendary numbers such as Hack Wilson's 191 RBI came in 1930, and Bob Gibson's 1.12 ERA came in 1968. And the modern record for batting average, Nap Lajoie's .426? That came in large part because in 1901, the American League didn't count foul balls as strikes. 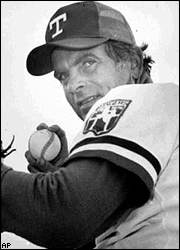 (As for players' breaking records along with the law, that isn't new either. Babe Ruth wasn't exactly sober for all of his 656 home runs between the 18th and 21st Amendments.)

Career records are often products of circumstances as well. Nolan Ryan obliterated Walter Johnson's strikeout mark in part because all of baseball became more whiff-prone. And it certainly didn't hurt Aaron's pursuit of Ruth to be playing in Atlanta-Fulton County Stadium during the hitting-poor late 1960s.

The difference, and it's a big one, is that at least we can identify what those conditions were, and they applied within the rules to all players on a team or league. We will probably never know who cheated with steroids and who did not. Bonds' slew of recent seasonal marks  home runs (73), on-base percentage (.609), slugging percentage (.863) and more  and possible trumping of Hank Aaron's career 755 will always, fairly or not, be viewed as residue of baseball's collective steroid acquiescence. Score one for the players association.

Somewhere, lurking between reactions emotional and rational, lies the resignedly pragmatic. Affixing asterisks is not it. First, for all the legends and Billy Crystal movies, asterisks have never been used in baseball's record books  Roger Maris' 61 home runs in 1961 were given separate listing below Babe Ruth's 60 to denote how the season had just been lengthened by eight games. (Strangely, when Sandy Koufax broke the National League record with 269 strikeouts, two more than Christy Mathewson, no one really worried about it.) This inherent silliness doomed the distinction from the start; by the time Ruth's separate listing was officially removed in the 1990s and Maris stood alone, no fans would have ever suggested that Ruth still owned the record. Even mental asterisks have half-lives.

There's no deciding yet how to decipher the mess steroids appear to have made of all the numbers now before us. Too little information is available, and too much might become so in the future. And hard as this might be, every player, regardless of accusation or innuendo, deserves the benefit of the doubt until actual facts are learned, because we would all want that for ourselves.

In the meantime, looking at baseball's records, gazing up at them like constellations in the night sky, might not be as joyful as it once was. And we don't yet know what we'll say to our kids when their little voices ask us about them. But we have a pretty good idea. It's the little voice in all of us.

Alan Schwarz is the senior writer of Baseball America and a regular contributor to ESPN.com. His book, "The Numbers Game: Baseball's Lifelong Fascination With Statistics," is published by St. Martin's Press and can be ordered on Alan's Web site.