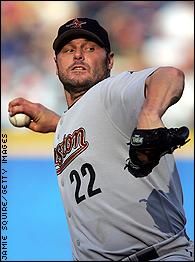 As I watch these festivities, I can't help but see a young man standing uncomfortably outside the camera's field of vision, wishing he could join the fun. His name is Harry Krause.

You probably have never heard of Harry Krause, but almost 100 years ago he dominated major-league hitters more quickly than any pitcher before or since. In 1909, as a 21-year-old rookie left-hander for the Philadelphia Athletics, Krause won each of his first 10 starts, six of them shutouts. But just as quickly, like so many pitchers of that era, Krause's arm began to ache -- he stopped pitching well, got sent to the minors and never threw in the majors again.

We never got to find out how good Harry Krause might have become. In fact, for most of baseball history, a "sore arm" was like a malevolent genie who visited pitchers in the night, entered their joints and corroded their futures from the inside with no explanation or recourse. Johnny Beazley, Karl Spooner, Mark Fidrych ... they all faded into anonymity before medicine could fix them, medicine we now take for granted. When you consider that almost every top modern pitcher has gone under the knife at some point -- heck, some throw harder after ligament-transplant surgery -- you realize what a lucky era we're in.

So lucky that most people forget that Roger Clemens could have been one of those pitchers we never heard from again. It was 20 years ago that he and his throbbing shoulder lay on the operating table -- before any 20-strikeout games, before any Cy Young awards and before arthroscopy was a sure thing. Before Dr. James Andrews was sure he could fix him.

Clemens was closer to the scrap heap than most -- particularly Clemens himself -- care to remember. In 1984, having established himself as one of the top pitching prospects in baseball, he complained about a sore shoulder soon after reaching the major leagues and was sent home to Texas early. The next year, he achingly creaked through several starts, his velocity down, while no one knew quite what was wrong (some Boston writers even questioned the kid's tolerance for pain).

In June 1985, Clemens learned that a shoulder tendon and nerve were rubbing together, causing "the nerve to rise and get as big as shoelaces," Clemens said then. He tried to pitch through it but ultimately couldn't. On Aug. 23, he was told that he had a "flap tear" in his shoulder and was reportedly "devastated" by the news. The only good news was that the arthroscope, which originally had fixed knees in the 1970s, had come far enough that it could be used, instead of the more invasive scalpel, to shave down the damaged tissue.

"We had very little knowledge [about pitchers] -- they hurt and that's about all we knew," recalls Dr. Andrews, who performed the hour-long surgery on Clemens. "We began to arthroscope shoulders and started being able to see what was inside. Roger was one of the early ones."

Recalls Clemens: "My wife and my mother were there, and they watched Dr. Andrews do the surgery -- he had it on a TV screen out in the lobby. He talked to them over a microphone even as he was performing the surgery. He showed them my cuff -- he kind of lifted it up and said, 'Cuff's fine, a little pink.' But that's a scary time for a kid. My career really hadn't started much yet, and there I was in the operating room."

The good news was that Clemens' rotator cuff was fine. The bad news was no one knew how he would respond.

During spring training in 1986, talk still had Clemens opening the season on the disabled list. He defiantly replied, "I would pitch with an arm missing if I had to." Clemens then mounted a 9.00 spring ERA, allowing 29 hits in 19 innings while striking out just eight batters and pitching tentatively. Concern for his long-term health was very real. "I plan to go as hard as I can for as long as I can," he said then.

Clemens then opened the season by pitching well in his first three starts, all wins. Then came his April 29 assignment against Seattle, a game perhaps you have heard of.

Clemens burned through the lineup with shocking ease, whiffing 14 batters through six. When he struck out Phil Bradley to open the seventh, Clemens walked off the mound toward the dugout. Boston manager John McNamara's heart sunk.

He picked the dirt out, then continued picking Mariners out of his teeth. Clemens whiffed 20 that night to announce to the baseball world that he was, in fact, healthy again. A 24-4 record and his first Cy Young award later, Clemens' Hall of Fame march had begun and was rarely interrupted by health issues again. Now, his Cy Young count is up to seven.

In fact, Clemens has been such a machine for the past 20 years that many people can't (or don't want to) believe how close we were to losing him. I asked Andrews to consider what might have happened had Clemens been born just 10 years earlier and hurt his shoulder before the scalpel gave way to the arthroscope.

And landed right next to Harry Krause, posing for a far different picture than those we're snapping today.

Alan Schwarz is the senior writer at Baseball America and a regular contributor to ESPN.com. His book, "The Numbers Game: Baseball's Lifelong Fascination With Statistics," is published by St. Martin's Press and can be ordered on Alan's Web site.