It's amazing how much in life can be summed up by just the right Casey Stengel quote. So it's time to cite one of our favorites.

Back when the late, great Casey was managing the worst team on earth, those '62 Mets, he was brilliant enough to point out that we actually need losers in this world.

Why? Because "without losers," Casey philosophized, "where would the winners be?"

If it weren't for those '62 Mets and their legendary 40-120 record, think how many people out there would be calling the 2003 Tigers the worst team in modern history. And they wouldn't much want to hear about those 1935 Braves or 1932 Red Sox or '69 Padres.

But the great thing about this world we live in now is, we don't have to argue about this. We have computers. And they've got all the answers, right?

So we convinced the inventors of the best computer-simulation baseball game around, the geniuses at Diamond Mind Baseball, to simulate a seven-game "World Series" between Ol' Casey's '62 Mets and these 2003 Tigers.

We gave the Tigers home-field advantage -- based on the results of this year's All-Star Game, of course. We brought the Polo Grounds back to life (on a minimal budget, too), so the Mets could go home again. And because baseball in 1962 was a slightly different animal than baseball in 2003, Diamond Mind averaged out playing conditions over the last 48 years to make this fair.

Then, to make this really fun, we brought in the great Rod Kanehl, the funniest '62 Met we know, to provide official color commentary. For the record, Kanehl says he doesn't want the Tigers to lose 121.

"Hell, it would be a travesty," Kanehl said. "Our team, we didn't have any farm system. We didn't have 100 years of background. And we didn't have any pitching. The only people we had were people other teams didn't want. ... So I want us to keep the record. At least we have an excuse. If they catch us, everybody in their front office ought to be fired.

"Who's that guy who won three games for them in the '68 World Series? Mickey Lolich. They should bring him back. Bring back Denny McLain. Get him out of jail. He can beat somebody. I don't want to see them do this. They should bring in some ringers."

Well, if the Tigers want to bring in some ringers for September, that's cool. But they weren't allowed to bring anybody but themselves to our computer World Series. And not surprisingly, that made for a sensational and dramatic series that went right down to the final hitter in Game 7.

So don't touch that mouse. Here come the fabulous details: 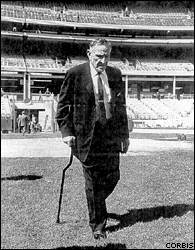 Not your prettiest game. But that's probably not surprising, considering many of these Mets are dead at the present time. The teams combine for eight errors -- five by the Mets, three by Tigers third baseman Eric Munson. The Mets take an early 3-1 lead against Tigers starter Mike Maroth, then serve up six unanswered runs. An error by second baseman Charlie Neal in the fifth leads to the go-ahead run. The Tigers wind up scoring six unearned runs. And even though the Mets come back in the eighth, thanks to a passed ball and Munson's third error, Danny Patterson nails it down with a 1-2-3 ninth.

Kanehl on those six unanswered runs the Mets gave up: "Sounds familiar."

Kanehl on whether the Mets might have been rusty after 41 years off: "Rusty? We shoulda been at our best. We were well-rested, wouldn't you say?"

What Stengel once said about catcher Chris Cannizzaro, who went hitless: "He's a great hitter -- until I play him."

The Mets trail in the seventh, 2-1, then tie it against reliever Steve Sparks on a leadoff walk by Richie Ashburn, an Elio Chacon single and Frank Thomas' RBI ground ball. After that, this gets crazy. On the way to leaving 17 on, the Mets have the winning run thrown out at the plate in the eighth, leave the bases loaded in the ninth and waste a leadoff double by Cannizzaro in the 10th. But in the 11th, Munson makes his fifth error of the series, leading to a Mets run. Then it's time for Stengel's big decision of the day: Starting pitcher Al Jackson (8-20, 4.40 ERA) has pitched all 10 innings and has thrown 123 pitches. But Casey sends him out for the bottom of the 11th. Uh-oh. Dmitri Young singles. Carlos Pena hits the second pitch out. Tigers up, two games to zip.

Kanehl on those 17 runners left on by the Mets: "Sounds like us."

Kanehl on Stengel leaving Jackson in to try for an 11-inning complete game: "It doesn't surprise me, because we had no relief. Of course, that was before they had 'saves' [officially]. But we didn't have any, anyway."

What Stengel once said to Marv Throneberry, who went 0-for-3: "We was gonna get you a birthday cake, but we figured you'd drop it."

A mere 39 years after being obliterated for a housing project and playground, the Polo Grounds spring back to life for the cleanest game of the series. Not one error. And the Mets ride ace Roger Craig (10-24, 4.52) to their easiest win in decades. It's a 1-1 game after five innings. Then Jim Hickman whomps a three-run homer off Nate Cornejo. The Mets take a four-run lead into the ninth. But Craig Anderson (3-17, 5.36 ERA) comes out of Kanehl's favorite bullpen to load the bases -- before getting Bobby Higginson to ground out for the final out. Hickman raises his average for the series to .462 with three hits and a walk.

Kanehl's reaction as Anderson comes in to pitch the ninth: "Oh, bleep."

What Stengel once said about the Polo Grounds: "Just when my fellas learn to hit in this ballpark, they're gonna tear it down."

The big story is Mets starter Bob L. Miller, whose win in this game gives him as many wins in the (ahem) "postseason" as he had all season (one). Miller had started the year 0-12 but beat the Cubs in the next-to-last game of the year. Tigers starter Matt Roney gets pounded for six runs in 4 2/3. The Mets coast into the ninth up 7-1 before Dmitri Young's three-run homer off reliever Bob Moorhead makes it look like a game. Mets third baseman Felix Mantilla commits his fourth error of the series. Choo Choo Coleman thrills the crowd by committing a passed ball. Marvelous Marv Throneberry thrills the crowd with one of his rarified triples.

Kanehl on Throneberry's triple: "Oh, I know he could hit a triple in the Polo Grounds. Remember the famous story about how he hits a triple and gets called out for missing second. Then Stengel goes out to argue and the umpire tells him, 'Don't bother. He missed first, too.' And Casey says, 'Well, I know he didn't miss third. He's standing on it.' "

Kanehl on Bob L. Miller's only regular-season win: "The thing I remember about it is, all the writers who covered us took off and went to the track, and left one writer to cover for everybody. So here Bob Miller lost all those games, and there'd be 10 writers there after all the losses. Then he finally wins a game, and there's one writer there. But hell, it was Chicago. Nobody wanted to go to the games if they could go to the track."

The home team wins for the fifth straight game. But in "pivotal" Game 5, the Tigers are a mess. Dmitri Young drops a fly ball in left in the third, leading to the go-ahead run. Munson commits another error, his sixth of the series. The Tigers undo a decent effort by Maroth with four errors. The Mets take a 5-1 lead in the seventh and, as always, hang on. The big star is starting pitcher Jay Hook (8-19, 4.84 ERA). He not only pitches 8 2/3 innings. He gets three hits, helping the Mets to lead the series for the first time, three games to two.

Kanehl on Hook getting three hits. "I don't remember him getting one hit."

What Stengel once said to Hook after he won a game and singled in a run: "I might pitch you every day. But you didn't hit as good as I expected."

All Game 6's are required to be classics. And this one qualifies. Tigers starter Jeremy Bonderman, who was minus-21 years old when the '62 Mets were in their heyday, outpitches Al Jackson. And the Tigers take a 3-2 lead into the ninth. ...

At this point, we interrupt our saga for this question from Rod Kanehl, who failed to sneak into any of the first five games: "When," Kanehl wonders, "do I do something?" When we inform him Game 6 would indeed be the game, he retorts: "Let me guess. I pinch-run, right? (Right.) And I tie the game, right? (Right.) Happened all the time. He put me in to pinch-run, I'd steal second and score." ...

OK, back to the action. The Tigers are one strike away from winning. But Kanehl, the potential tying run, is on third. And Richie Ashburn, having a fabulous series (.448 on-base percentage), then beats out a ground ball to short. Kanehl scores. Tie game. The Mets then score two more runs and take a two-run lead. But in comes Craig Anderson again. And you know what happens: He walks the leadoff hitter (Kevin Witt). So Stengel gongs him for left-hander Ken Mackenzie. A double by Pena puts the tying run in scoring position. But a sac fly and ground ball bring the Mets to within an out of winning the series. Oops. They're the Mets. So Cannizzaro commits a passed ball on the next pitch to tie the game. Then Mackenzie drills Ramon Santiago, who charges the mound and starts a brawl. Both are kicked out, so in comes seldom-used left-hander Willard Hunter (1-6, 5.57). Two hitters later, Shane Halter singles, and the Tigers win.

Kanehl on Cannizzaro's passed ball: "Oh, bleep. That brings back memories. I thought he knew better than to throw one low to Cannizzaro. Cripes, what was he thinking?"

Kanehl on the heartbreak of having the game and series get away when the Mets were one strike away from winning it: "Heck, we were one out away all the time in '62. I mean, you're talking about a team that lost 120 games. So one out away and losing -- that happened every day."

What Stengel once said about Cannizzaro: "That Canzoneri ... he's the only defensive catcher in baseball who can't catch."

Game 7 at Comerica Park
How 'bout this drama? The Mets go back to their ace, Roger Craig, a man who would actually spend a week of spring training with the '03 Tigers as a guest voice of wisdom. The Tigers score first. But Cornejo gives up a two-run double to Throneberry in the third and a solo homer to Gene Woodling in the fourth. And Craig hands a 3-1 lead to Mackenzie in the eighth. But it's Mackenzie's sixth appearance in seven games, and (naturally) he tires in the ninth. Craig Monroe homers with one out, and it's 3-2. Pena then crushes one 410 feet to dead center, but Ashburn makes it back to the track and hauls it in. So down to their final out, up steps Munson, who has more errors in the series (six) than hits (five). But it's his chance to make up for all of that, and he mashes one to center -- deep, deep, deep. Ashburn reaches the wall, leans back against the 420 sign ... and catches it. Mets win! Mets win! Mets win!

Kanehl on the thrill of victory: "We won the booby prize. We won the Futility Cup. I don't think they'd let us drink the good champagne, the Veuve Clicquot, after that. We could drink that purple stuff. We'd have to drink Cold Duck."

What Stengel once said after winning a World Series: "I couldn't have done it without my players."