It's time to clear this up before the stampede picks up too much steam:

Alex Rodriguez is not the MVP in the American League this year.

But he's not the MVP. Not this year.

We've read a bunch of columns lately -- many of them from people whose opinions we respect, including our colleagues, Rob Neyer and Jim Baker -- that say, essentially: This Is The Year.

Well, sorry. This Isn't The Year. And here's why.

1) WHAT PART OF "VALUABLE" DON'T YOU UNDERSTAND?

This is about "value." We've voted on this award. We know how we defined "value." And it's obvious we weren't alone. MVP voters have traditionally prioritized "value" in terms of what it meant to teams that won, or at least contended.

The lessons of history couldn't be more clear. There have been 145 MVP trophies -- and 141 of them went to players on teams with winning records. That's 97 percent, friends.

But the recent trends are even more significant. Since 1994, when baseball broke into six divisions and created twice as many pennant races, no player from a losing team has finished within 100 points of the winner. That includes A-Rod last year. And it undermines his candidacy this year.

The last time the Rangers had a winning record this year was after Opening Day. The last time they were closer than 15 games out of first place was the 57th game of the season. So by the longstanding definition of "value" as it applies to this award, how "valuable" could A-Rod have been?

2) WHERE WAS HE WHEN THEY NEEDED HIM?

OK, suppose we accept the argument that it is possible to have value on a non-contending team. Obviously, Andre Dawson, Ernie Banks and Cal Ripken all won MVP awards. So it must be possible, at least in some years.

Well, unfortunately for A-Rod, we can't say that about him -- not this year.

Remember, when this season began, there was lots of talk about how this was the year the Rangers could finally get back to .500. For almost two months, that still looked like a possibility. But it isn't hard to look back and find the time this became another lost season.

They went 2-20 in their next 22 games -- a stretch of Tigers-like baseball that blew up the season. If we could say, "At least that wasn't A-Rod's fault," we could look at his MVP candidacy in a whole different light. But that isn't the case.

He went 2-for-23 with runners in scoring position during that time. He hit three homers and drove in seven runs (one fewer than Jason Bay drove in Friday in one game). In the first 16 games of that span, he had one homer and two RBI.

So as the ship sank, he sank with it. It really wasn't until his team's season was essentially over that he began compiling many of these alleged MVP numbers.

Does that sound like an MVP season to you? It doesn't to us.

The only time in American League history that a player from a losing team won the MVP award, there were no pennant races. That was 1991. The Blue Jays won the East by seven games. The Twins won the West by eight games. Which opened the door for Ripken.

But the only comparisons between that season and this season are: A) there's no clear-cut MVP and B) we're still forced to give an award to somebody.

In 1991, though, we had only two contending teams to choose from. This year, we had seven teams within three games of a playoff spot with three weeks to go in the season. That's half the league.

So don't try to tell us somebody from those seven contenders hasn't been the difference between winning and losing on his team.

Everybody has a different definition of an MVP. But one question we always tried to ask ourselves in the years we voted was this: If you take this player away from his team, where would it finish?

In the case of A-Rod, the answer is: Last. So that doesn't exactly help his cause.

That also is a question that clearly has hurt the Yankees' assorted candidates since 1996 -- and will again. No one Yankee seems so indispensable that voters can conceive of his team missing the playoffs without him. And the Red Sox are hurt by the same problem.

The collapse of the White Sox and Mariners has wrecked the candidacies of Carlos Lee, Magglio Ordonez, Frank Thomas, Ichiro Suzuki and Bret Boone. If Ichiro or Boone carry the Mariners back into the playoffs -- or even to the brink -- in the next week, get back to us.

But there are two teams that have roared down the stretch like Bobby Labonte -- and had to if they wanted to avoid going fishing. Those teams are the Twins, who were 7½ games out at the All-Star break, and the A's, who were 7 out on July 1.

And those second-half charges have produced three very viable MVP candidates whose names haven't been mentioned by the people who just crunch numbers. 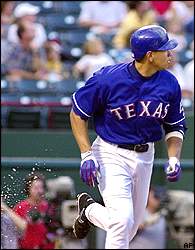 Since the day he got to Minnesota, he leads all AL leadoff men in batting average (.324) and on-base percentage (.390). And unlike A-Rod's big numbers since the break, those stats have had a direct impact on the race and his team's season.

The only down side for Stewart is that no player has ever won an MVP award after changing teams in midseason. But in a year when there are no orthodox candidates, there's no reason not to consider his unorthodox credentials -- because he has made that big a difference in the race.

Meanwhile in Oakland, the Athletics' two best players -- Miguel Tejada and Eric Chavez -- finally snapped out of first-half funks to resume their place as the best left side of any team's infield.

And they've both produced a higher percentage of their team's runs than anyone else in the league in that span, except A-Rod. But again, the runs they've produced are the reason their team is now in first place. The runs A-Rod has produced have had zero impact on anything except his own numbers.

So there's a week left in the season. Let's see someone step up and win this MVP trophy. Maybe Shannon Stewart. Maybe Eric Chavez. Maybe Miguel Tejada. Maybe someone else.

But there are not enough compelling reasons to give this award to a guy whose team hasn't played a meaningful game in months, no matter how great a player he is or how great a career he has had.

In some ways, we feel sorry for A-Rod. But in other ways, he was the one who made the decision to take the money in Texas. He could be in Seattle or Atlanta if he so chose. But he took the dollars. So as tremendous a player as he is, we can't start redefining what the MVP award is just so it fits his talents.

He hasn't had the kind of historic year he had last year. He's actually having his worst season as a Ranger. And if he'd played the last two months the way he'd played in the first four -- back when his team's season still hung in the balance -- nobody would be nominating him as MVP.

So before we read one more column that suggests this is his year, we want you to know all the facts -- and then come back to the only sensible conclusion:

This isn't the year. Sorry, A-Rod. Maybe next year.

Jason Stark is a senior writer for ESPN.com.