PHILADELPHIA -- You don't mourn the passing of places like Veterans Stadium, for the same reason you never hear anybody mourn black-and-white TVs, or mood rings, or the Macarena.

The Vet had its time. And it had its place. But that time isn't now. And that place is long gone. And whatever the Vet may have been in that time and that place, all we came to know now about it in its final years is what it wasn't.

Its crime, in the end, was that it wasn't Camden Yards. And it wasn't Jacobs Field. And it wasn't Pac Bell. The ceiling leaked. The grass was plastic. And that aroma you smelled on the way in wasn't always hot dogs and popcorn.

So it's hard to imagine there is anybody left who will miss this round mound of concrete now that it's gone, especially once they lay eyes on the real ballpark that continues to rise out of the parking lot just beyond its gates.

But that didn't stop 58,554 Philadelphians from showing up Sunday at the historic corner of Broad Street and Pattison Avenue to say goodbye to a place where many of their most everlasting sports memories were manufactured.

Not necessarily their happiest memories, of course. This was, after all, Philadelphia, where the only thing harder to find than a championship flag is a kid familiar with the concept of a victory parade.

Nevertheless, more than 68 million people sat in the seats of the late, not-so-great Vet over the last 33 years and watched the Phillies play baseball. And the sadness they felt Sunday didn't appear to have anything to do with the fact that this was, undoubtedly, the last game they would ever get to see on NexTurf.

Stuff happened at the Vet, you see. Great stuff. Historic stuff. Stuff even dynamite can't wipe off the face of the planet.

So it was only poetic that, on Sunday, after one final ugly 5-2 loss to the Braves, the Phillies trotted out the men who did all that stuff, one after another after another, until tears flowed and throats were hoarse and memories came back to life.

More than 60 former Phillies -- from Willie Montanez to Mickey Morandini -- got to touch home plate and walk to the mound one last time. Then three generations of Phillies regulars got to hear their names announced by the great Harry Kalas and got to jog to their positions for the final time.

Then Steve Carlton toed the rubber, in his pinstriped No. 32, and threw one last invisible pitch. Let the record show he was as unhittable as ever.

And Mike Schmidt dug in at home plate, did one more little wiggle, unleashed that bat and did one final home run trot.

And then, for the grand finale, the man who threw the final pitch of the only World Series the Phillies ever won, Tug McGraw, was driven in from the bullpen in a long black limo.

When the doors opened, McGraw headed for his personal home office, that big pile of dirt in the middle of the infield. And once he was back on his mound, Tug McGraw said, "it all came right back."

Hey, how could it not? It was on this mound, 23 years ago, that McGraw whiffed poor Willie Wilson, of those 1980 Royals, and kicked off a party Philadelphia has forgotten how to throw. Sunday, nearly a quarter-century later, poor Willie Wilson struck out yet again -- and he wasn't even there.

"At least," McGraw laughed later, "that's the last time Willie Wilson is going to strike out on that field."

The Yankees have had 26 triumphant World Series moments like that one. Even the Minnesota Twins have had two of them. But in Philadelphia, there is only one. And maybe that's why the eruption that followed Veterans Stadium's final pitch ever seemed to rattle windows and shake billboards.

"I thought today was louder than anything I've ever heard before," said McGraw, still battling his way back from surgery to remove a brain tumor six months ago. "I know 1980 was pretty loud. But today was a different kind of loud. A goodbye loud is different than a winning loud. I guess that's the difference."

In Boston and Chicago, in Atlanta and L.A., the goodbye they said to the Vet on Sunday was more like good riddance. We know that. In all those other places, nobody remembers the good stuff that happened at the Vet. They just remember all the bad stuff. The embarrassing stuff. The stuff that made Philadelphia famous. The stuff that turned the Vet into America's least-beloved stadium.

It was at the Vet where the Phillies' biggest free agent of the late 1980s, Lance Parrish, got booed for making an out in the first at-bat of his Phillies career. It was at the Vet, on the final Sunday, where The Man Who Was Supposed To Be The Ace, Kevin Millwood, got booed off the mound for having the nerve to throw an 11-hitter on a day when everything was supposed to be perfect.

Wouldn't you love to calculate how many boos were uttered in this place in the last 33 years? It's possible we can't even count that high. But this writer and one of his all-time favorite 1980s Phillies, Don Carman, actually tried to figure it out on Sunday.

We proposed a formula where we multiplied total attendance times losses. That came to nearly 82.8 billion boos, if you're interested. But Carman decided it was still low.

"I think you have to multiply it again times the games Schmidt played here," he suggested. "You could always count on Schmitty getting booed for not getting a hit or not hitting a home run."

So we tried that. And it came to more than 99 trillion boos. Which sounds about right -- give or take a few trillion.

But as a surprisingly philosophical Millwood said afterward, "These people pay their money to come see a ball game. They work hard to earn that money. So if they want to boo, they can boo. It's up to them." 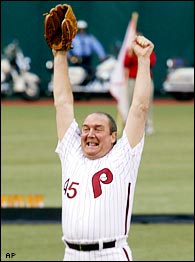 And that's exactly how it works. Philadelphia is the birthplace of freedom. So if they thought Freedom to Boo was in the Bill of Rights somewhere, it's too late to convince them otherwise now.

But there were some happy times for these people at the Vet over the years. And just to make sure they remembered that, many of those times were replayed on Diamond Vision throughout the Vet's final afternoon.

The Phillies did win two National League Championship Series at the Vet -- one in 1983, one in 1993. And the men who threw the last pitch of those two series -- Al Holland and Mitch Williams -- were both in attendance Sunday.

Once upon another time, Pete Rose broke Stan Musial's all-time National League hits record at the Vet, too, back in August of 1981. Rose, of course, wasn't there Sunday. But a "We Want Pete" chant did rise up out of the seats, with or without him.

The Phillies once won a game at the Vet that ended at 4:41 a.m. (the back end of a July doubleheader against San Diego in 1993). And the amazing part of that one was not the six hours of rain delays that made it possible. It was that attendance actually increased between 2 a.m. and 4:40.

"There were more people in the stands at 3 a.m.," the Padres' Andy Benes marveled at the time, "than we have in San Diego at our regular games."

There was a June game in 1989 that the Phillies won after trailing the Pirates, 10-0. Pirates broadcaster Jim Rooker will never forget that classic -- because it was during that famous game when he said, "If we lose this game, I'll walk back to Pittsburgh." A few months later, he really did -- for the sake of charity, if not for honesty.

And once, it was out there in center field at the Vet where so many Lenny Dykstra tobacco stains had preserved themselves in the Turf's archives that Pirates centerfielder Andy Van Slyke said: "It's like a toxic waste dump out there."

Stuff happened at the Vet that still makes you laugh. Or at least hold your head. Kiteman crashed into the center-field stands at the Vet. Benny the Human Bomb blew himself up at the Vet. The legendary Jeff Stone got picked off at the Vet. The Phillies wound up on the wrong end of an unforgettable 15-14 World Series game at the Vet.

Those who care to remember any of that can go on remembering it whether the Vet is still around or not. But they won't be able to peer way up into the right-field upper deck at the star that marks a 1971 Willie Stargell missile launch down an exit ramp that is still regarded as the Vet's longest homer.

And they won't be able to stare into the dugout, as ex-pitcher Larry Christenson often did, and think of how sore his butt used to get sitting on that rock-hard wooden bench.

And they won't be able to find that "spot right over second base" that Don Carman remembers because it was "where I hit that rocket off Storm Davis for my first hit" -- after he'd started his offensive career by going 0-for-54. Of course, "rocket" might not be quite the correct word.

Come February, when the dynamite goes off, there will be nothing but their memories to keep those visions alive. But that's OK, too. Moving on, after all, is part of life.

"It isn't like we had a grass field here like Fenway Park or Wrigley Field or Yankee Stadium and they were never going to tear it down because of the memories," said Schmidt. "And I know somebody must agree with me on that, because they're going to blow it up.

"We can all leave with our memories," Schmidt rhapsodized. "But I also think we can all agree that now, we need to take our memories and get the hell out of here -- before it falls down."