These are the questions that make baseball fans' hearts pump: Barry Bonds or Albert Pujols? Eric Gagne or Mark Prior? A-Rod or a guy from some team that actually played for something meaningful?

We can't remember a year when questions like these have made us burn more brain cells. But we've made our decisions. So, the envelopes please ...

NL MVP -- Barry Bonds
Who knows? Maybe some day, people will think we all must have gone nuts to choose the great Mr. Bonds over a guy (Pujols) who led the league in batting, runs, hits, extra-base hits and total bases. But then we ask ourselves: How do we explain how this Giants team won 100 games? And every explanation starts with Bonds, a man who influences nearly every inning of every game, whether he's allowed to swing the bat or not. If we regard the two most important numbers on the stat sheet to be on-base percentage and slugging, Bonds led Pujols in each by 90 points. Pujols did drive in 34 more runs. But he also was allowed to swing the bat 54 more times with runners in scoring position. So Pujols was great. Jim Thome was tremendous. But no player alive has a bigger impact on his team than Bonds.

AL MVP -- Shannon Stewart
We've thought. We've surveyed. We've debated. We've looked at all these guys' numbers except their zip codes. But in the end, "most valuable" to us means: Which player in the league made the biggest difference? Which player's team would not have gotten as far as it did without him? And the answer we kept coming back to was: Shannon Stewart. No player has ever won an MVP award after changing teams in midseason. But from the day Stewart showed up in Minnesota, the Twins went 46-23 (best record in baseball), went from five games under .500 to a team that blew apart its division, went from a lineup that scored 4.6 runs a game to one that scored 5.4 a game. And it was no coincidence that in that time, Stewart led all AL leadoff men in batting average (.322) and on-base percentage (.384). You can read our thoughts on A-Rod elsewhere on this site. But this was a year in which half the teams in the league had a shot to get to the playoffs in September. So we went with a guy who was the single most important reason his team won over David Ortiz and Jorge Posada, two players who had fabulous years but were surrounded by many players whose seasons were almost as good.

NL Least Valuable Player (LVP) -- Pat Burrell
It was supposed to be his breakout year, not his breakdown year. But Burrell's mysterious self-destruction wrecked the left-right balance in one of the most disappointing lineups in baseball. He showed how much ability is still in there, by hitting 21 home runs just about by accident. But his .209 batting average was more than merely the lowest of any regular player in baseball who would have qualified for the batting title. It was the second-lowest by any NL player who got 500 at-bats in the last 25 years -- trailing only Dave Kingman's .204 average in 1982. 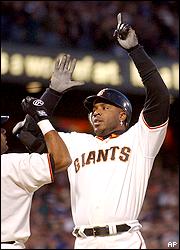 AL LVP -- Jeff Cirillo
It's never a good sign when you're supplanted in your own lineup by Rey Sanchez. But that's how lousy Cirillo was, for the second straight year. It isn't often you see a lifetime .304 hitter bat .205. But Cirillo did that. He had fewer extra-base hits (13) than Yorvit Torrealba. He had fewer RBI (23) than Chone Figgins. He hit .179 at home. And his unmovable contract kept the Mariners from adding someone more productive. Not good.

NL Cy Young -- Eric Gagne
Normally, we look at the Cy Young as a starting pitcher's award. But not this year. Not when there's a relief pitcher out there who doesn't blow a save. Who gives up more runs in the All-Star Game (three) than he gives up in almost three months after it (one). Who becomes the first relief pitcher in history with 100 more strikeouts (137) than hits allowed (37). This, friends, was the most dominating bullpen season ever, bar none.

AL Cy Young -- Roy Halladay
This is supposed to be an award based on performance alone. But the memory of Esteban Loaiza losing his team's two most important games of the year in September is one no voter can dismiss -- not while Halladay had a year in which he had eight more complete games than Loaiza (9 to 1), pitched 40 more innings and won 15 games in a row for a team for which he essentially was the rotation.

NL Cy Yuk -- Glendon Rusch
Still hard to believe the Brewers actually traded Jeromy Burnitz for this guy. Rusch almost evaded this award by getting evicted from the rotation in August. But it was too late. He wound up going 18 straight starts without a win, finished the year 1-12 and lowered his career winning percentage to a scary .356 (42-76) -- the second-lowest of any pitcher with this many decisions in the last half-century (trailing only Jesse Jefferson's .325).

AL Cy Yuk -- Colby Lewis
It tells you something about how overrated "wins" and "losses" can be that Mike Maroth became baseball's first 21-game loser in 29 years -- and still got beat out for this award by a pitcher who finished with a winning record (10-9). Lewis finished the season with the seventh-highest ERA (7.30) since 1900 by any pitcher with this many innings. But that just allowed him to become the first starting pitcher to have a winning record with an ERA over 7.00 since the unforgettable Tom Colcolaugh went 8-5, 7.08 for the 1894 Pittsburgh Pirates. So throw out those wins and losses. Colby Lewis' biggest win of the year is the Cy Yuk award.

NL Rookie of the Year -- Brandon Webb
Maybe if the Diamondbacks hadn't wasted 11 starts in which Webb gave up two earned runs or fewer (and still didn't win), this would have been an easier choice. Instead, it was almost impossible to pick a winner from among Webb, the effervescent Dontrelle Willis, Scott Podsednik, Marlon Byrd and the onrushing Miguel Cabrera. But we refer you back to our previous treatise on how overrated "wins" and "losses" can sometimes be. And this was a textbook case. Webb's opponent batting average was 33 points lower than Willis'. His ERA was almost half a run better. He threw four more quality starts. And just as Willis resuscitated his team's season, there's no telling what the Diamondbacks' record would have been if Webb hadn't galloped to the rescue when Randy Johnson and Curt Schilling went down.

AL Rookie of the Year -- Hideki Matsui
This one was just as impossible, and not because of all the questions about whether Japanese players should even qualify. But in the end, we couldn't overlook the fact that Matsui led all AL rookies in RBI (106), total bases (271), doubles (42) and walks (63). No player in the last 50 years has failed to win this award in a year in which he was the only rookie to drive in 100 runs. So in the end, despite a phenomenal field, that was enough, for us, to put Matsui over the top.