Let's get one thing straight: Curt Schilling didn't start all this.

His current employers, those payroll-lopping Arizona Diamondbacks, shot off the starter's gun by indicating to several teams they would be willing to trade the right-handed co-CEO of their local Aces Inc. 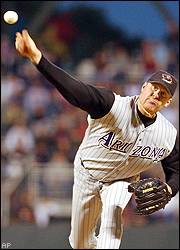 Then George Steinbrenner, as he's wont to do, booted this story into full-scale, back-page, talk-show, five-alarm media frenzy by ordering his baseball people to explore what it would take to make Schilling a Yankee.

But Schilling didn't start this. He's just the rider in the first car on the roller coaster.

"When you go to the bottom of the barrel and get to the basic facts, this is pretty simple," Schilling told Rumblings and Grumblings. "I'm not going to be in Arizona beyond this year, and I know that. So when I'm asked by my owner, 'Would you go to the Yankees?' what are my choices, really?

"I can stay here and pitch the last year of my contract in Arizona, and then walk. Or I can talk about possibly getting a three-year extension to go to New York and have a chance to win a world championship. If those are my choices, why wouldn't I at least agree to listen?"

And so he has. Which has since been reported by every major media outlet except Good Housekeeping.

But does that mean Schilling will be a Yankee by the time you're finished reading this column? There's a better chance of Steinbrenner selling the team to the Baseball Writers Association of America than there is of this trade happening imminently.

There are indications that when the Diamondbacks and Yankees contingents huddled at the GM meetings, Arizona asked for Nick Johnson and Alfonso Soriano and a prospect. And the Yankees were expected to assume not just Schilling's $12-million salary for next year, but also more than $16 million in deferrals. And take back either Matt Mantei or Junior Spivey.

So the Diamondbacks are going to have to adjust to the reality that, in this era, when you attempt to move a large contract (or contracts), you can't expect much talent back. If they don't, this deal isn't happening -- not now, anyway.

Arizona also has to come to grips with the high hard one that it has almost no other options. It's not as if Schilling is willing to listen to just any team that feels an urge to knock on Jerry Colangelo's door in an attempt to make some headlines. Schilling has a complete no-trade clause and total control over the next year of his life.

"There are two teams the Diamondbacks know I'll talk with if they try to make a trade with them," Schilling said. "That's the Yankees and Phillies. Other than that, there are no hidden factors, no hidden agendas."

He told the Philadelphia Inquirer's Jim Salisbury this week that if he has to go somewhere, the Phillies would be his first choice, "because that's home, and it's comfortable. That team has a chance to win the World Series. There's a new park. I love the fans there. The chance to pitch in that environment would be cool."