NEW ORLEANS -- For all those years as general manager in Montreal, it was all Jim Beattie could do to find the money to make a dramatic acquisition of a new resin bag. Now, though, things are different. 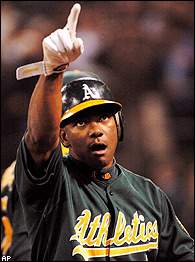 Now he's practically turned into Jed Clampett, trying to figure out how that oil well wound up in his back yard.

Now, of course, Jim Beattie works for Orioles owner Peter (Money Is No Object) Angelos. And so, in what sometimes seems like a "Beverly Hillbillies" remake with crabcakes filling in for the palm trees, it almost figures that Beattie could well be on the verge of spending, oh, about 12 trillion dollars in 48 hours.

OK, so maybe not 12 trillion. But after depositing 72 million bucks into Miguel Tejada's checking account Sunday, the Orioles' executive vice president sprinted right back to work.

And it isn't out of the question that sometime, before he leaves these winter meetings, his team could figure out a way to pay out more than 100 million additional U.S. dollars to enrich the coffers of both Ivan Rodriguez and Vladimir Guerrero.

As Sunday night arrived, the Orioles appeared close to reeling in Rodriguez next, with a deal believed to be in the neighborhood of three years, $30 million (although a big chunk of the money would be deferred). Meanwhile, they're still charging hard after Guerrero, who conveniently employs the same agent as Tejada (Fernando Cuza).

Boy, it sure wasn't like this in the good old days in Montreal, all right. Back then, Beattie's biggest expenditure might have been, well, what? The annual Expos Christmas party?

Asked if it felt a little strange to be doling out all this cash at the winter meetings, Beattie looked around the press-conference room and quipped: "Yeah. When I walked in, I said, `I've never been in this room.'"

When someone then asked what he might feel like if he goes ahead and spends even more gazillions of dollars, Beattie chuckled: "I'm just trying to figure out how to pay for dinner tonight."

Well, at least the dinner won't tell him it has better offers from the diners in the next booth.

Guerrero, on the other hand, hasn't had the look of a main dish that just can't wait to jump on the Orioles' plate.

Since the day he filed for free agency, the Orioles have been Guerrero's most obvious destination. And Beattie, his one-time GM, has been more open about pursuing him than any other GM on the continent. Still, Guerrero has given the appearance of a man who keeps looking around the disco for someone else to dance with.

A longtime friend of Guerrero said Sunday that he believes Guerrero's first choice is to play in Florida. In South Florida, obviously, he would be surrounded by balmy weather, a large Spanish-speaking community, more prominent Dominican players and a front office populated in great part with people he was familiar with in Montreal -- including senior VP Fred Ferreira, the scout who signed him.

But for Guerrero, this isn't just about dreams. It's about business. And for the Florida Marlins, the business end is always trouble.

The Marlins obviously have money issues, largely because they aren't sure if their favorite taxpayers will feel like building them a new ballpark. So they would want any contract offer to be long (maybe as long as 10 years), backloaded and possibly contingent on getting the new stadium approved. Guerrero already has turned down one backloaded offer, from the Expos. So why would he accept another one from the Marlins?

With Florida clearly unable to match the Orioles' financial firepower, with the New York Yankees out of the picture and with no other suitor visibly on the horizon, that opens a clear road for Guerrero to land in Baltimore.

On the other hand, it also opens a clear road for the Orioles to outspend Donald Trump. But as mind-warping as it might seem for one team to sign the three premier position players on the market -- Tejada, Guerrero and Rodriguez -- it appears Angelos plans to allow them to do just that.

"I don't think we have any sort of limitation on that sort of expenditure," said Mike Flanagan, the Orioles' vice president of baseball operations. "We have a lot of important pieces in our puzzle that we need to address. And now we have the flexibility to address them."

They also now have clear proof to offer to the other guys on their shopping list that a prominent player thinks Baltimore is a more attractive place to play than, say, Taipei.

"The Baltimore Orioles should be one of the premier franchises in baseball," Beattie said. "This is a place where players can come to the ballpark and find some of the greatest players in history hanging around the ballpark. ... Jim Palmer ... Brooks Robinson ... Boog Powell. These guys are around this team all the time. So the tradition and the whole cache of this organization is tremendous."

But the Orioles have more than tradition to sell, you understand. They also have ... uh ... ribs. Heck, if Boog's Barbecue isn't an attraction for a prominent free agent, it's only because the guy has some kind of blockage in his nasal passages.

"Miguel certainly knew, and was sensitive to, the Aroma Borealis of Boog's," Flanagan laughed. "It's a definitely an indicator of wind direction. If you can smell Boog's while you're at home plate, you know the wind is blowing in."

And now, if Pudge also signs on, Guerrero will be able to smell the sweet scent of two fellow Latinos deciding that Baltimore is their kind of place. Which should make it considerably easier for the Orioles to go 3-for-3 at the free-agent plate.

But you can't sign three big-time free agents until you sign the first one. And Miguel Tejada -- even at $12 million a year -- was a huge step for a franchise that is 97 games under .500 since its last winning season in 1997.

"It's a signal," Beattie said. "It's one of a few things we hope we can do to show other players that the Orioles are ready to contend -- and quickly."

So now, if they can just sign all these guys they're chasing, they might not even need the Red Sox and Yankees to secede from the American League to do it.

Jayson Stark is a senior writer for ESPN.com. Click here to send Jayson a question for possible use on ESPNEWS.