It took off like Apollo XII. It disappeared faster than Dane Sardinha. It eventually came to rest on a piece of driftwood in a different state than the batter's box it departed.

This, friends, was no ordinary homer. 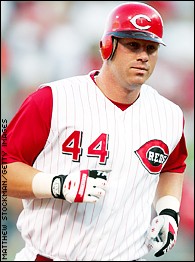 Technically, of course, this particular Adam Dunn homer didn't really disappear over the horizon. But it did, in fact, literally disappear.

One second, it was resting in the right hand of Dodgers pitcher Jose Lima. The next, Dunn was unfurling that monster swing of his. And there went the baseball.

Over the fence in center field, 404 feet from home plate. Over the 20-foot patch of grass behind that fence. Over the 32-foot-high hitter's eye at the back edge of that grass. Then over yet another wall that separates Great American Ball Park from the rest of the world.

It's impressive enough when a guy hits a baseball and it goes over a wall. Adam Dunn hit a baseball that cleared three walls -- and came down in the street.

"Can you imagine you're driving along out there, switching radio channels or something, and then a baseball comes through the window -- during a game?" Casey laughed. "What the heck would you think?"

Yeah, those Reds are just going to have to establish some kind of Adam Dunn protective zone in the future: Block traffic. Hand out hard hats. Maybe build a protective tunnel. Because it just isn't safe to walk the streets of Cincinnati when this guy's around.

This fellow is one strong human being.

"You know the Paul Bunyan legend?" Casey chuckled. "He's building the Adam Dunn legend. He's so strong, maybe he can help push boulders around and build a dam or something. If a flood is coming, they can use him to stop up the river. He could probably grab those 5,000-pound boulders and pick them up with one arm."

And meanwhile, in his spare time, Adam Dunn could just play baseball.

Fortunately, Dunn's mighty homer off Lima didn't break any windows or cause any concussions. According to an HOK architect who helped design the park, it landed on a street named Mehring Way, a ridiculous 535 feet from home plate.

Then it hopped along for another 200 feet or so and came to rest on a piece of driftwood on the banks of the Ohio River. Which, according to local geographers, meant it was hit in Ohio and came to rest in KENTUCKY. So maybe it just wanted to visit Smarty Jones on the stud farm. That's as good an explanation as any.

"He couldn't," Dunn concurred. "Ever see him play golf?"

McCoy reports that the baseball eventually was retrieved off that driftwood by an electrician named Tom Tuerck. Which is a shame, in retrospect. Think how cool it would have been to just leave that baseball alone and let it float off down the river.

Who knows where it might eventually have ended up? That Ohio River, after all, flows all the way into western Pennsylvania.

"It probably would have wound up in Pittsburgh," said Casey. "And Jason Kendall would have found it on his way to work."

Multi-Tasker of the Month
It tells you something about how Phillies pitcher Randy Wolf has been going that he was recently asked how he would compare himself to a guy named Babe Ruth.