"They're going to have their chances to get me back in that uniform. If they don't get me, it's probably because they didn't try hard enough."
-- Pedro Martinez, after his final game with the Red Sox

ANAHEIM, Calif. -- Oh, they tried. The Red Sox tried harder to "get" Pedro Martinez than many people in their organization wanted to try. They tried harder than Pedro will ever acknowledge they tried.

But hard as they tried, Martinez will never throw another pitch in that Red Sox uniform. We know that now.

We know because on Monday, he said yes to the New York Mets, to an offer of $50 million over four years that is as close to a definition of insanity in baseball as we have witnessed since -- what? -- the Mike Hampton contract?

The Red Sox were never going to guarantee this man four years. They weren't particularly excited about guaranteeing him three years.

They know -- everybody knows -- Martinez has a tear in his labrum that's practically as wide as the San Andreas Fault. One informed estimate put that tear as 90 percent full.

So there is a stupendous chance that one of these days, Pedro will go from being Omar Minaya's most famous acquisition straight to being the Mets' next Mo Vaughn.

Minus the insurance, that is.

We surveyed a half-dozen baseball men Monday, after word of Martinez's stunning I Love New York tune began to leak around the winter meetings. The question we asked was this:

What are the chances of Martinez making it through four healthy seasons as a Met -- no muss, no fuss, no trips to the DL?

And the unanimous answer won't surprise you: Zero. None. Nada.

Pedro's clock is ticking. And the always-wary city of New York will be watching.

We wish him the best, because it has always been a blast watching him perform his inimitable magical mystery tour on every mound in America. But the way he worked these negotiations, the way he misled the Red Sox on his way to exotic Flushing Meadow, will not go down as his finest hour.

The complete details of this negotiation may never become clear. But this is how this deal went down, from what we know now:

On Saturday night, the Red Sox were just about 100 percent sure he was coming back. He had asked them to guarantee three years. So grudgingly, they guaranteed three years and $38 million.

He had asked them for perks and planes and privileges that Bronson Arroyo will never even envision, let alone ask for. But grudgingly, the Red Sox gave him virtually all that, too.

That was supposed to be that. Instead, Pedro did nothing more but use that astounding offer to squeeze more out of the Mets.

His agent, Fernando Cuza, met with the Mets on Sunday. He laid out what the Red Sox had promised Martinez. He asked the Mets if they were willing to guarantee a fourth year.

Mets GM Omar Minaya mulled it over for a while. Then, on a Sunday night that changed everything, Minaya agreed to guarantee four years, about $50 million.

Standard negotiating practice these days, according to two longtime baseball negotiators, is never to offer a deal-sealer like that fourth year without explicitly saying, "I'm only offering this if it means this deal is done."

But it appears Minaya didn't attach that stipulation -- because after that, according to sources who had spoken with the Red Sox, Cuza went back to the Boston delegation one more time.

He said Pedro was hurt and angry. Why would one team be willing to give him four years but the Red Sox wouldn't? Why wouldn't the Red Sox show him the respect he had earned after all these years?

And that was how it ended. Seven of the greatest seasons in Red Sox history.

The Red Sox won't be the same without him. There will be a little less buzz, a little less electric current surging through those Fenway nights, a little less reason to blow up an evening's plans to make sure you made it to the TV room for Pedro's starts.

But it's a funny thing. As much as the Red Sox will miss all that, they won't miss the countless days he showed up late, the obligations he dodged, the special treatment he demanded. 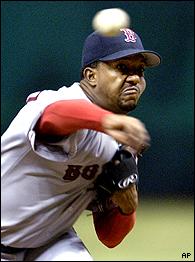 If he can get away with that in the city of New York -- where he has hardly been everyone's favorite baseball visitor, where they have reaped none of the joy he has spread over these last seven years -- more power to him.

But we are trying to imagine the back page of the Post or the News after he opted not to show up for Game 6 of an apocalyptic League Championship Series, as he did this past October. The headlines might not fit on the page.

In the end, he needed more rest and nonstop maintenance. He was still fun when he took the ball, or when he led those cheers from the dugout. But one baseball man who knows the Red Sox well predicted there would be no clubhouse uproar over this. Not a peep.

"You'll be amazed how little you'll hear those players complain," he said. "I bet you'll never hear a word -- no matter how many games he wins."

The Mets get a great pitcher -- on some nights, anyway -- and a great attraction for their new TV network. But don't ask for 120 pitches. Don't ask for nine innings. Don't ask for any emergency starts on short rest. And even regular rest may stop being quite enough.

So now, instead of those two, they have David Wells, who turns 42 next May, and a giant hole in the rotation that Pedro was supposed to fill.

They can use some of Pedro's money on Edgar Renteria, a tremendous player and more cost-effective purchase. But it appears they will take their time trying to find that last starter. Maybe Odalis Perez. Maybe Tim Hudson. Maybe some other creative Theo Epstein acquisition.

But everything that comes after this will be filed under Life Without Pedro. He made their world more interesting every moment he was around. But he might very well have made their life a lot more peaceful just by deciding he had hung around long enough.