When Randy Johnson throws his first pitch as a Yankee next April, exactly one thing will be absolutely, positively guaranteed:

The immortal Stefan Wever and Lee Guetterman (all 6-feet-8 of them) will be greatly saddened -- because they'll no longer be the co-answers to the trivia question: Who was the tallest pitcher ever to start a game for the Yankees?

But that, friends, is about the only thing His Unitness will guarantee.

If you're a Yankee hater, you should still feel free to rant, rave, grumble and mumble about (pick three): the Yankees' money, greed, egomania, Yankee-centric TV network, ticket prices, souvenir shop, parking nightmare, sound-system decibel level, owners-box guest list, yada-yada-yada -- whatever you think you have to vent about to get through this crisis.

But just remember: 10 months from now, all that angst could prove irrelevant -- because Unit or no Unit, there is still lots of stuff that could happen that could prevent the Yankees from winning the World Series.

Once again, we've been directed by the Citizens for Competitive Balance to write the Randy Johnson column everyone but YES network subscribers have been waiting for:

1. THEY'RE OLDER THAN THE NEW YORK PHILHARMONIC

When the Marlins won the World Series two years ago, their entire roster included no pitchers, only one regular (Jeff Conine) and just one bench guy (Mike Mordecai) who were born in the 1960s.

Well, the '60s haven't gotten any more recent since then -- and you can look that up. But the 2005 Yankees, as currently constituted, will include (gulp) 13 players born in the '60s, a total of 19 players who will be 30 or older by Opening Day and (barring a Carlos Beltran signing) an entire starting lineup of guys who will be 30-something by the end of July.

We've never commissioned the National Athletic Trainers Association to do an exhaustive study of this, or anything. But one thing we still feel safe in saying is:

Which could be great news for, say, Bubba Crosby, but possibly not-so-great news for several George Steinbrenner employees we can think of.

No one on this team, however, is older than the Unit himself. He'll be 41 Opening Day. He'll turn 42 by the playoffs. And he'll be 44 by the time his new contract extension expires.

OK, here's another one: How many years has it been since a non-knuckleballer won more than 13 games in a season at age 43 or older? Oh, only 77 -- since Jack Quinn did it in 1928. During the Calvin Coolidge administration.

Even the seemingly ageless Spahn won just 13 games the rest of his career after a 23-7 season in 1963, at age 42. So history tells us the Unit is a much better bet to self-destruct than he is to go 24-3. (Consumer note: This offer not guaranteed.)

Yes, friends. Cartilage is, in fact, good. That's one of our mottoes in life.

We bring that up because the amount of cartilage currently found in Johnson's right knee would be approximately ... uh ... zero.

The last vestiges of that cartilage were yanked by surgeons after the 2002 season. Which led to a 2003 season in which Johnson went 6-8, 4.26, and spent three months on the disabled list.

Of course, had the Unit had another season like that in 2004, there wouldn't be much need for us to write this column. So the pursuit of accuracy compels us to report that he was able to compensate last year by getting regular injections of (and this is an actual medical term) elastovicous fluid in that knee.

And 290 strikeouts later, he was elected president of the Elastovicous Fluid Fan Club. (Which is an unpaid position, as far as we know.)

If Johnson duplicates that season this year, there's a good chance Joe Torre and Brian Cashman will be appearing in elastovicous-fluid commercials by Thanksgiving. But sooner or later, all 6-foot-10 guys are likely to miss their own personal cartilage. And sooner could, very conceivably, arrive this summer. (Key word there: conceivably.)

3. THEY DON'T GET TO PLAY THE BREWERS

The journey from the National League over to the American League doesn't look particularly perilous, in theory. No native guides, body armor or special inoculations are required by law before you embark, so it would be easy to conclude it's not that big a deal.

Except we can also think of four reasons to conclude otherwise:

What do those four have in common? They were the four most prominent starting pitchers not named Curt Schilling who traveled from the National League to the American League last winter.

Schilling, on the other hand, survived the journey slightly better, as you may have noticed -- going 21-6, 3.26, despite a soon-to-be-famous bum ankle which bugged him much of the year. 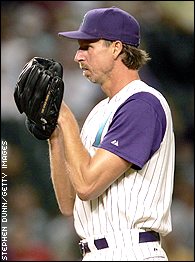 But accompanying him on this trek are two other prominent National League refugees -- Carl Pavano and Jaret Wright. And suppose their transition to AL life follows the model of those non-Schillings?

Pavano is coming from one of baseball's most pitcher-friendly ballparks (Florida's Pro Player Stadium), where he pitched in front of one of the best defenses on earth. You might also want to note he has won more than 12 games exactly once in his career.

Wright, meanwhile, is leaving a team (the Braves) that sprinkles all new pitchers with special Cy Young miracle flakes. So no wonder he won nearly as many games last year (15) as he had in the previous five seasons put together, stayed healthy all year and had an ERA (3.28) more than two runs lower than his lifetime American League ERA (5.50).

And if they don't, who knows where Steinbrenner will want to banish them to -- the Hanshin Tigers?

Which is one way of saying that this team did, in fact, have other issues heading into the winter besides its lack of left-handedness on that pitching mound.

What happens, for instance, if Jason Giambi shows up for work, declines all invitations to make himself invisible and spends another season in expensive, but not particularly useful, limbo? 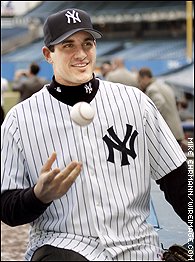 What happens if Tony Womack, now in charge of second-base affairs, reverts to being a .226 hitter again?

What happens if the Yankees don't sign Carlos Beltran -- and Bernie Williams continues to regress as a defensive center fielder?

What happens if Kevin Brown can't make it to the mound 30 times -- a feat he's accomplished exactly once in the last four seasons? Or what happens if, this time, the wall punches him before he punches first?

What happens if Gary Sheffield's shoulder keeps barking, or he finds some more ligaments to tear, or his BALCO testimony raises some federal prosecutor's eyebrows?

What happens if Wright turns out to be a one-year wonder, or Mike Mussina's elbow aches, or a bullpen full of 35-36-37-year-olds feels its age?

Yeah, we know what usually happens: The Yankees go out in June and trade for Jason Schmidt, Barry Zito, Ben Sheets, Juan Pierre and Paul Konerko.

But in case you hadn't caught on, the upper levels of this farm system are now thinner than Lindsey Lohan. So there's almost nobody to call up should all those old-timers get hurt -- and not much to use as trade bait to accumulate the next object of Steinbrenner's affection. Which is very dangerous for a team that essentially has been ordered to win the World Series.

Then again, we said the same thing last year, too. And that didn't stop them from trading for some guy named Johnson.

These Yankees are definitely the best team 207 million George Steinbrenner bucks can buy, all right. But in the long and glorious history of baseball, not one $207-million baseball team has ever won a single World Series. That's a fact.

OK, so it's also a fact that there has never actually been a $207-million baseball team before this one. But that's beside the point. Sort of.

If the Yankees have proved anything these last few Octobers, it's that there can be such a thing as having too many big-name, big-dollar players on one team.

The Yankees of 1996-2000 were a baseball team, not a Rotisserie team. They were about fitting all the pieces together, not fitting all the glittering 12-page bios into one 600-page media guide.

The Yankees of 2002-2004, on the other hand, have clearly been a team majoring in something other than chemistry. They kept accumulating All-Stars -- not rings.

What exactly did Mike Mussina guarantee them? How about Jason Giambi? Hideki Matsui? Gary Sheffield? Even (shudder) A-Rod?

This team committed nearly 400 million dollars just to those five guys over the last five offseasons -- and not one stinking shred of tickertape has landed on any of their heads.

So does Randy Johnson make these Yankees scarier, more imposing and (as accountants everywhere have noted) more expensive than they were before he arrived? Absolutely.

But so did A-Rod. So did Mussina. So did Giambi. So did many of the highly compensated gentlemen around them. But all the proof the Yankees need that funny stuff can still happen in October is that 6-foot-10 left-hander they just acquired -- because he has won one more World Series over the last four years than they have.