TAMPA, Fla. -- The Biggest Yankees Acquisition of All Time thinks he knows what he's getting into.

To which we can only say to the great Randall D. Johnson: We'll see.

The Biggest Yankees Acquisition of All Time thinks the expectations he's dealt with all his life have been a spectacular training ground for life as a George Steinbrenner employee.

After five Cy Youngs, 246 wins and 4,161 strikeouts, The Biggest Yankees Acquisition of All Time says he doesn't know "how much more I have to prove."

To which we can only say: Well, he's about to find out. We can sure guarantee him that.

We heard these remarks, we thought these thoughts, on Tuesday, the day the Yankees introduced the first 6-foot-10 person they've ever traded for, to his new life inside the daily Yankees soap opera.

No cameras got mauled. No questioners got stared down. No voices were raised. This was Randy Johnson at his friendliest, most congenial, most amusing best.

It is a side the Unit doesn't always show us common members of the public. But the more he displays it in this place he couldn't wait to pitch in, the better off he'll be.

And the fewer TV guys who wind up with a camera sandwich for lunch, even better yet. But then, you'd probably already figured that out.

This was a day for Johnson to get lost on the way to Legends Field, drive around the parking lot in confusion a few times and act eminently human.

That kind of thing is allowed on a guy's first day as a Yankee, of course. Which must have come as a biiiggggg relief to Mr. Unit ... knowing that he'll only have to be superhuman on all the rest of his days as a Yankee.

Yes, it's always a tricky deal showing up at a new address, knowing you've already been penciled in as The Official Savior.

The only good news for the Unit is, he's run that drill before -- in Houston and Arizona. And his report card so far shows straight A's in saviorism. Which is a terrific claim to fame.

Except there's something he ought to know: Nobody in Yankee Land cares half an iota about that.

In Yankee Land, you know, nothing counts until you do it as a Yankee.

The rest of a guy's career? They might take that into account when they figure how much to put in his paycheck. Other than that, it's the equivalent of a little pregame stretch before his real career (in pinstripes) begins.

That ain't fair. But Randy Johnson says he can handle that.

"I understand the responsibility here," he said Tuesday. "And I'm not going to shy away from that."

Well, here he is. Let the fun begin. 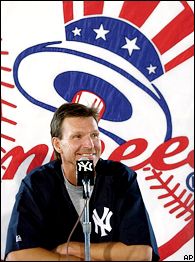 But is he really ready for all that Being A Yankee entails? Johnson is pretty sure he is. So he probably doesn't want to know the one thing we've learned over the years is this:

Nobody is. Not right away.

Not A-Rod. Not Mike Mussina. Certainly not Jason Giambi. They all arrived much like the Unit did. They were honored to wear the uniform. They were thrilled to take those never-ending Steinbrenner dollars. They were looking forward to everything life as a Yankee had in store.

Until the store actually opened, that is.

Then it turned out it wasn't quite as much fun as they'd envisioned.

Win. Win some more. Win even more than that. Be greater than he has ever been. (Is that possible?) Especially on crisp autumn evenings in October. Be tough. Be accountable. And then win some more. And some more.

The Unit thinks that sounds a lot like what has always been asked of him. He may think wrong. But at least he has logical reasons for believing that.

"Any time I've taken the mound," he went on. "it's always been the old Samson-and-Goliath story written about me."

OK, so he meant David and Goliath. Samson was too busy running around with Delilah to get a good swing at Goliath's slider. But we get the idea. Randy Johnson has certainly lived life as Goliath. No disputing that.

What he hasn't begun to comprehend yet, though, is that there's no Goliath alive like the Goliath who sits in the Yankees' owner's box.

The guy in that owner's box isn't going to care that Johnson is 41 years old. The guy in the box only cares that he just extended a 41-year-old pitcher's contract through 2007 at 16 million bucks a year. And that's insanity.

So with all due apologies to Jason Giambi, and Alex Rodriguez's pursuit of redemption, and all these other new Yankees pitchers, the most important story in the Yankees' universe over these next eight months is whether the 6-foot-10 guy can do what he was brought to the Bronx to do.

Johnson has struck out at least 290 hitters in a season nine times. All the Yankees pitchers in history have done that no times. (Team record: 248, by Ron Guidry.) Just four Yankees left-handers (Guidry, Whitey Ford, Al Downing and Lefty Gomez) have ever climbed within 100 of that.

Johnson has won 20 games three times. Since Ford retired in the '60s, the only Yankees left-handers to win 20 are Guidry, Tommy John, Andy Pettitte and Fritz Peterson.

Johnson once won four Cy Youngs in a row. Which would equal the number won by Yankees starters in the history of the award.

So you see what we're getting at here: Randy Johnson brings this team a dimension it didn't have last year (or many other years, for that matter), a dimension that might have changed everything (by which we mean Games 4 through 7 of the ALCS).

"When Randy gets out there his one day or two days a week, he adds a whole new element," said reliever Paul Quantrill. "Any time he starts a game, you expect him to dominate."

But what Johnson will soon begin to comprehend is that there's a difference between this general expectation, which he's lived with forever, that he can (and probably will) dominate his opponent du jour, vs. the kind of expectation he faces now.

This is no general level of expectation he's about to run into in the Bronx. He won't be expected to dominate for the Yankees because he has, or because he can.

He'll be expected to dominate now because he has to. That's what he's doing here. He has been brought to this time, this place, this team because the entire season has been built around the concept that having a nonstop, relentless, left-handed dominator is merely the key to everything.

Remember, these Yankees passed on Carlos Beltran because they thought what the Unit brings them was, and is, more important. That was their most pivotal decision of the winter. So now it's up to Randy Johnson to make them look brilliant. That's all.

Is he really ready for that?

"I've never backed down from a challenge," he said Tuesday. "I know what's expected of me."

He says he does. He thinks he does. But he doesn't. Not really. Not until he's lived it. Nobody knows until they've lived it.

Well, he'll be living it for the next eight months, all right. And if we ask him all these same questions at the end of that road, we bet the answers won't sound anything like they sounded on a sun-splashed Florida afternoon in February.