ST. PETERSBURG, Fla.  To us, it's just a trophy. To Johan Santana, it's more. More, in fact, than we can even comprehend. 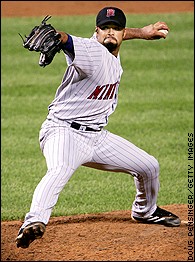 To Johan Santana, however, winning the American League Cy Young last season was an event that changed his life, changed his team, changed his country and changed the mountain town in Venezuela that had never produced a professional baseball player before him.

We are talking about an award that inspired parades, medals and dinner with the president (of Venezuela, that is). So, clearly, we are talking about something that meant a whole lot more in Johan Santana's homeland than an excuse to call a talk show.

"My country is a real baseball country," said the Twins' first Cy Young winner since Frank Viola. "You know, people there are looking at you as a hero, as an idol. What I'm doing is just having fun, just doing what I do. But knowing [what his people think of him], it gives me more energy to go out and perform. Playing baseball is something that makes me feel good. But it's something that makes them feel good, too."

Yes, this is the ultimate feel-good story, all right  for everyone but the hitters.

For the hitters, facing Johan Santana last year made them feel about as good as a House subpoena.

"It's fun just to hear the hitters when they get up there," said Twins catcher Matt LeCroy, "because they don't want to hit off him. You hear guys dig in, saying, 'Well, here's an 0-for-3.' "

And by the time he was through, Santana had spun off one of those seasons that isn't just once in a lifetime. For most of the human race, they're no times in a lifetime.

At age 25, in his first full season as a starting pitcher, he finished the year 20-6, with off-the-chart numbers all over his stat sheet. We can put it in perspective this way: