Who knows what champions are made of?

It isn't always money. Even in baseball.

Just ask the Yankees. Ask the Red Sox. Ask them how terrified they were last year of playing the best little low-budget team on our planet -- those Minnesota Twins, the team that is going to win the World Series this year.

"I remember last September, when we were playing the Red Sox," Cashman says. "I was talking with (Sox GM) Theo (Epstein). And we were saying, 'Boy, we sure don't want to play Minnesota.' We were both saying the same thing. The frustrating thing for us was, we had the best record in the league and we had to play Minnesota. Not that the Angels were any fun, either. But nobody wanted to face Minnesota."

"Last year when we were coming down the stretch, I'm thinking, 'I don't want to see Johan Santana twice in that first round,'" Francona says. "If Santana comes out and throws two shutouts at you, you're in big trouble. Look at the Yankees series. I think he did throw about 1½ (shutouts)."

And the Yankees were, in fact, in big trouble. Nobody remembers it anymore, thanks to the trouble the Red Sox wound up dealing them. But the Yankees were two outs away from trailing the Twins in the Division Series, 2-0 -- and about to head to Minnesota for Games 3 and 4.

Asked how often he thinks about how close his team came to plummeting into that canyon, Yankees manager Joe Torre laughs.

He thought about it all winter. Now he can think about it again all summer -- because six months from now, after the Yankees and Red Sox have finished obsessing about each other, the Twins figure to be waiting for one of them again, hiding out innocently in baseball's October minefield.

"Scary," Torre says of that prospect. "Minnesota scares us because they can pitch. That's why they've won their division three straight years. That's why they've been so successful. You don't have to spend $200 million, as long as the money you've spent on pitching is well-spent."

The secret to the success of the Twins, though, is that all their money is well-spent.

They might work with just a third of the Yankees' payroll, and about half of the Red Sox's, but the Twins have built something special and durable.

What they've built, says one American League scout, is a system that has turned them into "the Patriots of baseball."

The team is always bigger than any individual.

The payroll is always modest.

They're the best in the business defensively.

And the system -- relentlessly plugging talent into whatever holes are vacated by the players who move on every year -- works.

It does to us. But Twins GM Terry Ryan visibly squirms through that Patriots-of-baseball talk for one very basic reason: "Unfortunately, we haven't won anything," Ryan says.

Well, no -- not yet they haven't. But don't let all the Yankees-Red Sox mania fool you. The 2005 Twins are a team built to win -- over the long haul, over a short series. They have a formula in place that can easily lead them down a November parade route.

Depth in the rotation.

Maybe the deepest bullpen in baseball.

The all-web-gem team on defense.

And big-game players who have begun to accumulate enough postseason experience that they no longer fear anyone.

"You know what?" says Ron Gardenhire, the most underappreciated manager alive. "If you don't lack for pitching and you can catch the ball, I've never heard of too many times where that formula didn't work."

Not that the Yankees' formula might not work just as well, you understand. For 200 million bucks, heck, it ought to work. But the Yankees have found out these past four years that all their dollars can't control the tumbling dice of October baseball.

"Anything can happen," Cashman says. "And believe me, it could just as easily have happened for the Twins as anybody else the last two years."

Those deep checking accounts in Boston and New York might show up in experience, depth and sheer recognizability, but Cashman doesn't buy this notion that cash flow necessarily makes his team better than the Twins.

"We're just constructed differently," the Yankees GM says. "In recent years, we've used free agency to patch our holes. They've had some tremendous drafts, and made some great trades, and they've paid off. For every Joe Nathan they bring in, I have a Tom Gordon. They developed a Justin Morneau. We signed a Tino Martinez. It's just a different approach."

The Twins, of course, see it a little differently.

"When you're playing them," Gardenhire chuckles, "you're looking at these guys. And after you finish facing a three-time All-Star, now here comes a four-time All-Star off the bench to pinch-hit for a two-time All-Star. It's something to see, I'll tell you.

"But you know what? We enjoy what we're doing with this ball club, watching some of these young men come up and develop into big leaguers. We're just a small-market team trying to do it our way."

Then again, they have to do it their way, because they sure can't do it the Yankees' way. But lots of teams talk about winning with scouting and teaching and selflessness. The Twins, though, are the standard those other teams are trying to duplicate. They are to that approach what the Yankees are to check-writing.

"I guess the big thing," Ryan says, "is that we're unselfish. Everyone from the manager, the coaching staff, the players, the front office, the scouts, the minor-league people -- we don't have much interest in that 'me' attitude. We're more interested in the final result. We're more interested in being unselfish. That's the way it's supposed to be, isn't it? I don't think it should be a rarity. If it is, that's not right."

But it is. And the Twins' success in engraining it shows up in the amazing chemistry with which this team works and plays. Ryan and Gardenhire set that selfless tone at the top, and even their best players embody it every hour of every day.

"We do have stars," Gardenhire says. "We have Torii Hunter, Brad Radke, Johan Santana, Jacque Jones and Shannon Stewart. So we have stars -- but they don't play that way. They don't look for the spotlight. They just like being part of it.

"And the two (position players) who have been here the longest -- Jacque and Torii -- play as hard as anybody. They run balls out. They do everything right. It's nice to have that kind of clubhouse, where guys understand how we play coming in. They understand what we're trying to do."

So many of these players came through the system together -- won together, lost together, grew up together -- that there is a cohesiveness to the Twins that you don't find everywhere. They just exude "team" -- much like the Super Bowl champs.

"I like that comparison," Hunter says. "This was the year a lot of people said the Patriots were going to lose, but look what they did. They didn't have the best talent. But they made the best of what they had, and they played good defense. And that's our thing. Play defense. Play the game the right way. We're always the most underrated team out there. People say we're an aberration, we're a fluke. But you know what? Every year we do it." 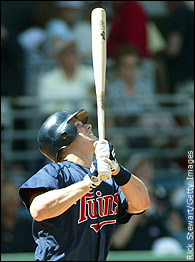 And this year, more than ever, they have that certain look about them.

Santana has matured into the best pitcher in the whole sport -- a left-handed dominator of whom Cashman says: "If I needed a Game 7 starter and you told me I can pick anyone out there, he would be the guy."

And behind him there is Radke, coming off a season in which he finished fourth in the league in ERA (3.48) and in which only Santana and Curt Schilling allowed fewer baserunners per nine innings.

They're followed by three starters who all have won at least 14 games in a season -- Kyle Lohse, Joe Mays and Carlos Silva -- and a bullpen featuring power arms, left-right balance and one of the sport's best young closers (Nathan).

There are some worries about an offense that finished fourth in the division in runs scored, isn't particularly selective and hasn't produced a 30-homer man in 18 years. But the emergence of Morneau (41 home runs last year between Triple-A and the big leagues) and the breathtakingly talented Joe Mauer (owner of a .407 career minor-league on-base percentage) could help reshape both of those chinks.

And if they need help, scouts gush about their prospects not too far over the horizon -- particularly pitchers Scott Baker and J.D. Durbin, and outfielder Jason Kubel.

"We have the pieces in place," Gardenhire says. "Now we just have to produce."

This is a team that has every right to be envious of the Yankees and Red Sox. And in a way, it is. But not how you think -- because it isn't their resources Terry Ryan envies.

"Yeah, I get jealous -- when I see them in the World Series," the GM says. "We've gone to the playoffs. We've been to the first tier. We've even been to the second tier. But then, when you watch them play that seven-game set in the third tier, that's when the jealousy sets in -- because that's where you want to be."

And this year, you get the feeling, they've set the bar higher than ever before. It isn't just enough for this team to make another cameo in the first week of October anymore. These Twins have bigger aspirations.

"We know what we're working for," Ryan says.

Well, we have a feeling this just might be the year, too: The year the ultimate "we" team sneaks around the gargantuan "me-me-me" shadows of the Yankees and Red Sox. The year the Minnesota Twins prove they really are baseball's Patriots.