What are the chances that Barry Bonds can still break Hank Aaron's home run record?

Well, it's time to change the subject (at least for the next minute and a half).

Because it may turn out we've devoted all that debating to the wrong guy.

On Wednesday night at Miller Park, Alex Rodriguez became the first player in history to hit his 400th home run before the age of 30. Let's try to give you some perspective on what that means. 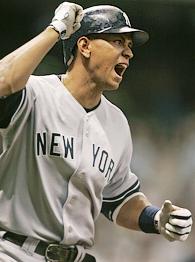 • That's two years and three months younger than Aaron was when he hit No. 400.

• It's almost two and a half years younger than Willie Mays was when he hit No. 400.

• It's four years and two months younger than Bonds was when he hit No. 400.

• It's four years and seven months younger than Mark McGwire was when he hit No. 400.

Or think about this another way. A-Rod could blow out his knee, or have Tommy John surgery, or find some other reason not to play another game until 2007  and still have more home runs than any of those guys had at the same age.

But since we haven't seen Dr. James Andrews lurking around his locker lately, we're assuming that won't be happening. So as Barry pops his antibiotics and does his knee stretches, Alex Rodriguez just keeps on making those home run trots.

Another 355 of them, and he and Hank can do a MasterCard commercial.

But what are the odds that A-Rod can actually hit another 355 home runs? Even at his young age, they're not as good as you think.

For one thing, let's remind you that 355 home runs is a gigantic number of homers. It's more than Boog Powell, Dick Allen, Darryl Strawberry, George Brett, Dave Parker and about 400,000 other men hit in their whole careers, as a matter of fact.

And the other thing we all need to remind ourselves  always  is that we have no idea (NONE!) how many seasons, how many at-bats, how many opportunities Alex Rodriguez will get, over the rest of his career, to break that record.

Maybe he'll keep cranking out big home run years into his late 30s and early 40s, like Aaron and Bonds. But the odds say he won't.

Mays and Mickey Mantle started sliding precipitously at age 36. McGwire was done at 37.

And then there's Junior Griffey.

Could Griffey's career, before age 30, possibly have been more A-Rod-esque? He was the No. 1 pick in the draft and arrived, as a teenager, in Seattle. He hit 398 home runs before his 30th birthday. He'd had a few freak injuries in his 20s, but nothing ominous.

And then, just as we were all about halfway through our big Why Junior Will Pass Hank term papers, you know what happened:

Maybe that will happen to A-Rod. Maybe it won't. But not even baseballpsychic.com can tell you that answer. That part is up to the baseball gods.

So all we can do is look to the past for guidance. And that's what we did. We studied what happens to the great sluggers after they blow out the candles on their 30th birthday cake. The results are fascinating:

• Of the top 10 names on the all-time homer list, nine of them had a season that produced the best home run ratios of their careers after they turned 30. So that's good.

• But only two of them (Aaron and Bonds) had that season in their late 30s. So that's bad.

• Of those same 10 hitters, eight (all but Frank Robinson and Harmon Killebrew) hit more home runs after turning 30 than before. So that's good.

• But of the top 15 no-longer-active players on the Most Homers Before Turning 30 list, a whopping dozen (everyone but Aaron, Ruth and Mays) tailed off and hit fewer homers after 30 than before. So that's bad.

• Since A-Rod is still about a month and a half from turning 30, let's assume he would need to hit "only" 340 homers after age 30 to catch Aaron. At least that's not unprecedented, since six players in history have done it: Bonds, Aaron, Ruth, Mays, McGwire and Rafael Palmeiro. So that's good.

• But none of those six was a middle infielder or third baseman  positions that tend to produce more physical wear and tear than the outfield, first base or DH. Just two players who primarily played shortstop even hit 200 homers after age 30  Ernie Banks (243) and Cal Ripken (211). The only third baseman to make a run at 340 was Mike Schmidt (314). So that's bad.

• And we shouldn't forget where Rodriguez plays  i.e. Yankee Stadium. The reason this is still the House That Ruth Built is that no right-handed hitters have ever threatened to foreclose on the Babe. The only right-handed slugger who played more than five years in Yankee Stadium after age 30 and approached 300 post-30 home runs was Dave Winfield (298). Joe DiMaggio never even hit 150. Hmmm. Maybe A-Rod should ask to get traded again.

So what does all this say about Rodriguez's chances of passing the Hammer?

For that answer, we asked Dan Heisman, a sabermetrician who for years has used Bill James' formulas to analyze active players' odds of achieving certain milestones.

What did Heisman find? That Rodriguez doesn't even have the best chance of any active player to set this record.

Theoretically, Bonds still does (a 78-percent chance), mostly because he's so close. But of course, we don't know where Bonds' physical, legal or tax-investigation highways are leading him. So let's just say no mathematical formulas apply to him at the moment.

That would leave A-Rod as the next most likely  at 40 percent  followed by Sammy Sosa (a fast-dropping 25 percent), Albert Pujols (15 percent). Jim Thome (11 percent) and Manny Ramirez (4 percent).

So obviously, of the candidates not named Bonds, A-Rod has put himself in much better position than any other active player. But even that 40-percent calculation tells you he's a stronger bet not to catch Aaron than to catch him.

So as A-Rod celebrates No. 400, feel free to applaud the feat and savor the moment. Then it'll be time to kick off this very argument at a tavern near you.

Why do we have a feeling we'll still be kicking at it in the year 2013?