<
>
Stark: Indians continue to 'roll'
Cleveland Indians
16yJayson Stark
Ortiz accepts Hall call; Bonds, Clemens shut out
Philadelphia Phillies
7hBradford Doolittle
AB to pursue legal action against Buccaneers
Tampa Bay Buccaneers
2hJenna Laine
Clips do it again, rally from 35 down to stun Wiz
LA Clippers
34mOhm Youngmisuk
Saints' Payton steps away, unsure of what's next
New Orleans Saints
11hMike Triplett
Sources: Louisville in talks to separate with Mack
Louisville Cardinals
6hJeff Borzello and Pete Thamel
Rodgers hints his decision likely by tag deadline
Green Bay Packers
8hRob Demovsky
Auburn survives in 1st game ever as nation's No. 1
Auburn Tigers
2h
Collins, Swiatek round out Aussie women's semis
4h
Hall of Fame voting winners and losers: David Ortiz gets in, who else got good (or bad) news?
Boston Red Sox
7hESPN.com
What makes David Ortiz a Hall of Famer? Stories from those who know him best
Boston Red Sox
7hESPN.com
Sean Payton put the New Orleans Saints in a 'better' place, but what's next?
New Orleans Saints
3hMike Triplett
Why Sean Payton's shadow will loom over Cowboys' Mike McCarthy
Dallas Cowboys
6hTodd Archer
32 NFL teams, 32 big free-agent decisions: Which players will return to their 2021 team?
Green Bay Packers
18hNFL Nation
Dustin Johnson, Justin Thomas and Rory McIlroy all looking for different levels of better
17hMark Schlabach
How to watch the PGA Tour's Farmers Insurance Open this Wednesday-Saturday on ESPN+
17hESPN.com
'Sirens are not unusual at AFCON': Inside the stadium disaster in Cameroon
5hEd Dove
Is it dribbling or is it showboating? And where do you draw the line?
13hJulien Laurens
USMNT favors frigid forecast, but will it yield home-field advantage?
13hJeff Carlisle
No Azteca fans? No Flores call-up? Mexico faces tough task ahead of crucial World Cup qualifiers
10hCesar Hernandez
'It's not about the talent': Patrick Ewing and the battle to avoid another lost season at Georgetown
Georgetown Hoyas
18hMyron Medcalf
Do the New York Giants need an experienced head coach to pair with rookie GM?
New York Giants
19hJordan Raanan
Will Jon Jones be the next challenger for the UFC heavyweight championship?﻿
2dMarc Raimondi
MLB lockout latest: What can we expect from this week's negotiations?
9hJeff Passan and Jesse Rogers
Time will tell if Villa's gamble on Coutinho pays off for both sides
20hIan Darke
Balotelli's back! What has Italy striker been up to during international exile?
17hChris Wright
Transfer Talk: Tottenham's Dele Alli wanted by five clubs in January window
7hLuke Thrower
Which players could move before the January window closes?
2dMark Ogden
Breaking down the 2022 girls' McDonald's All American basketball recruits
Georgia Lady Bulldogs
9hShane Laflin
Transgender swimmer Lia Thomas stays the course
3dKatie Barnes
Sep 20, 2005

CHICAGO -- This can't be happening. Can it?

A 15-game lead, melting like the polar ice caps?

A magical season, turning messier than a mudslide?

This can't be happening. But it is. It's happening to those Chicago White Sox. Right before our eyes. 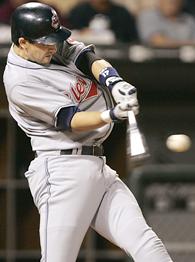 Seven weeks ago, the White Sox were 34 games over .500 -- and the Cleveland Indians were four over. Four.

So everybody who figured they'd be waking up on the morning of Sept. 20, finding those same two teams suddenly separated by 2½ games, raise your hands. We'd like to come hang out with you on your next trip to the Powerball machine.

But that's where these White Sox and these Indians stand right now -- 2½ games apart. With nearly two weeks of this season left to be played. With five more games left against each other. Amazing.

That gap shrunk by yet another game Monday night, from 3½ down to 2½, on a pulsating pennant-race evening on the South Side of Chicago, when these two teams finally met for the first time since July.

It shrunk on the second-biggest hit in the life of the legendary Aaron Bleeping Boone -- a two-run, eighth-inning, game-winning single off a man throwing 99 miles an hour (White Sox smokeballer Bobby Jenks).

It shrunk when a spectacular, roller coaster of a game ended Indians 7, White Sox 5.

But most of all, it shrunk in a way that made you wonder: Could it possibly shrink any more?

"You know what?" Boone would say later. "I know no one believes me. But we don't really care. We just want to keep playing the way we've been playing."

OK, we know he really, truly means that -- but let's rephrase that remark for him:

The Indians, as a point of philosophy, don't particularly want to care about those standings. But they're at a point now where they're not allowed to forget them -- because those of us who do care are rude enough to bring them up every 12 seconds.