CHICAGO -- We know that only Red Sox, Yankees and Vlad Guerrero are supposed to be allowed into MVP debates this time of year. But ...

If it's OK with the usual suspects, we need to shove a new name into the argument: 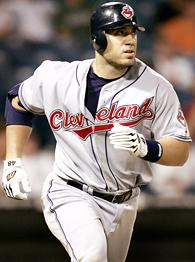 We apologize if he doesn't wear pinstripes, doesn't create offseason mob scenes when he visits Disney World and wouldn't be recognized by about 9.8 billion Americans if he sat down next to them at lunch. But ...

This week, on the South Side of Chicago, in the biggest series of the Cleveland Indians' season, Travis Hafner had himself the kind of September series that MVPs are made of.

Four home runs -- at least one in every game of the series.

And 10 RBI. In 12 at-bats that might have changed the course of events for both the Indians and that White Sox team they were playing for those three nights.

Wednesday night, in a potentially season-turning baseball game, he finished off the Travis Hafner Show with two more home runs and five more RBI in an 8-0 Cleveland wipeout of a White Sox team that saw its AL Central lead squished back to 2½ games over the rampaging Indians.

And when he was through -- not to mention when his team was through taking two of three, to push the S.S. White Sox one more fathom closer to the iceberg -- one of Hafner's teammates found himself in the midst of an eerie MVP flashback.

Six years ago, you might recall, Kevin Millwood was working for a certain team in Atlanta when a guy named Chipper Jones had a series that still lives in MVP lore.

In a very similar late-September setting, the Chipster went 4-for-9 in a pivotal three-game sweep of the second-place Mets, with four homers and seven RBI. And two months later, thanks almost solely to the powerful image of that series, The Man They Don't Call Larry had an MVP award sitting in his trophy case.

OK, lurch forward back to Wednesday. To Kevin Millwood, now six years and three teams down the baseball highway. To a man who couldn't help but take a little journey through the vaults of his memory bank -- all because he might never forget these three days in the life of Travis Hafner.

"This reminds me a lot of that series Chipper had," Millwood said. "Travis pretty much threw us on his back and let us ride on it this whole series."

We'll acknowledge just two minor hitches in that Hafner-Chipper comparison: 1) the Indians only won two of these games, not all three (not that that was Hafner's fault), and 2) Hafner was actually better in this showdown than Jones was in '99. Of those seven hits Hafner got, after all, every one of them drove in a run.

But it was the first of his two homers Wednesday that we may look back on some day as the defining moment in Hafner's ascent to stardom.

It was the eighth inning. The Indians held just a 2-0 lead, which didn't loom real large in a series in which no previous lead had managed to hold up for more than about 15 minutes.

There were two men on base. The biggest throng of the series (36,543) was shredding what was left of its vocal tissue after Hafner immediately fell behind White Sox starter Jon Garland, 0 and 2. And ...

Little did they know Hafner had Garland right where he wanted him.

Heading into this game, in situations this year in which Hafner got down in the count 0-2, he was hitting a ridiculous .312, with an .891 OPS. (If it tells you anything about what that means, that's a higher OPS than Gary Sheffield has in all situations.)

"When you get down to two strikes and you know it's a big situation," Hafner would say later, "you just try to shorten your swing."

So he shortened up to try to stay alive. And next thing you knew, that count was 3-and-2. And it was the eighth pitch of the at-bat. And Garland was thinking maybe it was time for a sneaky fastball, after getting Hafner out all night on changeups. And ...

Hafner unleashed his magic bat one last time. And the baseball took off in a hurry, toward deep center field. Back motored center fielder Aaron Rowand, waiting for this thing to come down -- until, much to his shock, the center-field fence got in the way.

The baseball clanked off the green hitters' background in nearly dead center. The Indians led, 5-0. And it was officially safe to change the channel over to Law & Order.

Not everyone in this sport understands the art of rising to meet moments like that moment. But Travis Hafner clearly does, because he has been doing it for this team for months. If he knows the secret to that art, though, he'd be the last man on the planet to reveal it.

Asked what it was about him that enabled him to do these things at times like this, Hafner couldn't backpedal fast enough. His answer: "I just want to win games. I think everyone in this clubhouse wants to make it into the postseason. And in this stretch of games where we've played such good baseball, different guys have stepped up every night."

And that about did it for Travis Hafner's MVP campaign speech.

So we'll just have to make one for him.

Thanks to a Mark Buehrle pitch that conked Hafner in the cranium in July, sent him to the disabled list with a concussion and shoved his season off the tracks for a month, this man doesn't have the pure numbers that A-Rod or David Ortiz have. There's no denying that.

But thanks to that concussion, Hafner also has made more than 100 fewer trips to the plate than either of those guys. And even after he came back in August, "he wasn't quite the same for three or four weeks," said his buddy, Aaron Boone.

"You take that time he missed and figure out what his stats would be," Millwood said. "And I'm sure he'd be right in the middle of that (MVP) conversation."