The best manager in baseball has never had a best seller written about him. Has never hosted "Saturday Night Live." Has never been spotted hanging out with John Fogerty, Hugh Jackman, Huey Lewis, Lorraine Bracco or Kermit the Frog.

No, for the best manager in baseball, it's enough just to show up every year and inspire Wilson Betemit to play like Eric Chavez, and Jorge Sosa to pitch like Pedro Martinez.

And win, of course. Every single year. 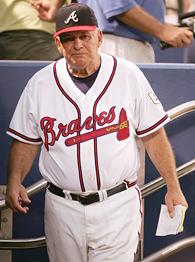 "What I wonder," says Braves ace John Smoltz, "is why does everybody know everything about Joe Torre and Tony La Russa -- but not Bobby Cox?"

"Actually," Smoltz laughs, "I think I know the reason, but I don't need to say it."

And then, naturally, he says it, anyway.

"Bobby is so unassuming and humble, he'd much rather have no credit whatsoever. So with each passing year, we have to do what we can to make people notice."

Well, those Atlanta Braves may finally have pulled that off this year. 'Bout time.

Any minute now, somehow or other, the Braves are going to clinch their 14th division title in a row. Even in a year in which they've used 17 rookies, 13 of whom had never before appeared in a single big-league box score.

Even in a year in which the manager has had to write the name of at least one rookie on his lineup card every day since May 28.

Even in a year in which the Braves had to waste 142 at-bats on Raul Mondesi.

Did it stop them? Did it matter? Does it ever matter to Bobby Cox?

"The thing about Bobby," says outfielder Brian Jordan," is he doesn't panic. This year was one of his biggest tests as a manager in his career, with all these young guys. But he just stuck with them. And that's why we're in the situation we're in."

Of course, this is the situation the Braves are always in this time of year. Whether their payroll is $100 million or $80 million. Whether their closer is John Smoltz or Kerry Ligtenberg. Whether their No. 4 starter is Kevin Millwood or Damian Moss. Whether they're being chased by four teams or none.

But we would argue that the biggest reason is the manager, Robert J. Cox.

The best manager in baseball.

That best-manager-in-baseball title is not an honor we bestow haphazardly, by the way -- because, in case you hadn't noticed, this is the Golden Age of Managing. Or at least the most golden age since somewhere around the Korean War.

By next Memorial Day, barring something shocking or Steinbrenner-esque, three of the top 10 names on the all-time managerial win list will be active managers -- La Russa (No. 3), Cox (No. 6) and Torre (No. 13 now, but only 32 wins out of 10th place).

If you factor in all of Torre's champagne showers, you could make a case for him, La Russa or Cox as the class of the current managerial field. But with no slight intended to those other men, we would argue for the manager of the Braves, as he concludes his most spectacular managerial job ever.

So here they come -- five reasons Bobby Cox is the best manager in baseball:

1. He leads the league in turnovers
Is there any kind of team Bobby Cox can't win with?

And then there are all those closers spinning through his bullpen's revolving door.

Joe Torre has had Mariano Rivera around to wrap up his show for nine seasons now. Cox, on the other hand, has had more closers than coaches.

"He hasn't quite had one [closer] a year," says GM John Schuerholz, "but only because Smoltz did it for three years."

The turnover Cox has lived through hasn't just been in his bullpen, though. His teams have averaged 10 new players a year. Eight different starters have led his staffs in wins. Ten players have led his teams in homers. Nine have led his clubs in RBI.