We'd like to take this opportunity to extend a truly sincere gesture of thanks to Albert Belle, Will Clark, Orel Hershiser and the 11 other first-timers on the 2006 Hall of Fame ballot.

You guys probably never realized what a valuable service you were performing for some of us eternally perplexed voters by all retiring at the same time back in 2001. But it turned out you presented us with something we desperately needed:

A chance to re-examine our ballots, from top to bottom.

Most years, it doesn't work this way. Most years, The Usual Suspects on the ballot -- the men stuck there for the fifth or 10th or 14th time -- wind up fading into the small print, through no fault of their own.

Most years, the Jim Rices, Andre Dawsons and Bert Blylevens are just Those Other Names on the ballot, eclipsed by the marquee names of the first-time automatics -- the Ozzie Smiths and George Bretts and Paul Molitors who monopolize our attention.

But this wasn't most years. 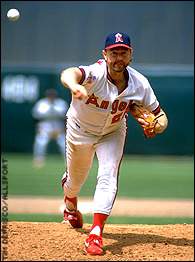 This was a year where Belle and Clark and Hershiser and Dwight Gooden, the best of the first-timers, were Not Quites -- great players in their time, just not great enough to stampede into Cooperstown.

So what they provided, for those of us who take every Hall of Fame ballot as seriously as our tax returns, was a rare opportunity -- to direct a fresh look in the direction of some of those tough-call candidates who have been making our heads hurt for years.

Because we don't get overwhelmed by new candidates in years like this, we have a chance to reconsider old ones. And in the case of this particular voter, that wound up leading me to cast a vote for a player I've resisted for eight agonizing years -- Blyleven.

I don't think that makes me a flip-flopper, or a guy just looking for someone to shove up onto the podium next July. It simply reinforced my conviction that my favorite part of being a Hall of Fame voter is that it teaches me so much about players I didn't cover or players I saw just a little in their primes.

And that often teaches me lessons about players I'm watching today, because the generations lend so much perspective to each other.

As someone who has literally bolted awake in the middle of the night -- wondering whether I was making the right call on Blyleven or Rice, or Lee Smith, or Alan Trammell -- years like this remind me that, in the end, the agonizing is well worth the brain cells it burns.

And in the case of a tricky call like Blyleven, I might have stir-fried about 96 trillion more of those cells than usual -- because the tug o' war inside my head never stopped from the moment his name showed up on the ballot.

You would think a man with 287 wins, and more strikeouts than all but four pitchers who ever lived, would be an easy guy to vote for. Uh, apparently not. Turns out it was almost as hard to vote for Bert Blyleven as it was to hit him.

In the past, there was stuff that always stopped me. Shouldn't this guy have made more than two All-Star teams in 23 seasons? (Heck, Joaquin Andujar made three.) Shouldn't he have finished in the top three in the Cy Young voting more than twice?

Why did a pitcher this dominating get traded so much (five times, if you're scoring at home)? Why, if he was so great, did he have a lower career winning percentage (.534) than Bob Welch or Mike Torrez?