In the 12 seasons Kirby Puckett brightened the big leagues with his magical presence, 96 different men made it to home plate wearing the uniform of the Minnesota Twins.

But 95 of those men merely played for the Twins.

Kirby Puckett was the Twins. 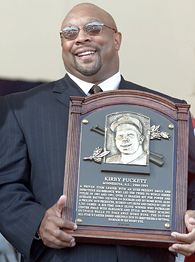 As we think back now on The Puck Years, we kind of remember Jack Morris as a Twin. And Kent Hrbek, Gary Gaetti, Frank Viola -- they were all in there somewhere, too.

But they were just best-supporting actor nominees to that 5-foot-8 leading pudgeball who made those Twins go. And made them laugh. And, most of all, made them win.

It was Kirby Puckett's world. Everyone else in town was just grateful he handed out plenty of tickets for the ride.

When you thought of the Twins of the late 1980s and early '90s, the same image seemed to be stuck in your head.

You thought of that little chubmeister center fielder of theirs, making all those plays he had no business making, cranking out 200-hit seasons as though he was Ty Cobb.

Let's just try to name all of the Twins in history who could have knocked on the door of any household in America and been recognized instantly. Maybe Harmon Killebrew. Possibly Rod Carew. Kirby Puckett? Absolutely. Heck, everybody knew Puck -- from South Dakota to the South Bronx.

He was built like a mini-nose guard, flying around the Metrodome on those chunky little legs, with shockingly thick biceps popping out of arms that didn't look much longer than a whisk broom.

But this was a man who transcended his height, his weight and his shape unlike just about any baseball player ever has. From the day he showed up in the big leagues (May 8, 1984) -- and went 4-for-5 off Jim Slaton and Luis Sanchez in a game in Anaheim -- it was obvious there was something special about him.

Because he was so good so fast, and because his career ended before anyone was ready for it to end, Kirby Puckett was one of the few professional athletes in the history of any sport who never had a bad year.

Which made perfect sense for a man who never had a bad day -- not when he could put that uniform on.

His numbers don't tell us nearly enough about the qualities that defined Puckett's greatness. But those numbers still led him straight to the Hall of Fame on the first ballot.

• There were those 2,040 hits in his first 10 years in the big leagues. How many other players since 1900 have cranked out that many? That would be none, of course.

• There was that .318 career batting average. Among men who went to the plate as many times as Puckett, that's the highest lifetime average by any right-handed hitter since Joe DiMaggio.

• There were those 2,304 career hits, more than any other player (in a pretty fair hitter's era) in the 12 seasons Puckett was around. Only Boggs and some guy named Tony Gwynn were within even 200 of him.

There's no telling, of course, where those numbers were headed if this man had just been able to see out of both eyes for the rest of his life. But Puckett would never want us to reflect on that, just as he never let us feel sorry that a disease as merciless as glaucoma had ever descended on him.

Then there were the awards, the honors, the accolades.

• He was an LCS MVP, an All-Star Game MVP and easily could have been a World Series MVP.

• And think about this: He finished in the top 10 in the MVP voting seven times in 12 seasons. In other words, he made the top 10 in more years than he didn't make it.

Yet Kirby Puckett's presence, impact and aura were larger than any number on any stat sheet, more imposing than any trophy on any shelf. The best thing you can say about him is that his sport was always a lot more fun when he was playing it.

How could you not laugh when you saw his fellow Twins kissing the top of Puckett's bowling ball of a head for good luck?

How could you not smile when you thought of the din inside the Metrodome, every time legendary announcer Bob Casey said the name of "Kiiiiiiir-beeee Puckett?"

What does it tell us about the powerful tug of Puck on every Minnesotan's heart that when the late, great Warren Zevon appeared in Minneapolis during the 1987 season, he rewrote the lyrics of a song called "Poor Poor Pitiful Me" to include the line, "Looks like Kirby Puckett?"

What does it tell us about Puckett's inimitable charisma that when he arrived for a luncheon appearance in Grand Forks, N.D., the winter after the '87 World Series, he discovered there was a minor riot breaking out -- because there were 1,000 more Puck Lovers waiting to see him than there were seats in the hall.

And then there was the time, in 1992, when Puckett won a game for the Twins just by being his usual gregarious Puckian self.

In the top of the 11th inning of a tie game with Toronto, he singled off Blue Jays closer Duane Ward. A moment later, Ward wheeled and fired a quick pickoff attempt that sailed right by startled first baseman John Olerud, kicking off a game-winning four-run inning.

So why, you ask, did Olerud not notice that pickoff throw flying in his direction? He was too busy talking to his good buddy, Kirby Puckett. Why else?

Then again, of course he was. There was no greater treat in the life of any player than to get to spend a moment, however brief, chatting it up with Puck. Because you always walked away with a grin the size of Lake Minnetonka.

So it's hard to compute that we now find ourselves reflecting on the end of Kirby Puckett's life.

His career ended way too abruptly. His final years were far too sad. But his death just feels wrong, and cruel -- no matter how many pounds he'd added, or how much his friends worried about him.

In baseball, there are never enough reasons to smile. And no player of his time ever made us smile more than Kirby Puckett. It's too late to engrave that on his Hall of Fame plaque. But it's never too late to be grateful he passed through our world.