HOUSTON -- Some day, once Barry Bonds' 714th and 715th homers are out of the way (assuming they ever are), no one will remember Russ Springer's role in this saga.

But on a crazy, history-free Tuesday evening in Houston, Springer vs. Bonds was your official DVR moment of the night. 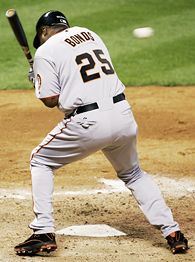 So without any homers to chronicle, the story of this night was that Russ Springer came in to pitch -- and pretty soon you had to check your scorecard to make sure that wasn't Jerry Springer.

It was the fifth inning of what would turn into a 14-3 Giants' wipeout of the Astros. It was already an 11-3 game by then. So about all the drama this game had going for it was that No. 25 kept showing up at home plate.

As Bonds dug in against Springer, he was 2 for his first 3 -- with two hard-hit singles and a towering, hold-your-breath-aw-never-mind fly-ball out to the front of the right-field warning track.

For some reason, as at-bat No. 4 loomed, the boos in Houston seemed to get a little louder and a little angrier. Maybe these people knew something the rest of the world didn't know.

Springer's first pitch was a slider that skipped two feet behind Bonds. Bonds tiptoed out of the way, then turned and politely scooped up the ball as it caromed back at him.

But as he tried to hand it to home-plate ump Joe West, he found West was kind of occupied, because he was busy issuing warnings -- to Springer, to manager Phil Garner, to everyone but the BALCO grand jury.

So naturally, Garner and Springer descended on West to debate those warnings. Bonds just leaned on his bat, taking it all in, an amused look on his face.

When the debate ended, Springer kept firing. Ball two was a slider that nearly drilled Bonds in the knees. Next came a fastball that Bonds had to squirm out of the way of, only to have it nick the knob of his bat for a foul ball.

The fourth pitch was a 93-mph fastball, also way inside. Then came the grand finale -- a 92-mph smokeball that nailed Bonds in the upper back.

Joe West lurched into his ejection dance. And off marched Springer, to a major standing ovation.

It was pretty clear how this looked. And it started looking even clearer once the Elias Sports Bureau had finished digging up the last three times these guys had faced each other:

• Tuesday: Springer meets Bonds for the first time since that 2004 HBP -- and makes it two in a row.

Obviously, accidents happen. But this looked about as accidental as a sunrise.

Springer, however, wasn't available afterward -- because, according to the Astros, he was driving back to Louisiana to be with his wife for a medical procedure.

Bonds, you'll be stunned to learn, wasn't available, either. 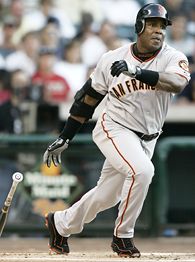 "What's that mean?" wondered one Astro. "We'll have to wait till 'Bonds on Bonds?' "

You got it, man. Consult your local listings.

So it was left to the nonparticipants to sum up this fascinating slice of non-history.

Well, yeah, as a matter of fact. He did really need to. So when asked what conclusions the planet should draw from those five pitches, Garner replied:

"Draw this conclusion: His first couple of at-bats, everything was away, and he raked the ball pretty good. So where do you want to go next time? Why not try the inside part of the plate? Doesn't that make sense? That's the conclusion you should draw."

OK, maybe. But clearly, it was not the conclusion the manager of Bonds' team drew.

Great idea. Unfortunately, all those people with honest hearts don't have their own reality show. So we were pretty much left to dissect the normal clubhouse spin.

Except for this noteworthy quote from Springer's bullpen amigo, Mike Gallo:

"If you go back years in baseball," Gallo said, "there have always been purpose pitches like that. If there was a reason for them, I'm sure that reason will come out."

"Everyone looks up to him," Gallo said. "He's got the longest time in the big leagues in our bullpen. He's been around a long time. He's seen a lot of things. So if he did do it on purpose, I'm sure he had a reason for it. And it won't be a bad reason."

But will those of us with honest hearts ever learn that reason? Well, maybe some day -- if we can just find the time and date of the next episode of "Springer on Springer."