Before Tuesday, Jason Grimsley's biggest claims to fame were: (A) he's the guy who once crawled through the drop ceiling at the new Comiskey Park (now called U.S. Cellular Field) to rescue Albert Belle's corked bat, and (B) he was once traded, even-up, for Curt Schilling, just before Schilling became Curt Schilling.

But from now on, Jason Grimsley is going to have a different claim to fame.

What Jose Canseco was to the steroid mess, Jason Grimsley now represents for the human growth hormone crisis, which is soon to erupt in a congressional caucus, or in a commissioner's office, or on a talk-show frequency near you.

Why is it such a monstrous deal -- for baseball and all the major pro sports -- that Grimsley allegedly was caught, red-handed, with HGH? Not to mention that he reportedly has since named a slew of names and told the feds all kinds of fascinating stories? Here are four big reasons:

1. The government is still targeting baseball
Months after the four BALCO defendants plea-bargained and served their time, the government's lead investigator in that case, Jeff Novitzky, is still on the baseball beat. 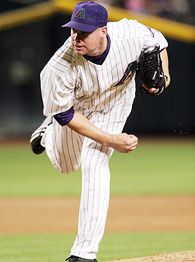 Which tells us BALCO was never just about Victor Conte or Greg Anderson. It was about the federal government's relentless fervor to clean up pro sports in general and baseball in particular.

Remember, it was the attorney general of the United States who personally announced the BALCO indictments. And the book "Game of Shadows" meticulously details the government's near-obsession with exposing the widespread use of performance-enhancing drugs by some of baseball's biggest names.

But when those BALCO defendants copped their pleas, it looked as if the heat was off. Uh, guess again.

First, it was Barry Bonds being aggressively targeted by the BALCO grand jury for a possible perjury indictment. Now comes more evidence that the same investigators who brought you the BALCO case are still roaring away, looking into other players and their use of a wide variety of substances.

If they could track a delivery of HGH to Jason Grimsley, then compel Grimsley to drop names, who else can they connect these dots to? What names are next on their shopping list? These are questions that are making a lot of people in baseball cringe today.

2. This is the smoking gun on high
For the first time since baseball instituted its new steroid policy, we have a major league player allegedly admitting -- to federal investigators, as noted in the affidavit -- that the loopholes in the new policy caused him to switch his substance of choice.

Why? Because baseball began testing for the stuff he used to take. It's that simple.

But baseball doesn't test for HGH, because (at least for now) there is no effective test that accurately detects HGH, and because the players' union has never been willing to allow any kind of blood testing -- the only kind of testing that eventually will work for HGH.

So this essentially announces -- to Congress, to Bud Selig, to the union, to all of us -- that players were well aware that they essentially had a free pass to use HGH. And we now know that at least one player took that free pass and never thought twice about it.

Not until the feds showed up at his front door, at least.

We should say here that no one thinks the use of HGH is anywhere near as rampant as steroid use once was in baseball. But on the other hand, nobody is naive enough to think Jason Grimsley is the only player who may have used it.

And if he has pointed investigators in the direction of other players, and to his distributor, this scandal is going to get worse. Much worse. Because you have to figure names much bigger than Jason Grimsley are going to be all over the headlines at some point.

This is also a clear signal to Congress that MLB -- and other sports -- aren't doing enough to attack the use of HGH, and that their current policies are essentially open invitations to use it at will.

We've already seen how much our friends in Congress enjoy pontificating on this issue. So we can expect them to pontificate some more any time now -- which could mean a whole new full-court press on baseball and other sports to address this problem. Or else.

If you remember what happened the last time Congress brought Bud Selig and Don Fehr to Capitol Hill for a clean-this-up-or-else session, you'll no doubt love the sequel.

3. Jason Grimsley is Forrest Gump
It isn't true that Grimsley has played with every single player in history. But for federal-investigative purposes, he's the next-best thing.

No, he hasn't been a teammate of everybody. But ...

He connects the late 1980s, when steroid use was just getting trendy, to the post-testing age we now live in.

He played with the Phillies of the early 1990s, with a bunch of players who went on to become a major part of the worst-to-first saga of their 1993 World Series runner-up team.

He played with the Indians of the mid-'90s, on a team of mashers that eventually grew into the only club in the past 70 years to score 1,000 runs in a season.

And he played with the Orioles of 2004-05, with guys named Rafael Palmeiro and Sammy Sosa.

Not to mention the '96 Angels or the 2006 Diamondbacks, or the three teams (Astros, Tigers and Brewers) that dumped him without bringing him back to the big leagues.

So Grimsley's All-Teammate Team would go on longer than his federal affidavit. It would be a roster hundreds of names long -- many of them really famous names, players who have never been associated with any kind of drug use.

In other words, if any player in baseball were to start naming names, Grimsley would be one guy who would scare the spikes off the many silent users who thought they would escape detection forever.

Well, we know now that he has named those names. Which makes him the worst nightmare ever for way too many of your baseball heroes, past and present.

4. He's a pitcher
It sure is funny how, when we hear the names of players in the news these days in connection with the use of performance-enhancing drugs, a shockingly high percentage of them don't specialize in hitting home runs for a living.

Yet the use of these substances by pitchers remains the most under-discussed aspect of the most over-discussed sports story of modern times.

So isn't it time we all woke up?

The everybody-used-steroids-to-cheat-and-hit-home-runs conspiracy theory has been oversimplified to the point of hysteria.

The lots-of-guys-used-steroids-to-heal-and-recover-and-possibly-throw-harder part of this story -- particularly by pitchers just like Grimsley -- has been just about ignored to the point of absurdity.

Jason Grimsley represents the most powerful evidence yet that way too many people have spent way too many hours and words focusing on the most convenient, but not the most prevalent, part of the story.

Well, hello. There's still time to catch on. And the Life and Times of Jason Grimsley is as good an excuse as any to get this right -- finally.