HOUSTON -- He huffed. He puffed. He staggered through an inning that seemed to last almost as long as Francisco Liriano's entire career.

But he was still Roger Clemens. And that was enough to fill every darned seat of Minute Maid Park. Which was the least a guy making almost $750,000 per trip to the mound could do.

So what will we remember -- say, in the year 2018 -- when we look back on Thursday, the night the Rocket staged the latest in his never-ending series of comebacks?

Heck, to be honest, we might not remember that Clemens pitched at all.

Just as we expected, you see, it could well have been the biggest game ever in the career of Thursday's starting pitcher.

Just as we didn't expect, however, the starting pitcher we're talking about wasn't the local living legend.

Turned out, this was Liriano's stage. He just needed the Rocket Man to make sure the spotlights were shining on it. 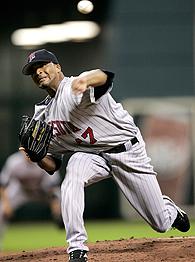 It might have been Clemens who popped the most flashbulbs, with a five-inning, two-run, work-in-progress-type performance in a game that ended Twins 4, Astros 2. But it was Liriano, baseball's official Next Huge Thing, who popped the nation's eyeballs.

He painted seven innings of unfair two-hit, zero-run, six-strikeout artistry, facing only one hitter over the minimum. Then he went and turned human on us in the eighth, tiring and allowing a two-run Jason Lane homer. Which hiked his ERA all the way up to 2.17.

So if the curious citizens of the U.S. of A. were wondering what all the Liriano buzz was about before, let's just say he solved that mystery Thursday. This will be known forever as the night Liriano inserted himself on the national radar screen.

"You're not going to get a bigger stage than that, without being in the playoffs," Twins catcher Mike Redmond said. "The whole country watching Roger Clemens' comeback -- and a 22-year-old kid went out there and outpitched him? I mean, that's impressive."

How impressive? Listen to this review -- from Clemens' catcher, Brad Ausmus.

"He might be as good of a lefty as I've ever faced," said Ausmus, a fellow who is 14 seasons and more than 5,000 at-bats deep into his career.

Uh, hold on a second. As good of a lefty as he ever has faced?

For the record, Ausmus has stepped to the plate more than 1,300 times against left-handed pitchers. So it's not as if he has hit only against Mike Bacsik and Eddie Oropesa. Now, think again about that sentence you just read -- that this guy might be as good as any of them.

"Well, I've faced Randy [Johnson]," Ausmus said. "I don't want to say yet that he's better than Randy Johnson because Randy has done so much. But his stuff is as good as any lefty I've ever seen."

Now remember, this pitcher we're talking about is younger than Jessica Alba. He owns a mere 333 fewer wins and just 4,399 fewer career strikeouts than the man he was pitching against Thursday. And he's a guy who was making his debut eating Gerber Squished Baby Food about the same time Clemens was making his debut in the big leagues back in 1984.

But there Liriano was Thursday, carving his own little niche in a sport that always has room for another star.

"Hey, that's why they pitched him tonight," Twins captain Torii Hunter said. "That's why they went ahead and let him have the challenge of pitching against Roger. They could have bumped him back a day and let Johan [Santana] pitch. But they didn't because they knew he could handle it."

OK, so they didn't exactly know. But they suspected, said GM Terry Ryan, because every time they've nudged Liriano up into a higher league or a more visible role, he has seemed to only get better.

"He might be as good of a lefty as I've ever faced."
-- Astros catcher Brad Ausmus

"You know, about a year ago, he was still pitching in Double-A," Ryan said. "And he wasn't really dominating that league. But when he got called up to pitch at the next level [in Triple-A], and when he got picked to be the starting pitcher in the Futures Game, that's when he started to take the next step."

Almost any situation is easier to handle, of course, when you can throw a baseball 96 miles an hour. And when you can mix that flameball up with a cliff-diving slider Boston's Mike Lowell recently described as "invisible." And when you also can toss in a changeup that seems to shift itself into reverse about 18 inches before home plate.

But when you can do that on a night when the largest crowd in Minute Maid Park history (43,769) has another plotline in mind -- that's what separates the future Cy Youngs from the pack. And if Liriano gave the appearance of not being particularly terrified to be in that spot, it's because he wasn't.

The awesome challenge of facing Roger Clemens? He "didn't think about it," he said.

The thunderclaps pulsating out of the seats? He "didn't pay any attention to the crowd," he said.

The nerves that had to raise a few sweat beads underneath his cap? "I don't really get nervous," Liriano said.

Then again, after watching him, you could see why. It's the hitters who ought to be nervous because it's a miracle they ever get a hit.

"The reason he's so good," Ausmus said, "is that his arm action on all his pitches is almost identical. There's not much difference in the rotation of the ball between any of his pitches. Which makes it very difficult to tell what pitch is coming at you."

Of course, if you've paid attention the past couple of years, you know the Astros have had a knack for making nearly every guy Clemens pitches against look like a cross between Francisco Liriano and Lefty Grove. So as great as Liriano might have been, this game looked way too familiar to this team.

Eleven times last year, the Astros forgot to score a run while Clemens was still in the game. So they're right back in the groove this year. You'd think they'd find better ways to remind the guy he isn't in Round Rock anymore.

"I've got a lot of work in front of me," Clemens said Thursday. "And if it entails throwing up zeroes, then that's what I have to do." 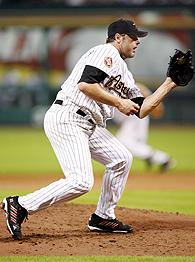 And he might. Clemens was no dominator Thursday. But to expect that would have been insane, anyway, after only three tune-up starts.

He ran seven 3-ball counts. He threw just 10 first-pitch strikes in 26 hitters. And it took him 61 pitches to get six outs in the second and third innings -- 38 of them in the third inning alone. Which is why he was up to 100 pitches -- and done -- by the fifth inning.

In one stretch, during those second and third innings, six Twins reached base 10 hitters. But Clemens was able to squirm out of both of those crises, allowing only two runs. And that was the one part of his night that felt like vintage Clemens.

"The one thing he does that's always been masterful is damage control," Craig Biggio said. "He just doesn't give in with men on base."

But that's not all he doesn't give in to. For 23 seasons now, he has been grumbling about hitters who get a little too comfy up there. And this just in: That hasn't changed.

"It's no different," he said afterward. "It's pitching. I've got to make some people uncomfortable. I've got kids half my age with their nose on the outside corner. That's how it is. Take a couple of Advil and go get 'em."

What he really needs to go get, though, is a grip on this team he's joining.

A year ago, the Astros had the best overall ERA in the league and the lowest starting-pitching ERA in the league. But that rotation, obviously, had Clemens from April to October. The rotation that inherits him this year, on the other hand, went into Thursday with an ERA more than a run higher than last year's -- and ranked No. 8 in the league.

So this team clearly needs the Rocket -- the 1.87 ERA version of the Rocket -- more this year than it did last year. And it sure wouldn't have made the World Series without him last year.

"The big picture is that every fifth day, you get a horse like that to turn to. ..." Biggio said. "The old saying goes, you're only as good as the next day's starter. And if he's your next day's starter, that's a pretty good problem to have."

At least, it is if he spends the next three and a half months pitching like the Clemens of the last two decades. But remember, in the past 75 years, the only non-knuckleballing starting pitchers Clemens' age who have had ERAs below 3.50 were Nolan Ryan and Satchel Paige. So brilliance at this age is no sure thing -- even if you're Roger Clemens.

"Obviously, we all know what Roger Clemens has done, and what he's done for baseball," Redmond said. "He's a great pitcher, and he's been a great pitcher for a long time.

"But it's always good to see the future, too."