It was a deal that would have wiped all the other deals off the back page, the front page and all the pages in between.

It was a deal that would have changed history -- and pennant races.

It was a deal that didn't happen this weekend, but apparently could have -- and should have.

It was a deal that never was -- a deal involving the only active 343-game winner currently hanging around our planet. 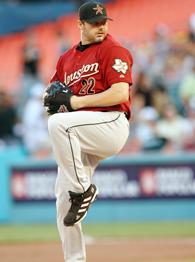 Roger Clemens to the Red Sox?

Multiple sources say it was a trade that could have been made, even as late as Monday afternoon. All Astros owner Drayton McLane would have had to do was say: "You know, it's the right thing to do."

The owner easily could have done for Clemens what the Cubs did Monday for Greg Maddux. There are times when certain people deserve to be rescued from their sinking cruise liners. This year, for those two living legends, was one of those times.

The Cubs couldn't be sure if this was Maddux's final season. But if it is, he doesn't deserve to finish it with a team that's trying to hold off the Pirates in the NL Central dungeon.

So on Monday, the Cubs gave Maddux a chance to write a different ending, to his season and his career, by pitching in games worthy of his presence. They didn't have to. But it was the right thing to do.

Accounts vary on exactly how close the Astros might have been to granting Clemens a similar favor. But we have heard too many accounts that suggest those dots could have been connected to ignore them.

The version that people in Houston are telling their friends is that they never actually fielded offers from anybody on Clemens. In this rendition of the story, GM Tim Purpura was sharp enough to see those offers coming. So he "prepared" for calls from the three teams that pursued Clemens as a free agent -- the Red Sox, Yankees and Rangers.

But he never planned to go beyond those preparations unless McLane told him to -- presumably because the season was a lost cause and it was the right thing to do. Except McLane never spoke those words. So teams that called were allegedly told it wasn't the Astros' "present intent" to trade the Rocket. He was out of play.

There is another story going around, however, that presents a different version of this tale. And it's fascinating how many hooked-in people in baseball were hearing it late Monday afternoon.

In this version, the Red Sox weren't told the Astros didn't intend to trade Clemens. Instead, the two sides exchanged ideas, scenarios and even lists of potential players who could have been sent to Houston in exchange for Clemens.

In this version, both sides were aware of how close Clemens came to signing with the Red Sox in May and how much he'd thought about finishing his career where it all began. So the two teams allowed themselves to go further down this road than they normally would have gone -- until the trading deadline was less than two hours away.

There was only one reason they went no further -- because McLane wouldn't let them.

Instead, it must have ended with McLane talking as optimistically as ever about how the Rocket and his friends were going to pull another miracle out of their sweat socks. Instead, the idea of trading Clemens clearly never entered the owner's brain.

Given Clemens' affection for his hometown, his teammates and even his owner, he would never broach that subject himself. He would never ask to bail out. It isn't what he's about.

He's the one who chose to play in Houston instead of for one of those other three teams, of course. He did that even though he knew their postseason prospects always looked brighter than the Astros'.

So you could easily argue he had his chance to play somewhere else, and now he should be obligated to honor his commitment to the team he picked. Go ahead. Argue it. We won't fight you.

But there is also an obligation on the other side, the obligation any team has to a player of Roger Clemens' stature.

Obviously, everybody in Houston has a vision of how the Rocket Man deserves to close out his astonishing career. And obviously, this isn't it.

And any time your team finds itself mixed up in a phrase like "worse record than the Royals," you know you're in trouble. Or you ought to know, anyway.

But the owner of the Astros clearly doesn't know. Doesn't see it. Doesn't want to see it.

So if there was really a deal there to be made with the Red Sox, that deal could have done more than just hand Clemens a better script. From all accounts, it could have helped the Astros, too, by saving them $7 million, and by infusing more real young talent in their system. Two players. Maybe three.

But the owner was terrified he'd be known forever as The Man Who Traded Roger Clemens. And Clemens would never want to be known as The Man Who Abandoned His Own Hometown.

So it would have had to be handled delicately. But it could have been done.

All Clemens had to say was that he wasn't "abandoning" his team. He was committed for life. He'd be gone for two months, and then he'd be back to work for the Astros for as long as they wanted him, doing whatever they needed done.

All (Astros owner Drayton) McLane had to say was that he did this because he loves Roger Clemens, and he cares about him, and he wants his career to end the way it deserves to end -- with another trip, or three, to the mound in baseball's grand Octoberfest. Then they'd all get back to the job of working together to make the Astros a better franchise. Could have been handled that way easily. But none of that ever played on the LCD screen inside the owner's head.

And all McLane had to say was that he did this because he loves Roger Clemens, and he cares about him, and he wants his career to end the way it deserves to end -- with another trip, or three, to the mound in baseball's grand Octoberfest. Then they'd all get back to the job of working together to make the Astros a better franchise.

Could have been handled that way easily. But none of that ever played on the LCD screen inside the owner's head.

So now Clemens and his Astros teammates will have to figure out a very different script than the one they've been living through these last six weeks. But is that even possible?

You have to admire the furious effort Purpura gave over the last several days, trying to add the likes of Miguel Tejada and Alfonso Soriano to a club that needs a serious jolt to save its season.

But the honest truth is, this Astros' season might not be save-able.

Yeah, things may have looked bad two years ago (when they were four games under .500 in August), and the Astros somehow recovered and made it to Game 7 of the NLCS). Yeah, it sure looked dire last year, too (when they were 16-31 in May), and they still survived to play in their first World Series. But not this bad.

This team, though, is a different story. This team has scored zero runs while Clemens was in the game in four of his eight starts -- and blown saves for him in two others. It is so obvious this team is missing something huge and vital that it advertised its flaws to the world this weekend -- by chasing names as powerful as Tejada and Soriano, by dangling players as high-profile as Roy Oswalt and Brad Lidge.

Optimism is a beautiful quality in this life. So you hope Drayton McLane's optimism is rewarded -- because if it isn't rewarded this time, the only 343-game winner of the division-play era might well finish his career in a half-empty ballpark in Pittsburgh in the last week of September, for a team with no more to play for than the home team.

That scene just won't feel right then. And the vision of it doesn't feel right now. But as it approaches, how will we forget that it didn't have to be that way?