We came across a National League general manager the other day who was perusing his handy-dandy roster of this winter's free-agent starting pitchers.

Let's just say it wasn't up there with "Harry Potter" on his list of uplifting summer reading.

"You look at this list," he said, "and you can get it confused with the six-year [minor league] free-agent list."

That, by the way, is not a compliment. 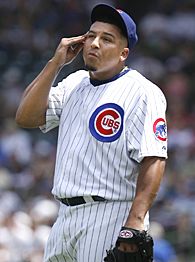 We live in an age when nobody -- not even that Little League World Series team from Lubbock, Texas -- has enough starting pitching. But shopping for it this offseason is going to be more challenging than shopping for a Fox Sports T-shirt at the ESPN Zone.

In fact, when we asked the same National League GM to name the one free-agent starter he would choose if he could sign only one name on the list, his reply said it all:

Looking for someone to blame for this dreaded dearth? Blame Carlos Zambrano. If he hadn't taken the Cubs' 91 million bucks last week, at least there would be one hot name out there.

"Yeah," said one assistant GM. "But even if he hadn't, the whole market was only going to be him, anyway."

Right. Him and Mark Buehrle. But Buehrle's name got scratched off the list, too, last month when the White Sox decided paying him $56 million through 2011 was a more attractive option than heading for the free-agent supermarket and trying to replace him.

So now, with those two gone -- and Freddy Garcia, Bartolo Colon, Kenny Rogers, Jon Lieber and Kris Benson hiding out in trainers' rooms from coast to coast -- the pitching-starved GMs of America find themselves debating pressing (or is that depressing?) questions like this:

Who will get more overpaid this winter -- Kyle Lohse or Carlos Silva?

So what we have here is the makings of big trouble.

"Think about last year, and the kind of contracts the Adam Eatons got," said an American League GM. "That just tells you that the free-agent market for starting pitching in general forces clubs to make decisions that are filled with risk.  So our goal from the start was not to be in this market. Our plan is to never be in this market."

Hey, great plan. Just not that easy to pull off. So for the clubs that have no choice but to shop in this market, here is our ranking of their top 10 starting-pitching options in the nuclear winter of 2007:

1. Curt Schilling
Yep, he'll be 41. Yep, he just finished a month-and-a-half stay on the disabled list. And yep, he's on pace to compile his lowest strikeout rate (6.3 per 9 IP) since he became a full-time starter 15 seasons ago. So you definitely wouldn't be buying vintage Curt Schilling.

But given his track record, his big-game state of mind and his evolution from power pitcher to painter, Schilling would still be "the best gamble out there by far," said one GM. Or, as one NL executive put it, "Schilling would probably be the most attractive guy for me because he'd probably do a one-year deal -- and there's no such thing as a bad one-year contract."

2. Carlos Silva
Silva was the hands-down winner of our Most Likely to Get Overpaid poll. Which is fascinating, considering he has never had a season in which he gave up fewer hits than innings pitched, and he'll probably be coming off back-to-back 15-loss seasons. But he's still only 28 years old and, most important, he is probably the most predictable commodity in the whole free-agent class.

"He'll get the biggest deal on the market, I'd guess," said one GM, "just because he's the most likely bet to give you what you think he'll give you, even though it's not spectacular." Or, as an official of another team put it, "Get him and his sinkerball to a team with a big grass field, and even if he pitches the same, I'd bet the results will be better than they've been in Minnesota."

3. Livan Hernandez
It's hard to explain what scares teams about Hernandez. He'll be coming off his eighth straight season of 200-plus innings and double figures in wins. And, in theory, he won't even turn 33 until next February. But let's just say there's some skepticism about Hernandez's actual age. And there's definite worry that the explosives laid by all those pitches and innings over all these years have to go off sometime.

"He's a safer bet on a short-term deal than almost anybody else [in this pitching class]," said one NL executive. "But all those innings just reinforce the feeling that you'd better be careful about giving him a long-term deal."

4. Kyle Lohse
In a perfect world, there wouldn't be a frantic market for a fellow who, barring a sizzling finish, is going to be the only starting pitcher in baseball coming off four straight losing seasons of double-digit losses. Let alone a pitcher with a 4.83 career ERA. But if you'd like to look up the Gil Meche contract now to understand the psychology of paying to dream about what Lohse might become, it might help.

"I guess you could bank on Lohse's upside," said one eminently disinterested GM. "But everyone has been doing that for the last five years."

5. Roger Clemens
We keep thinking the Rocket has to quit one of these years. But look at the names above him on this list and ask yourself why someone wouldn't want to employ him again next year, even though he'll turn 46 next August. The problem is this, though: Clemens might be running short on potential employers. If the Yankees decide it's time to insert Joba Chamberlain or the highly regarded Ian Kennedy into the rotation next spring alongside Phil Hughes, Chien-Ming Wang, Andy Pettitte and Mike Mussina, there wouldn't be room for Clemens.

The Red Sox could be in a similar situation when Clay Buchholz arrives. And the Rangers weren't even part of the Circle of Rocketry for this year's bidding. So it could be Houston or bust for Clemens next summer. But we're still talking about a pitcher with a lower ERA this year than Justin Verlander, Aaron Harang or Cole Hamels. So if he were a guy willing to pitch all season and open himself to all bidders, he'd actually be No. 1 on this list. Easily.

6. Jeff Weaver
If Scott Boras could convince a team (i.e., Seattle) to pay this man $8.325 million this year, after a season in which he went 8-14, with a 5.76 ERA, just imagine how much Weaver might be able to make after a year in which he projects to go 6-12, 5.57 -- but also lead the league in shutouts. Of course, the sales job will center around the way Weaver has pitched since coming off the disabled list in June (5-4, 3.30 in 13 starts) -- as opposed to how he pitched in his first six starts (0-6, 14.32). But whatever the details, there always seems to be some team in the Pacific time zone ready to believe. And Weaver is still only 31, remember.

7. Bartolo Colon
Since his 21-8 Cy Young season in 2005, Colon has made it to the mound only 26 times. And when he's gotten there, he's unfurled a regular Stephen King horror show (7-11, 6.08 ERA, while allowing nearly 12 hits and 15 baserunners per nine innings). But he's expected back next month from his latest visit to DL Land. So he'll have a chance to resurrect his value in September and October.

"If he gets on a major league mound in September, at least he'll be on the mound and not rehabbing," said one assistant GM. "So that puts him a leg ahead of the other injured guys." But one GM couldn't have sounded more terrified of seeing bears in his living room than he was of the idea of signing Colon at this point. "Maybe on a one-year deal with a low base," he said. "But I've [looked into] that elbow. And it's not good."

8. Jason Jennings
Here's a man who, six months ago, looked as if he had himself perfectly positioned to hit the free-agent Powerball this winter. He'd escaped Coors Field. He was a year away from free agency. His new team (the Astros) had given up three premium young players to get him. So all Jennings had to do was have an average season and  ka-ching. Whoops. His elbow started aching in April, and he was never the same, and finally headed off for elbow surgery this week, with a 6.73 ERA and two wins (2-10) in 18 starts. Which is no way to run a free-agent marketing campaign.

But that also sets him up to take a one-year deal and try to use next year as his mulligan -- and he's bound to attract interest on a contract that short. Nevertheless, said one GM, "Jason Jennings picked a bad year to get hurt."

9. Freddy Garcia
Everything we just said about Jennings pretty much applies to Garcia, too. Except that Garcia is (A) a pitcher with a better track record and (B) a pitcher who, unlike Jennings, hasn't made it onto a big league mound since June 8.

It still isn't certain whether Garcia needs shoulder surgery. But if he avoids it, he becomes a lightning-in-a-bottle alternative for some team hoping to get lucky with a one-year lottery ticket. "If the worst option is that he costs you a little money for one year, that's not such a bad option," said one NL executive.

10. Mark Prior
You won't find Prior on any current free-agent list. But it would be a shock if the Cubs didn't nontender him. And that makes him yet another intriguing dice roll in this free-agent craps game. Who knows what his stuff will look like after shoulder surgery. But at 27, he'll at least be a seductive name, if not a productive arm.

"I really don't know where he's at," said one assistant GM. "But given the amount of money he'd make if he was tendered, I'd say it's a safe bet he will be out there."

Other Options
There's Kenny Rogers. He turns 43 in November, and there are real questions about the state of his elbow. But if he makes it back and has any semblance of success in September and/or October, he'd skyrocket up this chart.

There's Randy Wolf. He was headed for an All-Star season in Los Angeles before his shoulder decided to start throbbing on him. But he sure can pitch when healthy.

There's Kris Benson, husband of Anna. The light bulb seemed to be going on for him before his shoulder blew out this spring. So somebody will take a flier.

There's that Kip Wells/Joel Pineiro tag team, currently tantalizing us again with a late burst of success in St. Louis.

There's Matt Clement, another shoulder surgery comeback kid whose stuff alone makes him worth a gamble.

There might even be Tom Glavine, if he declines his player option in New York and mulls whether he wants to (A) retire, (B) come back to the Mets or (C) make his grand finale in Atlanta. We would have placed him at the very top of this list if we knew he'd be available. But there's just enough uncertainty to make him a perfect symbol of this free-agent class.

All we know is that we don't know much. About anyone in this group. Except that the law of supply and demand will, as always, work heavily in the favor of their personal checking accounts.

Jayson Stark is a senior writer for ESPN.com. His new book, "The Stark Truth: The Most Overrated and Underrated Players in Baseball History," has been published by Triumph Books and is available in bookstores. Click here to order a copy.