It was only a matter of time before somebody got tossed overboard by the sinking ship the 2007 Houston Astros have become.

And that was so clear to one and all, you can bet your commemorative Jeff Bagwell T-shirt that Tim Purpura and Phil Garner sure hadn't made any nonrefundable deposits on their spring training condo rentals for 2008.

Nevertheless, what exactly was owner Drayton McLane trying to accomplish by canning both his manager and his GM on the same day with just a few weeks left in a lost season? 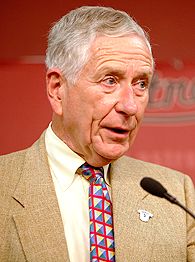 "To do the manager and general manager on the same day? I can't remember anything like it," said one NL executive Monday. "Not in this kind of setting, with this kind of timing."

Actually, Garner was part of another in-season manager/GM axing just five years ago in Detroit. (Randy Smith -- who, coincidentally enough, happens to be the son of the Astros' new interim GM, Tal Smith -- was the GM portion of that tandem.)

But that firing took place six games into the season, after the Tigers had installed Dave Dombrowski as club president, a position that outranked his GM on the flow chart. So it was already imminent, and the season still had 5½ months to play out.

This firing, on the other hand, went down 131 games into a season that can't possibly be salvaged. Not by Tal Smith and the new interim manager, Cecil Cooper. Not by John McGraw and Branch Rickey. Not by anyone or anything.

So what was the point of doing this now?

Obviously, McLane's always-turbulent emotions bubbled over this past weekend, when the Astros tumbled and stumbled past the Pirates into last place in the NL Central.

And obviously, these Astros need dramatic changes. They advertise that need with every addition they make to their ever-growing loss column.

But when McLane marched to the podium Monday and spoke of the need for better leadership and new ideas, he forgot to mention that he'd be well-served to take his own advice.

Why? Because he has done nothing lately to disprove the notion that he is as tough to work for as any owner in baseball.

Yes, he cares. And yes, he aims high. Yep, he's always around. And yep, he has spent lots and lots of dollars in the name of winning.

But his last GM, Gerry Hunsicker, up and quit three years ago because he'd had enough of McLane's meddling in the baseball side of the operation. And so little has changed since that day that it's difficult to evaluate Purpura's reign as GM, because we'll never know how many decisions were really made by the general manager.

We do know it was the owner's doing, not the GM's, that the Astros weren't allowed to sign their top two draft picks this year -- because it was the owner who was determined to please his good friend, Bud Selig, and not pay "above slot."

So if that's the philosophy, you lose the right to point fingers at the GM when the farm system starts to thin out. Don't you?

And when McLane talks, as recently as Monday afternoon, about the "great club" he thought the Astros had put together this year, did he have any memory whatsoever of the desperate pleas from his baseball people all winter to give them a few million more bucks to fill out the rotation, the bullpen and the bench?

We applaud McLane for allowing Purpura to sign Carlos Lee to a $100 million contract. But what was the good of that -- if the owner then handed the GM only another $10 million to plug every other hole on the roster?

Nevertheless, Purpura made a number of debatable player-evaluation decisions that led him right to the unemployment line. And he can't pin them on the owner.

Forcing Andy Pettitte out the door this winter doesn't appear to be all the GM's doing. But following that up with a trade of Jason Hirsh, Taylor Buchholz and Willy Taveras for Jason Jennings has turned out to be an official disaster.

Other GMs also second-guessed Purpura's work before the trading deadline. He had a potential stable of Brad Lidge, Chad Qualls, Dan Wheeler, Mark Loretta and Mike Lamb to deal. The only trade he eventually made was Wheeler for Ty Wigginton. And the jury is still deliberating on that one.

Purpura's major free-agent signings -- Lee and that Roger Clemens guy -- worked out great. But unlike Hunsicker, who did stellar work combing the bargain bins, Purpura mostly swung and missed on the likes of Preston Wilson, Woody Williams, John Franco, Rick White and The Artist Formerly Known as Richard Hidalgo.

So was there plenty of reason for McLane to fire Tim Purpura? Of course. But if the working conditions don't change for the next GM -- whether it's Randy Smith or David Forst or Walt Jocketty or even Bagwell himself -- we wish the new guy luck trying to fulfill McLane's mission of winning the World Series.

Garner, meanwhile, is a man who is eminently familiar with what it feels like to be fired. This was his third trip to that guillotine -- every one of them in midseason.

He was a genius in 2004, when he took over in July and rode a 36-10 finish to the brink of the World Series. He was a magician in 2005, when he turned around a 15-30 start and finally made it to the World Series, for the first time in the history of the Astros franchise.

Drayton [McLane] can point fingers at Phil [Garner] if he wants. But he was given that club, and that's just not a championship club. ... I don't know anybody but the owner who thought it was.

"Drayton can point fingers at Phil if he wants," said one baseball man Monday. "But he was given that club, and that's just not a championship club. That's the bottom line. I don't know anybody but the owner who thought it was."

It was that owner who was going to make Garner walk the plank in five weeks, anyway. So McLane decided Monday to let him take that stroll immediately.

"I wanted to get to know Cecil Cooper better," McLane said. "It's an opportunity for Cecil to show us his leadership."

But Cooper has long been viewed as the heir apparent. So unless he royally screws up what McLane called those "important 31 games left," it would be a surprise if he isn't invited back.

Cooper is a bright guy, with terrific people skills. But he also is a fellow who has managed just two minor league seasons (combined record: 130-156). So who knows if he's the next Bobby Cox or the next Lum Harris?

What we do know about the Astros is this: Drayton McLane created the monster that led two very capable baseball men -- not to mention two wonderful human beings -- to the gallows Monday. So if he sincerely wants to inject more "invigoration" and better leadership into this organization he cares so much about, then firing his manager and GM isn't the only change he should be prepared to make.

This time, he should try hiring good people and actually letting them do their jobs.

Jayson Stark is a senior writer for ESPN.com. His new book, "The Stark Truth: The Most Overrated and Underrated Players in Baseball History," has been published by Triumph Books and is available in bookstores. Click here to order a copy.