KYOTO, Japan -- A late-night stroll through Kyoto reveals white-faced geisha, the mysterious teahouses of Gion, the millennia-old Shinto shrines ... and a small red and blue sign for a bar named Fenway Park.

Wait a minute. Fenway Park? What the hell?

A shake of the head and a short ride in a cramped elevator later, you walk into a little piece of Beantown here in Japan's most traditional city. It's complete with Red Sox memorabilia on the wall and Sam Adams in a bottle. A Boston fan named Yasuyuki Ohta holds court behind the bar he owns with his brother.

"Yankees suck," Ohta says, some of the only English he knows.

The World Series might start in Detroit on Saturday night; but for Red Sox fans from Kenmore to Kyoto, it's already next year. The only World Series that will be playing at the Ohta brothers' bar this week is the one that was played in October two years ago. They've got a highlight tape, and that's what is thrown up on a wall by a projector. 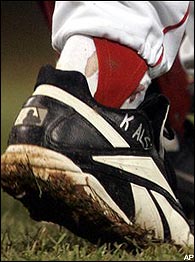 They're stuck in 2004 in this third-floor Kyoto pub. Curt Schilling always pitches through the pain and the Cardinals always lose in four straight. Last week, five New Englanders bellied up to the bar. They'd flown halfway around the world to experience a new culture, but a little taste of home is never a bad thing.

So the 2004 championship video played, and they cheered at the appropriate parts. Kevin Millar looked into the camera and said, "If they're watching in Japan, we'll show them, too."

Well, they were watching. A few locals and the New Englanders. One of them, Mary Anne Baker, read about this place in the Boston Globe, so she came bearing gifts: a copy of the article and a new Red Sox hat. Like everyone, she was curious about exactly how this bar came into existence, an incongruent oasis, more out of place than Toby Keith at a sushi counter.

It started, predictably, with a love of one team and a hatred of another.

In Japan, the Yomiuri Giants are like the Yankees and the Hanshin Tigers are like the Red Sox. The Tigers even come with a curse, and it's way wackier than anything having to do with the Bambino. In 1985, during a post-Japan-Series-win euphoria, fans made Tigers look-alikes jump into an Osaka canal . . . except no one could find a local who looked like star Randy Bass. So an enterprising Tigers backer grabbed a statue of Kentucky Fried Chicken's Col. Sanders. In he went.

No one ever found the Colonel, and the team is allegedly cursed until someone does.

Ohta has always loved the Hanshin Tigers. That means he had love for their brothers-in-curses in Boston. So, 15 months ago when he quit his job as an engineer and realized his dream of owning a bar, he didn't have to think hard for a name: Fenway Park.

It meant he got to show off his team pride. And he knew that every American who walked by and saw the small sign would have to go upstairs and see what in the name of Carl Yastrzemski is up with this place.

"A lot of tourists visit Kyoto," he says, "and Kyoto is Boston's sister city."

The bar is easy to miss; but once you find it, you don't have to move for a while. It stays open until 5 a.m. It's on Kawaramachi-Dori, a main drag near the river, right across from the Kyoto Royal Hotel & Spa.

That's where the New Englanders were staying. When they arrived in Kyoto, before checking out the Shogun's castle or the spectacle of a tea ceremony, they walked over for a few drinks and a few laughs. The locals certainly got a kick out of their cahs and pahks and bahs, and the tourists no doubt got a kick out of the profound weirdness of the whole scene.

Thousands and thousands of miles from New England, they raise their glasses. And you know what? They aren't really that far away from home at all. They're at Fenway Park.

"We made a toast, and we toasted to next year," says Pat Morrison. "Every Boston fan knows that."