When I was growing up in Washington, D.C. during the late '60s-early '70s, my folks would drive us through Baltimore on our way to New York City.

And I'd hold my nose.

I don't know if it was the factories or the smoke stacks or the Chesapeake Bay, but Baltimore literally smelled back then. And, based on what I'm hearing now, it still smells.

Any time now, Major League Baseball will announce the fate of the Montreal Expos, and more and more it looks like they'll be coming to my hometown ... unless Baltimore throws a hissy fit.

What a travesty. Their baseball owner, Peter Angelos, thinks the metropolitan area -- separated by a 40-mile stretch of highway -- can't support two teams.

But what he's actually saying is: Baltimore can't support one team.

Trust me, Baltimore is not a great sports town, never has been. And we're supposed to pay for that? D.C.'s been bailing out Baltimore for years, and it's time to stop, time for them to have a go of it on their own. Let us have our team, you can have yours, and we'll see you next June during Interleague.

Let me take you back to 1969. I'm 8 years old, the Orioles are about to play the Twins in the playoffs, and I ask my dad if we can get tickets to Game 1. No prob. He swoops in from his office on K Street, picks up a pair a couple days before the game, and we sit on the third base side. What, it wasn't sold out already? He didn't have to stand in line at Memorial Stadium for 24 hours? Of course not. This is Baltimore.

So, I get greedy and ask if we can get tickets to Game 1 of the World Series against the Mets. No prob. Don Buford leads off with an Oriole home run, Baltimore wins the opener and my dad predicts an Oriole sweep. Somebody sweeps all right (the Mets take the next four), but, I didn't mind, I was just glad to see a World Series game. It was easy. Dad didn't have pay scalper prices.

Let me tell you something, if my Senators had been in the World Series, there wouldn't have been any ducats to be had. We hosted the All-Star game that year, in '69, and my dad couldn't get a sniff of a ticket. Yeah, yeah, everyone says D.C. was a bad baseball town, that we lost two teams. But remember this: we were God awful. Not one year, not five years, but every year. First in war, first peace, last in the American League. And we're talking bad ownership. Clark Griffith had an All-Star in Harmon Killebrew and a young Tony Oliva in waiting, and, what's he do? He bails. By the time the guys are in the World Series, in '65, they're doing it in Minnesota. Bob Short, our next owner, thought Ted Williams would teach everyone how to hit .300, but that was a laugh. We had a fourth-place run in '69 (were still 23 games behind the Orioles), and Frank Howard's home runs were more gargantuan than Mark McGwire's, but that wasn't enough to save the franchise. There was no subway in D.C. yet, and the neighborhood around RFK Stadium had an image problem. So, Short high-tailed it to Texas after the '71 season. 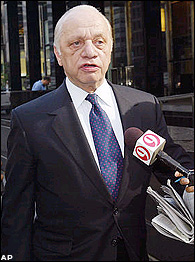 Did I root for the Orioles after the Senators left? Not in a million years. They used to kick our tails back then. Hated them, wasn't about to adopt them. They had Brooksie and Frank. Boog, Blair and Belanger. Four 20-game winners. They had all this talent, and couldn't get butts in the seats, and it was an absolute waste, a crime. We were dying for a Brooks Robinson. Or a close approximation. Auerilio Rodriguez and Mike Epstein had to do.

And then what happens? We bail Baltimore out. Once the Senators left, people in D.C. eventually started going to see the Orioles. Shame on those people. But, trust me, it wasn't the native Washingtonians who were going most of the time, it was the imports. It's a transient city, and all these transplants had no idea about the rivalry between the two cities, no idea that there used to be baseball in D.C., that the Orioles used to stomp all over us. And when Cal Ripken showed up, well, there actually was a reason to go. The Orioles became a regional team, at least perceptually. But the true D.C. natives knew better, knew we were the superior sports town.

Let's go back in time again, this time to 1977. The Colts are playing the Raiders, the defending champion Raiders, in an attractive playoff game, and Baltimore can't even sell it out in time to lift the TV blackout. We weren't even allowed to watch it in D.C. The Ghost to the Post? One of the greatest overtime games in history? Only saw the highlights, because Baltimore couldn't or wouldn't support its football team.

The Colts were smart; they snuck out of town. Just like the Bullets fled in '73.

So now here we are in 2004. It's been 30 years since a President threw out a first pitch at RFK, 30 years since we've had a real sniff of baseball … and Peter Angelos is whining, bellyaching. Doesn't he get it? We'll be in the National League, he'll be in the American. When they're home, we'll be on the road. When we're home, they'll be on the road. He'll give people in his own area a chance to drive over and see Bonds, Pujols and Gagne. A chance to see players they've never seen before. There'll be new young fans, more buzz about the game. The rivalry will be intense, the way the Cubs and White Sox are, the way the A's and Giants are. It might even convince Angelos to put a decent product on the field.

Listen, did Washington raise a stink when the Browns moved to Baltimore? Did the Redskins threaten to sue Art Modell? No and no.

You got to have your football team; so let us have our baseball team.

And we'll see you in June.

Tom Friend is a senior writer for ESPN The Magazine.