The long, twisting six-month marathon is about to become a six-week sprint for the finish line. Only two division races -- the AL East and the NL Central -- appear decided. The number of legitimate wild-card contenders has been reduced some, but not much.

Every one of those would-be playoff teams need big performances from key players down the stretch to realize their goal of the postseason. How well these key players perform between now and the first week of October could go a long way in determining who keeps playing into October and who goes home -- to say nothing of the MVP race in each league.

We've selected 10 players -- five from the AL, five from the NL -- who just might hold the key to the next month-and-a-half of baseball.

KEVIN BROWN, Yankees: The Yankees can hit all they want, and their lineup is relentless. But sooner or later, it will be their pitching which must carry them. No matter how good the Yankees' offense is, the game turns in the postseason. When the Yanks won four of six World Series from 1996-2000, they rode a deep staff that proved lethal in short series. In recent autumns -- particularly 2002 -- their starting pitching faltered. Brown, who's battled an assortment of injuries in recent months, is their best bet for an October ace. He's been there before, with the Marlins in 1997 and the Padres in 1998. Mike Mussina has been uneven in the postseason. Javier Vazquez will be a playoff newbie. Orlando Hernandez can't yet be counted on. For the Yankees to win, Brown will be the key on the mound.

ERIC CHAVEZ, Oakland: The A's may be the mirror image of the Yankees. Everyone knows that Oakland can pitch. Even with the inconsistency of former Cy Young Award-winner Barry Zito, the A's have been the top performing staff in the league. But the lineup is another story. The A's have suffered from free agent attrition in recent seasons, losing Jason Giambi, Johnny Damon and Miguel Tejada. Chavez is their lone legitimate big-time run producer. His return from the disabled list earlier this season helped spur the Oakland lineup. In a batting order that features castoffs (like Mark Kotsay), journeymen (like Erubiel Durazo) and rookies (like Bobby Crosby), the onus will fall on Chavez to get the A's into the playoffs -- and beyond.

FRANCISCO CORDERO, Texas: The Rangers have hung around the playoff race far longer than most expected, battling the A's and Angels in a three-way jostle for the AL West title, all the while positioning themselves for a wild-card run. The lineup produced runs, and startlingly, the starting rotation has been good enough. But as we get deeper into the schedule, and the withering heat in Texas wears down the pitching staff, it may be up to the bullpen to save the day. Cordero has already topped his career saves total in the first four or so months of this season. If the starters falter, it may be up to Cordero to save the Rangers' playoff hopes.

ORLANDO CABRERA, Boston: Only now, more than a week after The Trade, have things settled down with the Red Sox. When they opened a 10-game homestand Monday night, almost 20 percent of the roster was putting a home uniform on for the first time. Cabrera and fellow newcomer Doug Mientkiewicz have improved the infield defense immeasurably, as was anticipated. But four of the last five Sox defeats have been by a single run, underscoring the need for improved situational hitting. Cabrera had a brutal first four months at the plate in Montreal, which many attributed to the uncertainty and frustration of playing for baseball's wards of the state. But Cabrera needs to be more the hitter he was last year (.297-17-80) than he has been this year. With Nomar Garciaparra gone, the Sox need someone to hit fifth and provide protection for Manny Ramirez. Cabrera could be that guy.

BARTOLO COLON, Anaheim: Just as was the case when they won the World Series in 2002, a number of teams fear the Angels as much -- if not more than -- any team in the American League as potential October opponents. Their lineup is relentless, their baserunning aggressive and their bullpen deep. But the starting rotation is another matter. John Lackey, Aaron Sele and Kelvim Escobar scare no one, though they can all be serviceable. Colon is another story. He's turned himself around in the second half and reminded people -- at least occasionally -- of how good he can be. For the next six weeks, he's got to be consistent -- a failing over his career -- and give the Angels what they now lack: a dependable, front-of-the-rotation stopper.

National League
NOMAR GARCIAPARRA, Cubs: It may be asking too much for Garciaparra -- still reduced by his Achilles heel inflammation -- to carry the Cubs down the stretch. But let's face it: The Cubs got him to be a difference-maker. Until Garciaparra settled into the second spot in the lineup, the Cubs' batting order could be pitched around. Since Garciaparra's arrival, the lineup has been lengthened. Garciaparra had always been a clutch performer in his time with the Red Sox, until late last season when he disappeared in September. The Sox sprinted to the AL wild card last fall in spite of him, not because of him. He was also a non-factor once the playoffs began. If the Cubs are going to secure the NL wild card, Garciaparra needs to re-establish himself as a top performer. He doesn't have to do it himself -- Sammy Sosa, Moises Alou and Aramis Ramirez are there to help. But he needs to be a significant contributor to make this trade worth it for the Cubs. 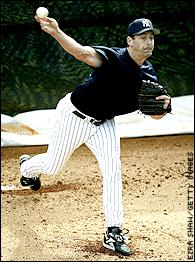 DUSTIN HERMANSON, Giants: The Giants have given up on Matt Herges as their closer after four months and now turn their lonely eyes -- and playoff hopes -- to Hermanson. The 10-year veteran has pitched short relief both in college and in the minor leagues, but before this season, he was just 5-for-14 in save opportunities in the big leagues. He helped close out a game for the Giants on Sunday, though, and will need to do that several times a week over the next six weeks for the Giants to make up ground on the front-running Dodgers and/or leapfrog the crowded wild-card race. Hermanson can be an intense sort, and that sort of competitiveness may help him in his new role. The Giants, with ground to make up, can use all the help they can get.

CHIPPER JONES, Braves: The Braves are threatening to pull away and win another -- yawn -- NL East crown, but the Marlins and Phillies aren't necessarily through, yet. Jones endured the worst half-season of his career up until July, but has shown in recent weeks that he's turning his year around. He hit .268 in July, but had a .388 OBP and a .536 slugging percentage. So far in August, he's been even better, hitting .448 with a .500 OBP while slugging .621 and knocking in nine runs over the last seven games.
Atlanta's playoff woes are well-documented and go far beyond any one individual. But to get there and accomplish something, Jones will be the key. Without Gary Sheffield and Javy Lopez to offer protection, it will be up to him to carry much of the offensive load.

PAUL LO DUCA, Marlins: Of all the players traded at the July 31 deadline, Lo Duca could have the biggest impact -- both on the team he left behind and the team he joined. The Dodgers are worried about the leadership void left by the catcher, while the Marlins hope he can give them what they've lacked since Ivan Rodriguez walked away as a free agent -- direction and production behind the plate. Florida's pitching staff has been horribly inconsistent despite its cast of talented arms. Lo Duca could be the one to get them straightened out, while adding to the lineup as a hitter.

JIM THOME, Phillies: Since signing as a free agent, Thome has been everything the Phils had hoped. But with time running short and Pat Burrell sidelined for the rest of the season, it's time for Thome to flex those Popeye-like forearms and slug his team into October. Cory Lidle gives them another veteran arm in the rotation and there are still issues in the bullpen, particularly the late innings given Billy Wagner's reduced effectiveness. But if Thome can get on one of his patented streaks at the plate and beat up on worn-down pitching staffs, the Phils might just be able to qualify for the postseason.