ST. LOUIS -- Luxury cars and delivery trucks speed by, some pulling in and out of columned mansions and sprawling ranch houses across the street. They don't stop, or even tap the brakes, at the Des Peres Presbyterian Church Cemetery.

The kids who play on the tire swing and the jungle gym not 70 paces away have grown from Tonka trucks to baseball cards. They haven't heard of his record, the one for most hits in a season. 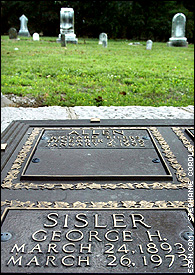 Eighty-four years ago, on his way to a .420 average, George Sisler was the biggest star in this baseball-mad town: Jim Edmonds and Albert Pujols rolled into one, and then some.

Sisler and Ruth and Cobb were once voted the three greatest players of all-time, and his grandson still has a picture resting on his bookshelf of those legends mugging for a camera in Cooperstown.

Now Sisler's a line in the stat books, revered by seamheads but mostly forgotten by the city he called home. Now Sisler's a statue, the fading image on a few worn photos, a plaque in a museum between Simmons and Slaughter, a small grave swallowed by big houses and fast lives.

The grounds around him hold the bones of the people who first came to this place, before St. Louis became known as the Gateway to the West. Though the signs of their achievement grow up all around them in the neighboring toney suburbs of Frontenac and Ladue, their legacies have been worn away by time. Only clues remain.

Did that mass of marble used to be praying hands? Was that once an angel? What kind of life did this man lead, the one with only a chiseled bible and anchor left to tell his story?

At the house closest to the cemetery, Melissa Stanza gets into her mini-van as painters apply a fresh coat to the façade of her home. She considers the question, then shakes her head.

"Who is George Sisler?" she asks.

Greatness forgotten
Each morning, Dave Sisler checks the Mariners' box score in his hometown St. Louis paper. He's hoping to find 0-for-4. Each morning, Ichiro Suzuki gets closer to 257 hits. He's just 24 away now, with 16 games to go.

"Every day," Dave says. "That's the first thing I do. See how many hits he got. I can't say that I'm pulling for him."

It's not that they don't respect Ichiro. They do. Dave, who along with his deceased brother Dick played Major League Baseball, understands better than most the difficulties of amassing so many hits. It's just that 257 is their father's final legacy, even if it isn't the most chic of records.

"That's a pretty big accomplishment and yet you don't really hear about it," Edmonds says. "That's the biggest problem. It's a shame his name isn't out there any more."

When the old St. Louis Browns folded in 1953, the Sisler legacy had begun to fade. By the time he was in his 70s, grandson Bo Drochelman would drive him to the park. Sisler would sit behind home plate, wearing his straw hat and a sport coat -- even in the swelter of summer. Rare was the occasion when someone would look at the old man scribbling in a notebook and realize he was one of the greats.

"I think the people in the know did," Drochelman says, "but the average fan didn't know who he was. I don't think that he is remembered as much as maybe we'd like him to be."

Sisler hit .400 twice, and even earned five victories as a pitcher -- two against Walter Johnson. He was an original five-tool player but was equally proud of his engineering degree from Michigan. In Sisler's obituary, the New York Times called him one of the two greatest defensive first baseman in baseball history.

The biggest stars of his era pined for a moment of his time. He was Jeter. In Sisler's obituary, a little known story was told. Seems the actor W.C. Fields invited the first baseman backstage at Boston's Majestic Theatre. The room was loaded with booze.

"You fascinate me, George," Fields said. "I've admired your artistry very much, many times. Have a drink with me."

"Well," he said, sadly, "even the perfect ballplayer can't have everything."

The perfect ballplayer certainly can't have forever. The old family home remains in the University City neighborhood, but a new family living inside.

"That house is still there," Drochelman says. "Nobody knows it was George Sisler's house, obviously."

There's a small statue outside Busch Stadium. In the Cardinals Hall of Fame, there's a glove of his, a double-knot still binding the leather all these years later. There's a postcard of his Cooperstown plaque -- he was in the first group to participate in an induction ceremony.

And there's his record, which isn't a relic like those others. It's a living thing, at least until it falls.

"This record was very special to him," Dave Sisler says. "He wouldn't be excited about it."

Rekindling a legacy
As traffic rushes by, a father and his two sons pull their bikes into the cemetery. David Kreutz and his children -- August, 8, and Eifel, 10 -- live nearby. They've never been to the Des Peres Presbyterian Church, but after a wrong turn on their daily ride, here they are.

As the family walks around, a stranger tells them this is the final resting place of George Sisler.

Well, he was just one of the greatest ballplayers ever. And his 84-year-old record might be about to fall.

When he finds out, he brings his kids over. He wants to tell them what he's learned.

A lesson begins, and moments like these are why the ballplayer's family wants the record to stand. For in every retelling, George Sisler finds new life.

Wright Thompson is a staff writer for The Kansas City Star and can be reached at wrightthompson@hotmail.com. To access The Star's online content, visit www.kansascity.com/sports.