In Anaheim, Azusa or whatever that city the Angels now claim to have rights to (oh, yes, it's Los Angeles), there is the chilling temptation to suggest that '05 could end up resembling '95. A 10-year anniversary would not be cause for celebration.

It was in 1995 that the Angels blew an 11-game American League West lead in a six-week span starting in August, going 8-26 during the heart of it and ultimately losing a one-game playoff to the Seattle Mariners for the division title.

Now, as they attempt to take fire hoses to the smoking Oakland A's during a three-game series starting tonight in McAfee Coliseum, the Angels are confident they can regain some lost momentum, skeptical about the A's ability to maintain their risen-from-the-ashes pace and dismissive of any comparison with '95. 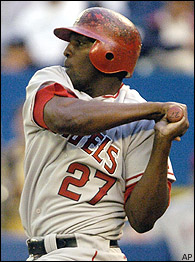 "I don't see it," said Joe Maddon, the only remaining coach from '95. "We basically self-destructed then. We lost [shortstop Gary DiSarcina] to an injury and got out of our game entirely. It was an awful time. We felt it sinking, and there was no way to recapture our momentum until the last series of the season.

"This time, it's different. Yes, we should have won more games than we have since the All-Star break, but we're playing at around .500, and that's not awful. I mean, we're not uptight, playing that poorly and looking over our shoulders. It's not that we're doing anything differently here in a negative way as much as what the A's are doing in a positive way. They're playing very, very well, and their pitching has become dominant. I just don't know if they can maintain that pace. It's very difficult, whereas I think we're going to regain our earlier consistency and momentum, and we've already started to do that."

Maddon referred to consecutive series victories over the Baltimore Orioles and Tampa Bay Devil Rays and an improved 12-11 record since the break.

In what was expected to be a back-to-basics rebuilding year after GM Billy Beane broke up his Big Three by trading Tim Hudson and Mark Mulder in the offseason and allowing power-hitting outfielder Jermaine Dye to leave as a free agent, the A's have confounded the Angels and prognosticators alike by winning 37 of their last 45 games to forge a 64-47 tie with their Southern California rival for the division lead.

"I don't know of anyone who didn't think it wouldn't be a two- or three-team race," Angels second baseman Adam Kennedy said, "so I'm more surprised we had that lead than I am by the position we're sitting in now.

"It doesn't matter how the A's start the season or who they have playing, we're used to them being there in August."

In an asked-and-answered analysis, lefty Jarrod Washburn, who is on the disabled list with an inflamed elbow, said:

"Is either of those situations going to last the rest of the season? I don't think so. I'm sure there's a medium in there somewhere. I'm sure we'll get on a good run, and they're bound to cool off.

"I'm not saying it's a given that we'll end up ahead, we definitely have our work cut out. They have a lot of great young players, and it looks like they've figured it out before a lot of people thought they would.

"I mean, it's never good to lose a lead like we have, but I don't think anybody's down or kicking themselves. We realize we're not playing up to our capabilities and have to do something about it. Panicking, worrying about the A's, isn't going to make us better. We have to take care of our own business."

The elusive element throughout the season -- and the word heard most frequently in the Angels' clubhouse -- is consistency. It has been missing at times in all the fundamental departments -- hitting, pitching and defense -- but most conspicuously and damagingly on offense. The Angels are tied for the division lead while ranking ninth in the AL in runs, 10th in home runs and 12th in on-base percentage.

"At this point of the season," said Kennedy, batting .323 in his usual No. 9 spot, "we can't really afford the type of offensive gaps that we've been having all year."

Beyond the run production of Vladimir Guerrero and Garret Anderson in the middle of the lineup -- and even those imperative cogs have been inconsistent at times -- there has been something of a futile search for a stepped-up performance by a fringe bat.

Three offseason moves have yet to pay off.

• In a largely financial decision, the Angels allowed Troy Glaus to leave as a free agent, plugging in touted Dallas McPherson at third base. Glaus has hit 23 home runs and driven in 67 runs for the Arizona Diamondbacks while McPherson has hit only eight home runs and driven in 26 runs while striking out 64 times in 205 at-bats. He has been on the disabled list since July 8 with a hip inflammation, with one result being that he and Darin Erstad -- who is valuable in other ways -- have combined for only 12 home runs at the corner infield positions.

• The two-year, $14 million investment in center fielder Steve Finley has been a bust. Finley is 40 and suddenly looks it. Although hampered by an earlier shoulder strain, he is batting .229 with eight home runs and 43 RBI. Although benched -- "my bat is in rehab," he said -- for the weekend series against Tampa Bay, he is expected to play tonight.

• The four-year, $32 million investment in shortstop Orlando Cabrera has been equally slow to produce dividends. Cabrera has picked it up some in the 12 games since moving to the No. 2 spot in the lineup, but his .253 average and .309 on-base percentage don't compare to the .272 and .352 of predecessor David Eckstein, who is doing it for the St. Louis Cardinals while earning $5 million less per year than Cabrera.

Compounding the offensive gaps at third base, center field and shortstop, the Angels have received only 10 home runs and 45 RBI from their primary designated hitters, Juan Rivera and Jeff DaVanon. General Manager Bill Stoneman maintained what has become a stand-pat policy at the trade deadline, but two home runs by first baseman of the future Casey Kotchman in Sunday's victory might thrust him into the left-handed half of the DH role.

"We've talked a lot about the inconsistency of the offense, and we're still struggling," manager Mike Scioscia said. "Whether it's Kotchman who can emerge as an everyday guy, or someone else, we're going to keep searching. We need someone to step up at one of those major positions. We're not deep enough to go without it otherwise."

Stretch help is on the way.

Washburn returns Saturday to a rotation that ranks with that of the Chicago White Sox as the league's best statistically, and Kelvim Escobar, limited to seven starts because of a bone spur that required June surgery, could be back in early September.

"Our pitching has been there pretty much all year," Kennedy said. "We don't need to support it with 10 runs. We just need to score five or six more consistently."

In the shadow of '95, the Angels now have to try to do that against the torrid A's.

Ross Newhan, who was inducted into the Baseball Hall of Fame in 2001, is a former longtime baseball writer for the Los Angeles Times.