The countdown to the non-waiver trading deadline is 14 days and already, there is the sense of resignation in the air.

For the second consecutive year, few expect many important deals to be struck. Talk? Yes, plenty. Proposals? Sure. But actual, honest-to-goodness deals? Doubtful. 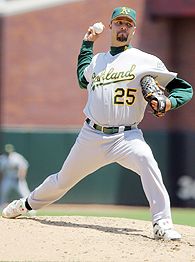 There are as many factors for this inactivity as there are rumors: too many teams in contention, too little of merit available, and so on.

But there's another variable driving the non-action. More than ever, the difference between the leagues is making trades difficult. In particular, American League teams are especially wary of dealing for National League pitchers.

Even the most casual baseball fan can recognize the ever-widening gap between the two leagues. The American League is enjoying a level of dominance that can't be argued. It can be seen in the AL's nine-year unbeaten streak in the All-Star Game, the lopsided interleague play record this year and the lopsided nature of the last two World Series, both of which have been won by the AL champs in four-game sweeps.

Now, the chasm between the two is starting to affect the trade deadline. AL general managers are cautioned: caveat emptor.

"Anyone watching the two leagues can notice the difference in the quality of the lineups," said an American League GM. "You have to be very careful."

National League lineups, as a general rule, aren't nearly as menacing as their AL counterparts. Among the top seven scoring teams in baseball, six are from the AL.

"NL lineups are a lot weaker, top to bottom," said one advance scout. "The bottom third of a lot of NL lineups are pretty easy to pitch to."

That's not the case in the AL, where there are fewer automatic outs, even at the bottom of the order.

Cases in point: recent free agent and trade busts such as Matt Clement, Carl Pavano, Randy Johnson, Esteban Loaiza and many other pitchers who have made difficult transitions from the NL to the AL. All have seen their ERAs rise significantly since coming to the AL over the last two years. Loaiza's struggles (3.77 ERA in 2005; 6.34 ERA this year) with the A's have been the most pronounced of the group.

"You always had to make allowances," said another general manager. "It used to be you'd factor in a half-run difference in a pitcher's ERA (going from one league to the other). Now, it's more like one and a half runs -- or close to it."

Consummating a deal presents enough challenges. Is the player's contract affordable? Is the asking price reasonable? How will a new player impact a clubhouse?

Now, add to this a more basic question: Can this guy get AL hitters out? More and more, AL executives are asking themselves that question and coming away with the same answer: not likely.

Of course, the same questions get asked when offseason deals are made. Boston packaged five prospects to land Josh Beckett last November, and while Beckett already has won 11 games and seems certain to establish a career high for victories, he's also given up 27 homers in less than four months. Pitching in the National League, he never yielded more than 16 in a season.

Deadline deals, meanwhile, have a greater sense of urgency because they can have an immediate impact on the pennant races.

"You figure that a pitcher isn't going to get more than 10 starts," said one AL talent evaluator. "So that makes every start big to begin with. And if you have one or two bad ones in there, everybody notices, because there's so much focus on each one."

With so much at stake, teams have to perform due diligence. Makeup is critical, but so is stuff and approach. GMs agree that power pitchers have a greater chance for success in the American League. The reasons are obvious: Power arms register strikeouts and have fewer balls put in play against them. The more balls put in play, the bigger potential there is for big innings.

The troubles experienced by Beckett, however, are a reminder that not even the hardest throwers aren immune to difficult adjustments.

"Touch-and-feel guys just have too much working against them," said another AL executive. "The second and third time around the order, hitters over here catch up to those kind of guys. What fringe guys win over here? To me, you go first and foremost with arm strength. The other guys just don't have much of a margin for error."

Beyond stuff and ability, pitchers jumping from the National League to the American League must have strong makeup to perform in the game's most pressure-packed situations.

"They can say what they want," said another general manager, "but there's no challenge like going into Yankee Stadium or Fenway Park and winning a big game down the stretch. There aren't a lot of guys capable of that. I've seen the best guys crumble [in those environments]."

Difficulties aside, some deals will be struck.

"Let's face it -- we're all relatively desperate," an AL GM says, chuckling. "That's why you see people like [Jason] Johnson and [Sidney] Ponson [being picked up by contenders]."

Agrees another general manager: "Teams always say they're going to go with what they have. But there's always that temptation to deal and hope you get lucky with a guy And National League teams will be in a good position. It's a seller's market [for pitching] -- if we don't take them, someone else will."