The Hall of Fame ballot arrived in the mail Saturday. It's one piece of mail I can't wait to receive each year.

I always take great care in opening the slightly oversized brownish-yellow envelope. I want it to look exactly the way it did before it was sealed a few days earlier. A tear -- any tear, even in the envelope -- would do the ballot a great injustice, at least in my mind.

I love the anticipation before I cast my eyes on each year's ballot, which I have been honored to receive and fill out for the last six years. And I hope that anticipation never dissipates.

The ballot doesn't come on some fancy, high-grade paper, the kind you might find accompanying a wedding invitation. This ballot is nothing more than a copy that could have been run off at a corner Kinko's. But to the voters, it might as well be written on a stone tablet. 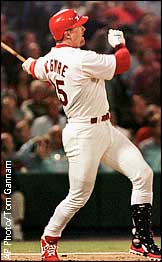 It represents at least 10 consecutive years as a member of the Baseball Writers Association of America (the criteria to become a voter for life). It is an example of countless nights away from home in places like Cleveland's old Municipal Stadium, where you could literally count (we did one night) the 1,927 fans in the park, or the Bronx at Yankee Stadium on a raucous Friday night.

Having this ballot also is a reminder of missed anniversaries, birthdays and, at least for me, the birth of my second child, who failed to realize that arriving one month early meant me scrambling from Boston to the San Francisco Bay Area only to miss his birth by 30 minutes. Believe me, I will always hear about that one.

Each year brings a new list of possible electees, some shoo-ins and others who make you scratch your head and wonder why they're even on the list (but play at least 10 years and you get at least one shot on the ballot).

Others, like Jose Canseco this year and Albert Belle last year, fall under the intriguing what-might-have-been category. The class of 2007 is no different.

Tony Gwynn and Cal Ripken are on the ballot for the first time. And so is Mark McGwire. Jose Canseco and the late Ken Caminiti, who along with Jeremy Giambi are the only players to openly admit steroid use, make their debut as the first juicers on the ballot.

McGwire is the elephant in the corner of the room. No doubt he is the poster boy for future hopefuls who fall under the dark, gray cloud of performance-enhancing suspicion. All 32 names on the ballot are listed alphabetically. McGwire's name is last in the second of three columns. He is sandwiched between Don Mattingly and Jack Morris.

There's a reason the Baseball Hall of Fame is widely considered the most important and the benchmark for all halls of fame. That reason is the sport itself. While football has risen to become America's most popular sport and basketball could arguably be No. 2, they still pale in comparison when it comes to being the most cherished, an honor that still belongs to baseball.

Think not? Then consider the outpouring of controversy and debate when the discussion turns to steroids. In football, a player being suspended for four games after being caught for the second time barely registers on the national radar.

The debate in baseball lasts for years. Rafael Palmeiro will forever be viewed as a scoundrel and cheat in many circles. He is the equivalent of a pariah because he tested positive for steroids, especially after he theatrically claimed in front of Congress while wagging his finger that he had never, ever used performance enhancers.

McGwire, who so famously captivated the nation in '98 when he passed Roger Maris to become the single-season home run champ, is now viewed by many as a liar at best and a cheat at worst.

He has had to live with whatever he did or didn't do in near isolation. On many occasions McGwire told me of his desire to be a hitting coach once his playing days ended. Instead, he's living in baseball's version of the witness protection program. No one sees him anymore. An avid and accomplished golfer, McGwire no longer even plays in celebrity pro-ams.

During this year's playoffs and World Series, when the Cardinals were tapping into their rich history for players to throw out ceremonial first pitches, there was no sign of McGwire.

A recent poll of voters strongly suggests McGwire will not come close to receiving the necessary 75 percent of votes to be inducted. For someone with 583 home runs, it would appear voters are showing their outrage toward someone who many believe violated the game's sacred trust between player and fan. If so, other players under suspicion had better get used to receiving the same treatment.

Gwynn, with his 3,141 career hits and eight batting titles, would appear to be a lock to become the game's 42nd first-ballot inductee. There is little disputing his claim to a place on the game's biggest and brightest marquee. The longtime San Diego Padres outfielder backed it up until his final day in uniform. He will be marked on my ballot.

Ripken, while undoubtedly equally deserving of induction, wasn't always viewed as a consummate team player, but he should join Gwynn as another first-ballot inductee.

In fact, I once wrote of Ripken, "  walk into the Orioles' clubhouse during the regular season and you find a fractured group of players, as divided as there is in the major leagues. The postseason has offered a glimpse of the same. By most accounts, Ripken is the primary cause of the split.  The belief is that Ripken is all about image: his own, of course."

Although I still believe what I wrote in that piece on Oct. 15, 1997, I am voting for Ripken. What he did on the field was at the highest level and it was pure. That's one of the many beauties of baseball -- you can actually believe your eyes.

If what you think you are seeing is unbelievable, then chances are it is. It's the reality of the steroids era and something all Hall voters will have to grapple with now and in the coming years.

What Ripken accomplished, I believe, was real. For his distinguished career he deserves entry into the game's most exclusive club. Undoubtedly, he and Gwynn will get the call.

I will also vote for the same four players who have received my check mark since they first appeared on a ballot: Andre Dawson, Goose Gossage, Dave Parker and Jim Rice. I'm also leaning toward adding Morris this year.

As for McGwire, he will not be marked on my ballot, and, it seems, I won't be alone.

And as Hall of Fame baseball writer Hal McCoy succinctly said recently about McGwire's infamous display last year in front of Congress, "He doesn't want to talk about the past? Then I don't want to consider his past."

Again, the basic beauty of baseball is that you can trust your eyes. For many of us, our eyes told us something was wrong with what McGwire was accomplishing late in his career.

Now I, along with 500-plus other voters, will have a say.

ESPN's Pedro Gomez has been voting for the Hall of Fame since 2001. He covered the Oakland A's home and away nearly every day from 1992-97 for the San Jose Mercury News and Sacramento Bee and then became the national baseball writer and later a general columnist at the Arizona Republic before becoming an ESPN bureau reporter in 2003.