Of course it helps to have the Yankees' revenues to take on Bobby Abreu's $15 million salary when the Phillies want him out of town and pay Andy Pettitte $16 million off a 14-13, 4.20 ERA season. 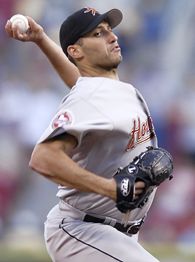 Though Yankee Stadium in the late 1980s was about the last place this side of a West Virginia coal mine that anyone wanted to play, what Gene Michael and Buck Showalter turned around and Brian Cashman and Joe Torre have cultivated is a place players want to go to and win.

Oh, winning is part of it, and so does never having to argue over 10 bucks. But Torre is a man players implicitly trust and respect, and when the Brothers Hendricks couldn't make a deal in Pettitte's hometown with Drayton McLane, it didn't take 72 hours for Pettitte to go home -- no longer than it did for Johnny Damon to make an emergency landing in New York last season.

Look at the Yankees' off-season. When they were bounced out of the playoffs by the Tigers and George Steinbrenner was so outraged that he was ready to fire Torre, he was returned to rational earth with this thought: "The Tigers thought they had to have home-field advantage and lost it by being swept by the Royals the final week of the season. Would you have fired Jim Leyland?" Two decades ago, Torre would have been gone.

Cashman, who with president Steve Swindal got the organization refocused on development (ask their scouting people what it's like in the new Cashman World), not only refused to trade off Philip Hughes and gave Melky Cabrera a chance, but has also moved Gary Sheffield and Jaret Wright for four young pitchers, two of whom, Humberto Sanchez and Kevin Whelan, could be major parts in the second half of the 2007 season. He also signed Kei Igawa for depth and inventory.

Pettitte may not be the dominant top-of-the-rotation guy he once was, but as he turns 35 in June he gives the Yankees a third proven starter with Chien-Ming Wang and Mike Mussina. Mussina was fourth in the AL in quality starts with 23; Wang sixth with 20; Pettitte had 20 in Houston -- albeit far from the AL East. Now there is less pressure on Randy Johnson to rush back and no pressure as they spend half the season figuring out who will be the 4-5 starters down the stretch between Carl Pavano, Igawa and Hughes. Now Scott Proctor can remain in the bullpen.

Then there's the whole Roger Clemens issue. If he decides to leave Houston, he doesn't need a video to sway him -- Torre is good enough.

Pettitte is a great signing on a one-year deal, even with the player option for 2008, and at the end of the season Johnson, Pavano, Jorge Posada and Abreu come off the books as Vernon Wells, Torii Hunter and Andruw Jones come onto the market. The next year, they can have Mark Teixeira at first base in their new stadium.

The Yankees have won the AL East nine straight years, and since Cashman gained control last fall, they are in better shape to make a run at the Braves' incredible record than they have been in a couple of (baseball) generations. I was there when Rick Rhoden DHed, remember the "Mr. May" line and the releases from "Ken Clay spit the bit" to the apology for losing the playoffs.

It's very different, now, and a lot more difficult for the Blue Jays, Red Sox and Orioles.

Red Sox get offensive
The team the Red Sox should put in the field in 2007 is a far cry from the one that was 11th in the league in runs after the All-Star break. If, as expected, Manny Ramirez returns, a lineup of Julio Lugo, either Kevin Youkilis or Coco Crisp, David Ortiz and Ramirez could make J.D. Drew a 125 RBI guy, particularly with his left-center field power in Fenway. More important, it will be a lot easier for Drew to adapt to Boston as a complement to than a replacement for Manny. 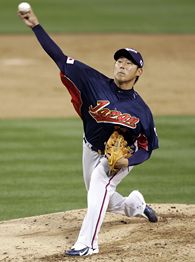 1. Matsuzaka. Scott Boras insists he does not have to bring the 26-year-old right-hander to Boston this week. Boras claims that he is "arguably one of the five best starting pitchers in the game and should be paid accordingly, especially coming off of this market." In Boras' mind, that fair market price is $20 million, not that he's asking for it because of the posting system. But Boras also claims that Matsuzaka can get $15-18 million pitching in Japan, that Seibu can get a lot more than $51.1 million next year and that Boston can write off most of the posting costs with marketing and the exclusion of the luxury tax. While Boras remains adamant in asking for close to a Jason Schmidt average annual value, Red Sox officials feel that the super agent prefers to keep Matsuzaka in Japan for two more years, then get $140 million for seven years after 2008.

Boston essentially needs to get the Matsuzaka agreement done by Tuesday night so they can get him in Wednesday for a physical prior to the Thursday deadline. One GM Friday said "it would be a shame for Matsuzaka and baseball to hold him out to try to force a change in the posting system." Boras has a very strong relationship with Theo Epstein, but he is willing to hold out players when necessary, such as Boston's current catcher and right fielder.

Will it get done? No one knows. But one can assume that the Red Sox are a far better team with Matsuzaka than without him, although he has never thrown a pitch in the AL East.

2. Closer. The Red Sox would not guarantee Eric Gagne 60 percent of his $10 million 2006 salary because of the fear that there's as much chance that he's Rob Dibble as he is Trevor Hoffman. Washington asked for Craig Hansen and Clay Buchholz for Chad Cordero, which isn't happening. Essentially, there's nothing on the market except for Tony Armas, which has been discussed, so if spring training were to open Monday, 28-year-old Devern Hansack, the Nicarauguan veteran who threw a five inning no-hitter the last day of the season, would be the first choice as closer.

The Red Sox believe that if and when Hansen remembers that his 95-98 mph four-seamer is a complementary, hittable pitch, goes back to his 92-95 mph sinker and regains consistency with his Brad Lidge slider, then he can eventually close. So can Bryce Cox, their third-round pick out of Rice who blew through the system.

But they need a veteran or two to get them to midseason, and thus far have had no luck trying to acquire Derrick Turnbow, Cordero, Jesse Crain, Chad Qualls, Cameron Loe, et al.

Notes
• One club executive, marveling at Boras' work, said, "He's got 85 people working for him. That's more than most organizations."

• Washington is going to build slowly, with a $40 million payroll in 2007 as they try to rebuild their farm system.

• The deal that got the most attention within the industry was Atlanta's acquisition of Rafael Soriano from Seattle for Horacio Ramirez. "That was a great John Schuerholz deal," said one general manager. "Unbelievable."

• The Brewers will continue to market Geoff Jenkins and Kevin Mench.

• Lou Piniella on choosing the Cubs and not going back to the Yankees: "First of all, Joe [Torre] should be the manager of the Yankees. But if I were to go back and we won, it would have been what we were supposed to do. If we win with the Cubs, it will be one of the great moments of all time."

• The Marlins would like to snag David Murphy from Boston to play center field, but the teams have not yet agreed on the pitcher in return.

• Last spring, Ken Williams said he traded "two SportsCenter guys -- Gio Gonzalez and Chris Young, guys I'll see on SportsCenter and wish I had back in Chicago." Oh well, he got Gonzalez back, but the D-Backs love Young as a special everyday center fielder.