At first glance, the pending sale of the Atlanta Braves is a deal only a tax attorney could love. Liberty Media gets the Braves, $1 billion in cash and -- who knows? -- maybe a junk bond to be named later. In return, Time Warner gets back a chunk of its stock held by Liberty Media. The beauty of this complex asset swap: tax free!

Turns out, though, the deal even bums out tax attorneys -- at least those who also happen to be Braves fans.

"I do admire the elegance of the structure," says Lynn Fowler, a tax partner at the Kilpatrick Stockton firm in Atlanta. "But the Braves fan in me longs for the day when Ted Turner was the owner." 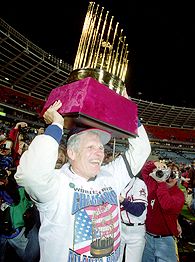 A Braves season-ticket holder for 17 years, Fowler is no more naive about the baseball business than he is the U.S. tax code. He knows the Braves have operated under corporate ownership for 30 of their 40 years in Atlanta. Turner Broadcasting was the team's parent from 1976 to 1996. Since then, the Braves have been owned by Time Warner, which acquired Turner Broadcasting just over 10 years ago.

For three decades, the team has been, at its base, television programming. Atlanta Braves broadcasts almost single-handedly vaulted Turner's superstation from the backwater of Andy Griffith reruns into a cable TV powerhouse.

But the CEO of Turner Broadcasting wasn't just another suit. Ted Turner was a zany local and a frequent presence at the ballpark. He bloodied his face rolling a ball around the base paths with his nose during a promotional stunt. He frequently enraged the baseball establishment, whether by managing the Braves for a game or jumping the gun in trying to sign free agents. To fans, he was "Their Guy."

When Turner ceased showing his passion through splashy, stupid moves (hello, Andy Messersmith) and channeled it into smart ones (hello, John Schuerholz), he gave birth to a Braves new world -- a long, glorious run. The fact that Atlanta won 10 of its 14 consecutive division titles after he'd sold Turner Broadcasting to Time Warner is testimony to the durable wonders he set in motion, not to the virtues of corporate ownership.

Indeed, it must be asked ... what virtues? There should be a special circle in hell reserved for corporations that have owned major league teams and put their fans through major heartache. Just to call forth a partial role of the damned: News Corp. and the Dodgers, Cablevision and the Knicks/Rangers, CBS and the Yankees. If only these were the exceptions rather than exemplars of a general rule. When it comes to big league ownership, big business generally strikes out.

There is the occasional useful corporate guardian, of course. Anheuser-Busch had a long and mostly good run with the Cardinals. Tribune Co. has invested heavily, if not particularly successfully, in the Cubs.

But in general, the sports business is a poor fit with a corporate bureaucracy. Teams that are buried in vast conglomerates aren't geared up to move fast when trading or signing opportunities arise. They're not usually run by the corporation's "A" level executives. They don't produce the profits that Wall Street demands, so they wind up starved for resources. Time Warner cut back the Braves' payroll from $100 million-plus to $80 million, even as player salaries were exploding.

At their best, sports teams are fueled by their owners' passions, not by bloodless corporate suits. They are civic institutions, not asset plays. Their fans want an accountable community figure out front, not a ticker symbol. Except for a handful of minor single-season upturns, the Braves' home attendance (based on tickets sold) has declined each year since 1997, no doubt partly because fans had grown inured to the team's mixed bag of regular-season success and October disappointment. But I'm convinced it was also because fans felt removed from the whole enterprise. There was no Turner at Turner Field.

Bad enough having your team controlled by a bunch of New York suits who call it a "non-core asset." But imagine it in the hands of a Colorado media empire that likely will hold the franchise only long enough (two or three years) to ensure the acquisition qualifies as a tax-free transaction. That arrangement might satisfy the IRS; it'll never satisfy Braves fans. They're already witnessing a franchise in decline -- its first losing season since 1990 last year, and a series of dollar-driven, talent-draining moves such as the departure of productive infielder Marcus Giles. Heading into spring training, Atlanta essentially has a void at second base for lack of the $5 million extra Giles would probably have cost.

Does anybody really think Liberty CEO John Malone will invest in this team? The man long known as the "king of cable" lives for dazzlingly complex transactions such as the "cash-rich split off" that just brought him the Braves. His fascination with numbers quite likely doesn't extend to earned run averages. As lawyer-fan Fowler puts it, "He's a fan of business, not baseball."

On the other hand, does anyone really think the lords of baseball will reject Malone as an owner? By setting the Braves' sale price at $450 million, Liberty Media serves their purposes splendidly. That robust figure helps buoy the value of every other MLB franchise.

The Braves' pitchers and catchers report to spring training this week. The Braves' fans have little reason to report for Opening Day in April. The new owners are trying to appease them with assurances of continuity: Bobby Cox is still the manager, John Schuerholz is still the GM, Terry McGuirk is still the president. But Braves fans aren't excited, and they aren't dumb. They've long recognized the perils of corporate ownership, and now they see them in Jumbotron proportions.

Their team might as well be renamed the Atlanta Loopholes.

John Helyar is a senior writer for ESPN.com and ESPN The Magazine. He previously covered the business of sports for The Wall Street Journal and Fortune magazine and is the author of "Lords of the Realm: The Real History of Baseball."