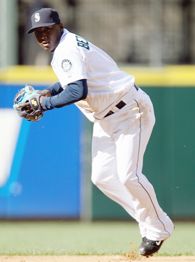 Today, Betancourt, 25, has a bright future as the Mariners' shortstop. Seattle recently secured him through 2011 with a three-year, $13.75 million extension. After he originally signed for three seasons at $450,000 a year in December 2004, Betancourt's life has changed dramatically. "Future" is another new word on his agenda.

"Among the drastic changes I have lived during the past three years, considering the future was the most important one," said Betancourt to ESPNdeportes.com. "In Cuba, you live day to day. It's all about surviving the moment, and there's no time to think about tomorrow, much less about the mid- to long-term future.

"Now, I have the chance to dream, plan and think about the future," he added. "And my dream is to be like Derek Jeter and Jose Reyes. They are the best shortstops in the big leagues."

Although defense is his greatest asset, during his first full season in the majors, Betancourt proved he can also produce on the offensive side.

This season, after a slow April start, when he went .239, Betancourt has played consistently in May and pushed his average up to .271.

"I have to keep learning how to hit to the right side and use the whole field," he said. "When I master that, I'll be a more productive batter."

In 258 career games, Betancourt has shown a little pop. He has hit 13 home runs and 48 doubles.

"I spent the winter working out in order to build muscle and increase my power," he said. "I can also run, though I'm not a great base stealer."

Betancourt is hungry to get better.

"Yuni has room to keep improving offensively and become a great batter," said Mariners teammate Jose Guillen. "With his level of defense, if he can bat .280, he'll be one of the great shortstops in baseball."

My dream is to be like Derek Jeter and Jose Reyes. They are the best shortstops in the big leagues.

Seattle third baseman Adrian Beltre sees promise, too: "He doesn't appear to be a man who made his professional debut just a while ago."

Even though Betancourt's arrival to the United States in 2003 became part of an investigation into Cuban agent Gus Dominguez, who was found guilty of illegal immigrant smuggling last April, the Mariners' shortstop has decided to focus on the future and not talk about the past.

"I escaped from Cuba in a raft in order to fulfill my dream of playing in the big leagues, and that's in the past," said Betancourt. "About the smuggling, I had nothing to do with that, and even though I was summoned, I didn't even have to testify.

"I have a future now, and I will try to make it as brilliant as possible," he added. "Thanks to baseball and the Mariners, I'm able to dream again, and I dream of becoming one of the greats of this great game."

Enrique Rojas is a reporter and columnist for ESPNdeportes.com and ESPN.com.