CHICAGO -- Complex might work for Barry Zito. But the essence of Mark Buehrle is the ability to keep things simple.

Strike one. Hometown sweethearts. Working fast. Hunting. Fielding your position. Grilling burgers. Being respected by teammates. Knowing the names of everyone at the ballpark.

Buehrle is 28 years old, the same age as Zito was when he landed that seven-year, $126-million contract with San Francisco last winter. Buehrle has 102 career wins, identical to Zito's total when he went on the market. 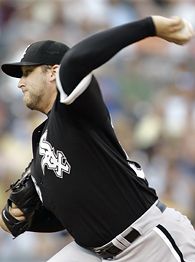 Yet rather than try to make the comparison over a winter in which he would be the most highly pursued free agent, possibly winding up with his own nine-figure contract, Buehrle asked his agent, Jeff Berry, to find out how far the White Sox would go to keep him after this season.

"I think everyone knows where my heart's at," Buehrle said after his last start, a 5-3 victory at Tampa Bay on Wednesday. "[They know] where I want to stay and how badly I want to stay here."

Buehrle's start at Tropicana Field was covered by scouts from at least a dozen organizations, including the Mets, Braves, Brewers, Red Sox and Yankees, all of whom have spoken to White Sox general manager Ken Williams about possible trades.

Until last week, it did not appear Buehrle was going to get a chance to stay with the White Sox. The sides started talking in a last-ditch attempt to get a deal before a trade, in part because Buehrle realized he did not want to go anywhere.

Jamie Buehrle, Mark's wife of two years, is eight months pregnant. The couple is content in Chicago, a five-hour drive from their families and friends in St. Charles, Mo., outside St. Louis.

"The only thing Buehrle has to listen to is his family, what they need and what they want," said Ozzie Guillen, one of only two managers Buehrle has played for in his eight-year career. "The family will be there forever, and I don't think Buehrle will spend all that money."

White Sox chairman Jerry Reinsdorf does not believe in signing pitchers to contracts longer than three years, which has put the franchise at a crossroads with its ace, who is in the midst of a characteristically solid season (5-4 with a 3.33 ERA over 15 starts, including a no-hitter).

According to sources, the club is willing to make an exception to its policies for Buehrle, reportedly offering him a four-year, $56 million deal. The sides appeared close to an agreement late last week, but Buehrle's insistence on a full no-trade clause -- something Paul Konerko didn't get in his five-year deal -- could still lead to his being traded, possibly sooner rather than later.

Buehrle never expected to be in this situation. He was twice cut from the team at Francis Howell North High School in St. Charles; with his lack of size and zip on his fastball, the freshman and junior varsity coaches undervalued his feel for pitching.

Bob Dunahue, the varsity coach at Howell North, says he always knew that Buehrle was a quality pitcher, because of his unusual command, but that other coaches couldn't see past the radar gun. For two years, while lesser pitchers worked for the school team, Buehrle was forced to focus on summer baseball. It would have been easy to walk away from the sport, but Buehrle kept trying to get on the team.

"To Mark's credit, four days before tryouts for his junior year, I saw him in the hall and told him to make sure he came out, and he just said, 'Coach, I'm there,'" Dunahue said. "I said, 'That's good because I just want you know shame on me for what has happened in the past.' He just kind of smiled. God, I love him. He's really special."

Buehrle said he might have given up on baseball if his father hadn't forced him to keep pushing.

"He was disappointed and embarrassed," John Buehrle said. "Not making the team hurt, but I told him, 'Buddy, that's life. Life is often disappointment and hurt, but if you take that disappointment and turn it around into something positive, you can learn from it. Your mother and I didn't raise any quitters, and we're not starting now.'"

Buehrle wasn't drafted out of high school but was spotted by White Sox scouts Nathan Durst and John Kazanas while pitching for Jefferson (Mo.) Junior College as a freshman. He's had the career of someone selected with the 38th overall pick in the draft, but it was the 38th round when the Sox claimed him in the 1998 draft. He was what scouts call a "draft-and-follow," a practice that was eliminated in the 2006 labor deal, and signed with the Sox in May of 1999, after returning to Jefferson for his sophomore season.

Buehrle, thrilled to have a spot on a pro roster, hit the ground running in the White Sox system. He helped Burlington reach the Midwest League playoffs in 1999, and showed such poise there that Ron Schueler, then the Sox general manager, decided to bring Buehrle to the big league camp the next spring, Buehrle's first as a pro.

That would prove to be a very good decision, as it set the stage for Buehrle to shortcut the usual developmental path. Buehrle acted as if he'd been a big leaguer forever that first spring, not letting anything, including big league hitters, bother him. He pitched the same way he had at Jefferson Junior College -- pounding the strike zone with 91-mph fastballs and 80-mph changeups, working fast and fielding his position.

He would start the 2000 season with Double-A Birmingham. In 16 starts there, he picked off 20 runners and allowed one stolen base against him (to Carl Crawford) before being promoted to Chicago. The White Sox, who were on their way to 95 wins and a Central Division title that season, needed another lefty in Jerry Manuel's bullpen and weren't afraid to go with a kid only one year out of junior college.

On Sept. 8 at Jacobs Field, Buehrle was called into a game by Manuel with the Sox clinging to a one-run lead. The Indians had scored once in the inning on singles from Kenny Lofton, Omar Vizquel and Manny Ramirez, and now had runners on first and third and one out for Jim Thome.

The powerful first baseman was noted for his eye at the plate. He struck out a lot, but he also walked a lot, seldom putting the first pitches he saw into play. This at-bat was no different. He worked Buehrle to a 3-2 count, then hit a grounder to second baseman Ray Durham, who started an inning-ending double play.

Buehrle would be the winning pitcher as the Sox pulled 8½ games ahead of Cleveland, a last gasp for a proud team that had won five straight division titles, twice advancing to the World Series. Afterward, after the group interview, Buehrle was asked one more question: "The 3-2 pitch to Thome, was that a changeup?" asked a lingering reporter.

Buehrle, who had been stoic, cracked a little smile. "No," he said. "That might have been the first one I've ever thrown."

Buehrle was given a linebacker's number from equipment man Vince Fresso when he got to the big leagues. Instead of complaining, he stuck with it, turning No. 56 into a fashionable one around Chicago. He's never been the type to sweat the small stuff.

"Buehrle's my man," Sox pitching coach Don Cooper said. "[One day in spring training] when he pitched, the mounds were wet, and there weren't any groundskeepers around. We called but couldn't get anybody to come work on 'em. Mark just said, 'That's OK,' and went out into the outfield to warm up. The catcher crouched and everything, right there in left field. Then Buehrle pitched six perfect innings. He even asked me if he could work in the stretch one inning because he needed the practice. Some pitchers, most pitchers, they'd be toast if they had trouble with the bullpen mound. This kid is really special."

Because of the easy commute, Buehrle's family spends a lot of time around U.S. Cellular Field. His one major purchase has been an 1,100-acre tract of land near St. Charles that he uses for hunting and riding four-wheelers.

It was there, while atop a deer stand, that Jamie accepted his proposal of marriage.

"A lot of people said, 'Man, you're a redneck for proposing in a tree stand,'" Buehrle said in a 2005 interview with the Chicago Tribune's Melissa Isaacson. "I was like, 'I like to be out in the country, I like to hunt.' If people want to say I'm a redneck, whatever, I don't care. That's my nature."

Buehrle has frequently accepted invitations to attend the annual offseason baseball dinner in St. Louis, where he draws cheers when he says he loves the Cardinals and would like to pitch for them before his career is over. He was wearing a backward St. Louis cap when he was photographed attending the 2006 World Series, helping fuel speculation he would sign with the Cardinals if the White Sox let him reach free agency, but Buehrle denies that is his priority.

"If anyone has a question thinking I'm going to St. Louis after this season when I'm a free agent, if it gets to that point, they're wrong," Buehrle said last week. "I want to stay here and do everything I can to stay here."

If Buehrle said it, you can believe it. His word has been even better than his pitching since he hit town throwing 3-2 changeups for strikes.