BOSTON -- Jason Varitek was one of the first Red Sox players to spot Jon Lester in the home clubhouse Sunday afternoon, moments after the Red Sox had held off the Chicago White Sox, 8-5.

"He had the biggest smile on his face," said the catcher, smiling himself at the thought of the encounter.

Varitek -- and the rest of the Red Sox -- knew how far Lester had come, and it had nothing to do with the 50-mile drive Sunday afternoon from the Red Sox's Triple-A affiliate in Pawtucket, R.I., to Fenway Park, after getting word that he was being promoted to Boston for a start Monday night in Cleveland (ESPN2, 7:05 p.m. ET). 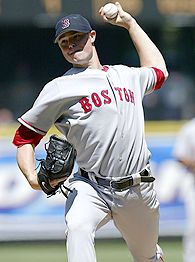 That hour-long trek was nothing like the harrowing odyssey that Lester, 23, began last August. In the middle of his rookie season, already having won seven games, he discovered the reason for the mysterious back pain he was suffering: He was afflicted with anaplastic large cell lymphoma.

Stripped of the ominous medical terminology, Jon Lester had cancer.

From diagnosis to treatment to triumph, Lester had made a journey that few could comprehend. The first victory, the most important one, had come last December when doctors told Lester he was effectively cancer-free -- pending periodic checkups. (According to numerous sources in the Boston medical community, non-Hodgkins lymphoma is highly treatable, with a cure rate of 80 percent rate for the general population.)

Next came spring training when Lester chafed at the Red Sox's understandably cautious approach. He didn't throw a single pitch in a Grapefruit League game as the team purposefully limited his workload to "B" games and camp games in the minor league complex.

Lester understood that the Red Sox had his best interest at heart, but he didn't want the special treatment. The competitor in him, the professional athlete inside, wanted to pitch and get on with restarting his promising baseball career.

The frustration grew when the Sox bypassed him for an open start in mid-May, and intensified when the team summoned another lefty -- Kason Gabbard -- from Pawtucket to take the spot of the injured Curt Schilling last month.

But Sunday, faced with declining performance from their No. 5 starter, Julian Tavarez (0-4 with a 7.71 ERA in his last five starts), the Red Sox decided that they -- and Lester -- had waited long enough.

"We've been staying up on this kid, I think it's pretty evident, all year," said manager Terry Francona. "Where we thought he was, what needed to happen, what's best for him, what's best for us. I think we got to a point where we thought this might be in his best interest and ours.  We've had a lot of conversations with a lot of people, trying to do the right thing."

"The constant battle of getting pushed back, the pitch counts, all of that -- it's been hard," acknowledged Lester. "But you have to sit back and see that they have your best interest involved and they want you to be healthy. It's been hard getting treated like you're in a glass bottle, so it will be nice to finally break through and get to go pitch again."

Lester's performance was uneven at times at Pawtucket. He struggled to maintain his velocity and didn't record many swings-and-misses. Even on occasions when his pitching line looked impressive, scouts and talent evaluators whispered that the numbers were more impressive than the stuff.

He posted a 4-5 record with a 3.61 ERA -- decent, but not dominant -- and the Sox were inclined to wait further. But the recent improvement of his cut fastball, his best pitch, and an obvious need for an upgrade in the rotation made it the right time.

"I feel good physically and mentally," said Lester, giving himself his own clean bill of health. "After my last start [seven innings pitched, three runs allowed], things are starting to come around."

"It just made sense," said general manager Theo Epstein of the move.

This will be an exciting time for [Lester], obviously. But at the same time, he's been expecting this. He fought through a lot, but he always expected to get back here. We'll prepare the same way we always do.

Many of Lester's teammates seemed as excited as the pitcher Sunday.

"He's definitely an inspiration to all of us," said closer Jonathan Papelbon. "We all go through ups and downs in life, and he went through a really big down in life and was able to fight through it and come back."

An unintended consequence of the timing has Lester making his 2007 debut on the road, postponing, for now, what will surely be one of the most emotional outpourings at Fenway Park in a long time.

His parents will travel from their home near Seattle to be at Jacobs Field, bringing some personal closure to the comeback. Last summer, they were so scared by the diagnosis, they begged the Red Sox not to reveal the reason for his absence. Monday in Cleveland, they finally can revel in their son's return to normalcy.

"I love to do this; this is my job," said Lester. "There's a lot of excitement. It's going to be surreal, but I'm going to enjoy it."

It will be Varitek's job to not only brief him on the Cleveland hitters and their tendencies, but also ensure that Lester's emotions don't get the best of him.

"This will be an exciting time for him, obviously," Varitek said. "But at the same time, he's been expecting this. He fought through a lot, but he always expected to get back here. We'll prepare the same way we always do."

Of course, routine aside, this will be no ordinary start. Jon Lester is already undefeated.