David Price is widely expected to be the top pick in Thursday's Major League Baseball draft. The 6-foot-5 lefty is praised for his excellent repertoire of pitches, but also for his poise and his reputation as an unselfish team player. In his junior year at Vanderbilt, Price went 11-1 with a 2.63 ERA and 194 strikeouts in 133.1 innings. The Murfreesboro, Tenn., native is likely to receive a signing bonus approaching $4 million in the very near future. But as his Facebook screen name "humbleurself34" implies, fame and money aren't likely to get to his head. Here's what Price had to say in a recent interview:

Jonah Keri: So there are a bunch of interesting tidbits on your bio page. You say your dream dinner guests would be Dave Justice, Will Smith and Christina Milian. Why Justice?

David Price: The closest team to my home growing up was the Atlanta Braves. I always watched them play. I just loved watching Justice play -- I wanted to play the outfield and hit lefty too.

JK: Around what age did you decide you wanted to be a pitcher instead? 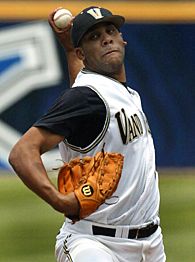 DP: I always thought of myself as a pitcher -- I'd often do both. When I was only a pitcher, though, I was only out there every five days and I didn't get to hit. So it wasn't as fun. But later on, I started focusing only on pitching. That's when I really started to improve.

JK: Give me a scouting report on yourself.

JK: One of the things you hear about young pitchers coming up is that they need to develop secondary pitches to succeed as they move up, from high school to college to the minors and eventually the majors. Has that been your plan too?

DP: Definitely. Last year I really worked a lot on my slider. I wanted two pitches I could command any time, in any count, not only for now but later on in my pro baseball career.

JK: You're known as a big strikeout pitcher -- you led the nation in K's in each of the past two seasons. When you're facing a batter, are you always thinking about striking him out?

DP: In my freshman and sophomore year that was my mentality, yeah. But coach (Derek) Johnson has taught me to pitch to contact. There would be times when I'd get to the fifth and sixth innings and my pitch counts would be so high, because I tried to strike out everybody. Now on 0-0, 0-1, I'm looking to get a groundball or a flyball when I can, try to utilize the defense a little more. Of course if I get two strikes on a hitter, I'm still going for the strikeout.

JK: Is that how you plan to approach big league hitters down the road?

DP: When you've got a big league defense behind you, obviously those are the best players in the world. So yes, it definitely makes sense to let the hitter put the ball in play at times, so you can stay in the game longer.

JK: You mentioned keeping your pitch counts down. You've had a few starts this year where you've thrown 120, 130 pitches or more. There's a lot of research out there that warns about high pitch counts for young pitchers. Are you ever worried that by throwing that much you could be raising your risk of injury?

DP: I feel like our pitching staff trains hard, both in the offseason and in-season. Throwing 110 pitches feels like a letdown for me. I want to throw 120, 130 pitches. Knock on wood, I haven't had arm problems in three years here. No one here complains about sore elbows or rotator cuffs. I feel like we train harder than anyone else, and that it pays off for us.

JK: The Dodgers drafted you in the 19th round in 2004, out of high school. The reports said that you'd have been ranked much higher, but that everyone knew you were going to Vandy. Did the Dodgers approach you at all with an offer? Did you consider going straight into pro ball from high school?

DP: I didn't even know that I'd been drafted until one of my friends called me and told me -- it was funny.

JK: So what made you so sure you wanted to go to Vanderbilt?

DP: I didn't feel like I was ready to play and compete at a professional level. I wasn't mature enough at that time. (Going to Vanderbilt) has benefited me greatly as a player and as a young man.

JK: Is there a pitcher that you idolize or try to emulate in your own approach?

DP: I like Dontrelle Willis a lot. He just goes out there and has fun, has a smile on his face every day. I enjoy watching him, whether he's struggling or dominating.

JK: Your slider has made great progress, but your fastball is still considered your best pitch. But I haven't seen this covered in too many scouting reports -- how often do you throw four-seam fastballs vs. two-seamers?

DP: It's about 80-20 four-seamers. When the count is 0-0 and I want a quick groundball or flyball, to get the hitter to make contact early, that's when I'll throw the two-seam. I'm usually going away to righties, in against lefties.

JK: How do you see yourself adjusting, going from pitching to aluminum bats to wooden bats? Do you think you'll pitch inside more against wooden bats?

DP: I guess for a lot of pitchers there's probably a different approach. You can get more cheap hits with an aluminum bat -- you jam a guy and he hits it over (an infielder's) head. But I don't feel like I would pitch any differently. I throw inside a whole lot right now, and that's not going to change.

JK: You go to Vanderbilt, which is known as an excellent school, one that's not easy academically. At the same time, you're about to sign a pro baseball contract worth millions of dollars. How do you balance class work with baseball? How do you even stay motivated to study, knowing what lies ahead?

DP: It's tough -- going to school at Vanderbilt is very hard, and so is balancing baseball, school and real life. You just have to take it by the reins and go with it. The biggest thing is that it's hard to plan your day, since you never know exactly what you're going to do. My freshman year it was obviously hard, coming from high school. Sophomore and junior years you can get into a groove, it's a lot easier. I'm always going to be motivated to do both, for as long as I'm here.

JK: OK, last one. One of your teammates is Pedro Alvarez, who's considered one of the best hitters in the country. What would you do if you were pitching to him?

DP: I'd hope he lines out somewhere (laughs). I don't know how to pitch him. Anywhere you throw it, he'll put a charge into it.

Jonah Keri writes the baseball column "Keri The 10" every Monday for Page 2. He is the editor and co-author of "Baseball Between the Numbers." You can contact him here.