Derek Jeter won't be diving into any box seat patrons' nachos in this World Series.

There will plenty of prime seats in George Steinbrenner's owner's box, too.

And when we listen to those familiar October tales of Harry Frazee, Bucky Dent and Aaron Bleeping Boone, they will actually be framed in the past tense, for the first time in Johnny Pesky's lifetime.

It may feel a little scary, a little disorienting, at first. We understand that. But we're here to reassure you that everything will be OK. Really.

We may have spent the last two weeks immersed in the overpowering gravitational pull of a Red Sox-Yankees duel that will reverberate forever. And we may then have been denied the perfect poetry of a Boston parade route that would have had to run right through Roger Clemens' locker.

But that, too, is OK. We won't allow any whining during this World Series, and we mean it. Any use of the word anticlimax will carry a mandatory sentence of 86 years watching Calvin Schiraldi highlight tapes.

This Cardinals-Red Sox World Series will not be an anticlimax. Won't be. Shouldn't be. Can't possibly be. And it's our job to refocus your attention by explaining why this Series can, and will, be just as riveting as the dramatics that preceded it.

There are compelling baseball reasons, naturally. Any opportunity you will ever get to watch Albert Pujols hit or Scott Rolen patrol third base (and several surrounding counties) or Jim Edmonds continue his never-ending Web Gem campaign should be ignored only if you are ready to renounce your title as an official American sports fan.

And any time Pedro Martinez takes the ball or Schilling limps back to the mound or Ortiz carries a bat to home plate with a game to be won, how can you not freeze in your seat, no matter how loudly the phone rings or how many times your wife suggests you pay the bills before they repossess the house?

But hey, we know the deal. We need more than just baseball to make this World Series true must-see TV. We need ghosts. We need demons. We need skeletons. We need (OK) curses. Fortunately, you don't need to look hard to find them -- even if the whole Bambino thing is now essentially moot.

The curse of Ted Williams
No one even knew there was any Curse of the Bambino the first time the Red Sox and Cardinals met in a World Series. That was 1946 -- a year the Red Sox actually came in favored.

But soon, 1946 would become the October when the still-upbeat citizens of New England would come to realize that if stuff could happen to the Red Sox, of course it would happen. Every freaking year.

Who would have known then that in a simple pre-World Series exhibition game scheduled to keep the boys in shape, the great Ted Williams would get drilled in the elbow by a Mickey Haefner pitch and be forced to play in pain throughout the Series?

Who would have known then that the great Splinter would get just five hits in seven games, every one of them singles, and drive in exactly one run?

Who would have known then that the Sox would still find a way to make it to Game 7 -- and then lose in the ninth inning, because the Cardinals' Enos Slaughter would somehow score from first base on a single?

Who would have known then that this would be Williams' only trip to a World Series and that it would be those dastardly Cardinals -- and their nasty Williams Shift -- who would haunt the Last of the .400 Hitters for the rest of his life?

Now, finally, the Red Sox can avenge the curse placed on them that October -- with two of the actual participants, Pesky and Red Schoendienst, still hanging around to tell us all about it. Somewhere in the cryogenics ice box, we know the Splinter will be riveted to the nearest TV screen, muttering something about Mickey Bleeping Haefner.

The curse of Bob Gibson
But the Cardinals weren't through inflicting their own special pain on Red Sox Nation. Twenty-one years later, they were back to screw up what should have been the everlasting joy of the Sox's magical Impossible Dream.

How could the Red Sox not have been the team of destiny in the 1967 World Series? After roaring out of ninth place one year to finish first the next? After winning one of the epic four-team pennant races ever staged? 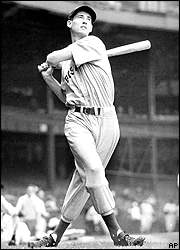 After riding the awesome wave of the last triple-crown winner of the 20th century, the still-revered Yaz, to their first trip to the Series since Slaughter's dash from first base? After their beloved 22-game winner, Jim Lonborg, one-hit the Cardinals in Game 2 and then three-hit them in Game 5?

And, in a microcosm of their whole season, after the never-say-curse Red Sox rallied heroically from a 3-1 deficit to force Game 7 in Fenway, with Lonborg on the mound?

Yeah, well, it seemed like a beautiful thing at the time. But once again, stuff happened. And the main stuff that happened was a guy named Bob Gibson.

The cursing in Copley Square that day was every bit as loud as the cursing of Bucky Dent. So cue that videotape. It's time for these Red Sox to finally avenge that.

The curse of Tony La Russa
But we don't want you to think the Red Sox always need to roll back the clock through multiple generations to locate all those demons they need to exorcise. In fact, they can find one of those demons located directly across the field in the other dugout.

That would be Cardinals manager Tony La Russa, a guy who hasn't cooperated one bit over the years with Red Sox's efforts to call in the Ghostbusters.

After the nightmare of 1986, you'll recall, the Red Sox were a team hungry -- even desperate -- to get back to the postseason, with Clemens and many of the same haunted characters, so they could finally make things right.

Sure enough, in the four seasons that followed, the Sox won the AL East twice -- in 1988 and 1990. Unfortunately, that's where the fun ended.

In both of those years, they had the thrill of playing La Russa's terrifying Oakland A's in the ALCS. Anyone want to remember what happened next?

Right. They played eight playoff games against teams managed by La Russa. They won zero. That's 0-8 if you're scoring at home in that New Red Sox Curse Scrapbook you're assembling.

At the time, that wasn't very enjoyable. But now, it was all worth it -- because it's just one more trip to the torture chamber that now can be expunged from that dark place in the Red Sox memory banks where it has been carefully stored for more than a decade. Heck, if need be, they can expunge Dennis Eckersley right off the postgame show.

The curse of Mike Timlin
For a while there, we thought there might be no connection whatsoever between the Red Sox World Series fiasco of 1986 and this current generation of Cardinals. And since this is supposed to be the postseason in which the Red Sox wipe every last one of their horror stories off their hard drive, that concerned us.

But as Boston Globe columnist Dan Shaugnessy has so eloquently chronicled over the years, everything in the entire world can be connected to the Red Sox. Everything. From the crime rate to the sock you just lost in the laundry.

So we dispatched our curse task force to investigate this one. And it took mere moments to locate the man who links it all together -- Red Sox reliever Mike Timlin.

Just a year before he joined the Red Sox, Timlin pitched for -- guess who? -- the Cardinals. Which means he was a teammate of Pujols, Edmonds, Edgar Renteria and Mike Matheny. He hung out in the same bullpen as Jason Isringhausen and Steve Kline. He came in to relieve Matt Morris and Woody Williams.

Now there's no crime in that, of course. These days, players change teams like the rest of us change shirts. But let's look more closely at Timlin's associates over the years.

While he was in St. Louis, he was also a teammate of Chuck Finley. And Finley had once been a teammate of -- yes, it's true -- Bill Buckner (on the 1988 Angels).

But wait. It gets worse. Timlin started his career as a reliever for the 1991 Blue Jays. And who played for those '91 Blue Jays? (Better sit down now.) Mookie Wilson.

So it's all becoming clear now. The man who connects every ghostly dot is poor Mike Timlin. If he gives up a game-turning three-run bomb to Pujols some night and you think you heard Buckner and Mookie cheering somewhere, now you understand.

Our advice to our pal, Terry Francona -- be very, very careful how you use Timlin over the next week and a half.

The curse of Dale Sveum
But if this World Series is to have true national appeal, it wouldn't be fair for the Red Sox to monopolize all the table-turning plot lines. So we're here to remind you that the Cardinals come into this World Series with their own demons to vanquish.

They've had their own October problems in the 22 years since the Willie McGee-Vince Coleman 400-meter relay team drove them to their last World Series triumph.

The 1985 and '87 World Series didn't end very happily. There was that 3-1 lead they blew against the Braves in the '96 NLCS (while getting outscored 32-1). There was even a division series, in 2001, in which Schilling just about personally prevented them from advancing in Game 5 -- whereupon Schilling and the Diamondbacks, naturally, went on to win the World Series.

But even this year, something really dangerous happened to the Cardinals: They won way too many games for their own good.

They won 105 of them, matter of fact. And that was big trouble -- because it was more than any other team in baseball.

In other sports, that wouldn't be considered particularly hazardous. But baseball isn't like those other sports.

The Cardinals get no home-field advantage in this World Series out of those 105 wins, even though that Red Sox team they're playing not only didn't have a better record but also didn't even finish in first place. Here, however, is an even bigger problem:

Five straight years now, the team with the best record in baseball has managed to avoid winning the World Series, in some way or another. You can look it up -- the '99 Braves, 2000 Giants, 2001 Mariners, 2002 Yankees and A's (103 wins each) and 2003 Yankees and Braves (101 wins each) all went home ringless. Which means the last team to have the best record in baseball and still win the World Series was the 1998 Yankees, a team that won 114 games, blew out the Red Sox by 22 games and lost just twice in 13 games in a ridiculous rampage through the postseason.

Ah, but look a little closer at those '98 Yankees. Among the men who played for that team -- a fellow named Dale Sveum.

OK, so he didn't play much (only 58 at-bats, and a whopping nine hits). But that's just a technicality. It's a technicality because he carries his own personal link to this World Series in more ways than one.

He's now the third base coach for the Red Sox, a team whose mission is to rally around him and preserve that special curse destined to befall all future teams that attempt to outwin the rest of the sport and then wangle a parade out of it.

That's a trick that has never worked for the Red Sox. So why should they allow some team that once employed Bob Gibson and Enos Slaughter to pull it off against them? Now there's a cause the Idiots ought to be able to rally around.

Have a fun World Series.