ST. LOUIS -- A hundred years from now, how will we make people understand what just happened here?

How will we ever make them understand what happened The Year The Red Sox Finally Won The World Series?

There was no way they could ever do this the good old normal way. Never. They're the Red Sox.

They had fathers and grandmothers and many a lost generation to redeem, to heal, to shower in tears of joy.

So their work wasn't easy. They always understood that. But who would ever have figured on this? Who would have ever figure it would take the most amazing week and a half in the history of sports?

Nobody goes from humiliation to annihilation in 11 insane days. But the Red Sox did.

Nobody goes from sweep-ee to sweep-er in 11 life-altering days. But the Red Sox did.

The Boston Red Sox won the World Series. We saw it with our own eyes.

"They can take that curse thing now and put it where the sun don't shine," said Keith Foulke, the man who threw the final pitch of the 3-0 victory that completed a four-game obliteration of the St. Louis Cardinals. "That curse is over. Now we'll never have to hear about that thing again."

Well, not in the present tense, anyway. But as long ago as 1918 seemed Wednesday night, Oct. 17 might have seemed even longer ago.

Tell us this really happened. Tell us that, on Oct. 17, this team was really three outs away from getting swept by the Yankees, and the only way to stay alive was to score a run off the Greatest October Closer in the History of Mankind, Mariano Rivera.

And then tell us this really happened. Tell us that, just 11 days later, with no pinstripes within a thousand miles, Pedro Martinez was racing around the outfield of Busch Stadium lifting the World Series trophy above his head. And hundreds of Red Sox fans remained frozen in their seats in this strange stadium in this strange land, chanting in unison at a 1.8-trillion decibel level: "Red Sox Nation. Red Sox Nation."

OK, it really happened. We have witnesses. But how? In 11 days? This wasn't a comeback. This was a reincarnation.

Rack your brain. Tell us any team ever, in any sport, ever had a week and a half like this team just had. From down, 0-3, in one series -- to sweeping the World Series?

"Never," Doug Mientkiewicz said. "It would be hard to do it again. I know that. But I think one thing this group never stopped doing was believing it could win. Even down, 0-3, guys were standing in this clubhouse saying, `Don't let us win one, because we just might get on a roll.'"

A roll? Heck, it was more like a tsunami. But as it turned out, it wouldn't be 100 percent true to say that everyone believed back then. We have witnesses for that, too.

"I understand," GM Theo Epstein confessed, "that certain people in this organization were literally writing their concession speeches around the seventh inning of Game 4. Not me, of course. But people were putting together speaking points -- about how deeply disappointed we all were, things we'd be working on to get ready for next year. I mean, it didn't look real good."

Yeah, you might say that. But even as that ninth inning began that night, as the great Mariano flipped his warm-ups toward home plate, the men in the other dugout were already plotting just how the world was about to change.

"We knew if we could just get one guy on, we could get Dave (Roberts) in the game," Mientkiewicz said. "And Dave has the ability to steal second, even when everyone in the world knows he's going. And then that's just how it worked out. It just seemed like every time our backs were against the wall, we had the right guy in the right place to do exactly what he was capable of doing."

Could you possibly sum up this last week and a half better than that last sentence? Right guy? Right place? Right everything? From that moment on -- for 11 days, for eight mind-boggling baseball games -- everything went right.

For the Boston Red Sox.

For a week and a half, it seemed as if all that Stuff That Always Happened to the Red Sox was suddenly happening for the Red Sox.

But it changed, all right. Did it ever.

So of course, Kevin Millar drew a walk against Rivera. And of course, Roberts pinch-ran for him and stole second. And of course, Bill Mueller slapped a single past the sprawling Mariano to tie the game. And of course, David Ortiz bombed a walkoff homer in the middle of the night to win it.

And so the tidal wave began. The comeback against Rivera again the next day (well, actually that day). The Ortiz blooper that won Game 5 in the 14th. The astounding masterpiece pitched by The Man With The Bloody Sock (Curt Schilling) in Game 6.

The Game 6 call that somehow went their way -- in Yankee Stadium -- when A-Rod played The Karate Kid. The Johnny Damon-Derek Lowe Show that fueled that historic Game 7 wipeout.

And then on to the Series, where the big wheels just kept on turning. Damon doubling to lead off the first inning of Game 1. Ortiz homering to make it 4-0. Four errors. Manny's Divot. Red Sox 11, Cardinals 9. And little did we know -- this Series was over.

"I was worried, after New York, that we wouldn't have enough juice to get back out there and grind it out and do it again," Mientkiewicz said. "But this group never stopped believing. We just kept saying, `It's our time.'"

And that's exactly what it was -- their time. The Cardinals won more games than any team in baseball this year. The Red Sox made them look like the Canton Crocodiles.

It's hard enough to sweep a team that won 105 games. But the Red Sox didn't just sweep these Cardinals. They dismantled them.

The Cardinals became the first team in the history of the World Series to trail at some point in every inning of every game. The most feared lineup in the National League hit .190 for the World Series, .143 after Game 1. Of the last 84 Cardinals hitters to come to the plate, 74 of them made an out. Over the final three games, they had one multi-hit inning.

Schilling won again in Game 2. Pedro turned back into Pedro in Game 3. And then there they were in Game 4, one win away. 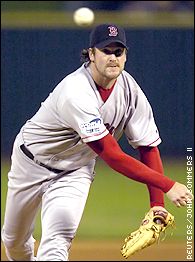 From the moment Damon smoked the fourth pitch of the evening into the Cardinals' bullpen, for the first Red Sox World Series leadoff homer in 101 years, you knew. It was their time. Really.

Two innings later, Trot Nixon got a 3-and-0 green light, with two outs and the bases loaded -- and squashed it halfway up the right-field fence for two more runs. It was their time. Wasn't it?

"Not at all," Nixon said. "Not with the kind of lineup those guys have. We knew we were still going to need a great pitching performance.  When you've got the enemy on the side of the cliff, you need to step on his hand and let him fall. You don't give him the opportunity to get his hand back up on the mountain."

But the innings went by, and the hand still hung on that mountain. A half-dozen Red Sox hitters came to the plate with a chance to put this thing away, so all those paramedics all over New England could go home. But nobody could get that hit.

They had to leave 12 runners on base -- seven in scoring position. They had to. They're the Red Sox.

"I'm telling you, man. That was gut-wrenching," Nixon said. "I couldn't take it. I probably won't sleep for three days after that. But that's just the way we go about it around here."

On this night, though, Lowe wouldn't let that lead shrink. He pounded those Cardinals with sinkers for seven brilliant three-hit innings. Then he passed the ball to Bronson Arroyo, who passed it on to Alan Embree, who handed it to Foulke. Who got to do what Calvin Schiraldi and Bob Stanley and Dick Drago never got to do:

Throw that pitch. The pitch that ended an 86-year nervous breakdown.

"I don't even remember it, to tell you the truth," Foulke would say later, drenched in champagne from his head to his socks. "What kind of pitch was it? It was an out. That's all I know."

It was an out. That's all that mattered.

Just minutes before, Foulke had stood there, 60 feet away from the man who would make that out (Edgar Renteria), thinking about how shocked he was to feel as calm as he felt.

"It was probably a lot tougher, sitting in the stands, or watching on TV, or watching from the dugout," he said. "It was a lot easier to have the ball in my hand than it was to watch."

If he only knew. The tying run was on deck. All across the universe, the hearts of all those Red Sox fans -- young or old, husband or wife, son or daughter, uncle or aunt, grandma or grandpa -- were pumping faster than hearts should be allowed to pump.

And then Edgar Renteria was one-hopping That Out right back to the mound. Right to Keith Foulke. Who stabbed it out of the air. And began trotting toward first base. Where he flipped it to Mientkiewicz. And at that moment -- 10:40 p.m. in the Central Time Zone -- the world became a whole different place.

The Boston Red Sox had won the World Series.

"It didn't take long to sink in," Foulke said. "At first, it was a strange thing. You never know what's going to happen until the last out is made. But after it's made, I found myself saying, `Whoah. We did it.'"

How can anyone ever explain the most amazing week and a half in the history of sports? Was it really only 11 days earlier they were three outs away from another one of Those Winters? It seems like 11 years ago now.

"I'll tell you what," Epstein said. "I think I was only 14 during that Angels series, it seems so long ago. I can't even remember that anymore."

Aw, but who cares? He'll remember this night. Who won't?

It was The Night The Red Sox Won The World Series. The night they set the ghosts free.

They had to. They're the Red Sox. And now they're something they haven't been for 86 paralyzing years.

Now, finally, they're the champs.