Eric Young has a 3-month-old son, Dallas Dupree, who brightens every day this offseason. But the joy and sleep deprivation that accompany life with a newborn can't sway him from his winter routine.

Several days a week, Young drives to the Baseball USA Center near his Houston home and gets down to business with friend and training partner Randy Brown. When Young isn't in the batting cage or playing catch, he's running, lifting weights and doing flexibility work to keep his 39-year-old body in tune.

Young, a veteran of 15 seasons with Colorado, the Los Angeles Dodgers and five other clubs, is accustomed to the grind. The difference this year is, it's late January and he's still unsigned. Just try mustering some enthusiasm for that next abdominal crunch when spring training is three weeks away and you're unemployed. 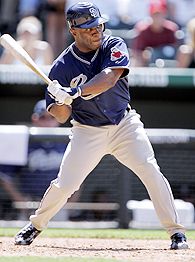 "Going through the drills, you wonder, 'Is this all for naught? Is it worthless because I don't have a job?''' Young said. "But from a baseball standpoint, I want to be ready if a team calls. I don't want to go to spring training and fall on my face. That's what keeps me going.''

This is the flip side of the opening segment of "SportsCenter.'' Life on the open market was a glamorous proposition for Alfonso Soriano, who signed an eight-year, $136 million deal with the Cubs before Thanksgiving, and Barry Zito, who spurned the Mets and Rangers for a seven-year, $126 million contract with San Francisco.

Meanwhile, lots of established players inhabit a more stressful universe. For Steve Finley, Steve Trachsel, Mark Redman, David Bell, Ronnie Belliard, Bernie Williams, Preston Wilson and others, life is all about calling their agent, reassuring the wife and kids that everything will be fine, and coping with the realization that their skills are no longer in demand.

It's not only players who feel the strain. Now that budgets are almost tapped out, 40-man rosters are nearly set and teams have turned their focus to salary arbitration cases, free agent shopping is less of a priority. Agents, in the quest to find jobs for their clients, walk a fine line between persistence and pestering front offices.

Axelrod, who has negotiated $20 million-plus deals for Matt Morris and Matt Clement the past two years, is swimming in the shallow end of the pool this winter. He's trying to find work for pitcher Rick Helling and first baseman/DH Phil Nevin, who has attracted minimal attention despite hitting 22 homers in 397 at-bats with Texas, Minnesota and the Cubs last season.

Every other transaction, it seems, eliminates a potential option. Axelrod thought Baltimore might be a fit for Nevin until the Orioles re-signed Kevin Millar. He hoped things might work out with Oakland, until the A's signed Mike Piazza. Then Atlanta briefly had a need for a veteran bat, only to fill it with Craig Wilson.

Nevin, 36, has earned almost $40 million in the big leagues, so it's less a question of financial security than handling the uncertainty. He knows he might be scrambling for a spring training apartment on Valentine's Day, and he's in the same fraternity as other players who have had to revise and re-revise their expectations.

"Going through the drills, you wonder, 'Is this all for naught? Is it worthless because I don't have a job?' But from a baseball standpoint, I want to be ready if a team calls. I don't want to go to spring training and fall on my face. That's what keeps me going."
-- Eric Young

Mark Loretta, who aspired to a starting second base job this winter, settled for a utility role with Houston. Sammy Sosa, who scoffed at a minor league deal with Washington last spring, is on the verge of accepting one with Texas. And Brian Jordan, who claims to be in terrific shape after four straight injury-marred seasons, might have retirement thrust upon him if nobody bites.

For teams so accustomed to being at the mercy of agents in November and December, the leverage has shifted. As players become less demanding, the clubs can afford to sit back and watch the prices drop. Last year, free-agent catcher Bengie Molina didn't sign with Toronto until Feb. 6.

"It's supply and demand,'' Padres general manager Kevin Towers said. "Even in the inflated market we live in today, there will be some bargains out there in the next few weeks. Are you willing to be patient as a general manager and wait and leave yourself enough roster flexibility? There's probably a guy or two out there who are good fits for you.''

Nevin, who has never lacked for self-confidence, is discovering that life as an afterthought can be a real pride buster. When his friends recently gathered to celebrate his 36th birthday, Nevin's uncertain job status was the proverbial elephant in the room. One party guest, in an attempt to lighten the mood, joked that he's going to buy Nevin the book, "Unemployment Forms for Dummies'' to help him weather the ordeal.

"We all feel terribly that Phil's in this situation right now,'' Axelrod said. "Everybody was encouraging him and pumping him up and saying, 'Hey, something is going to open up.'''

Young has reasons other than pride and stubbornness to try to stick around: He wants to play with his son, Eric Jr., a fleet second baseman who stole 87 bases for Colorado's South Atlantic League affiliate in 2006. Young said his agent, Dan Horwits, talked to the Rockies, only to be told that a job for dad "wouldn't be a good match.''

So Young continues to work out, eat right, enjoy his infant son and keep an open mind. He's willing to entertain a minor league offer with an invitation to major league spring camp, and would be ecstatic with a garden-variety backup job.

"There are guys who can sit on the bench for a week and still give you competitive at-bats and perform at a level defensively that won't hurt the team,'' Young said. "That's what I bring. And I bring that positive attitude each and every day.''

If Young is positive now, just imagine how upbeat he'll be if he actually makes it to spring training.