With all due respect to Greg Maddux, Barry Zito and Jose Mesa, there's really not much competition for the title Hottest Pitcher Acquisition of the Offseason. Clearly, that great honor goes to Daisuke Matsuzaka, Boston's $103.1 million man. Not only did the Red Sox vastly outbid their competitors merely for the right to negotiate with Matsuzaka, but they're expecting him to immediately help them vault back into contention after finishing third in their division last season. 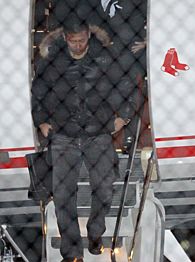 Now that the Sox have their man, the general feeling is that they've got themselves a good pitcher. But how good, exactly? Is he a potential Cy Young candidate? Or "just" a solid No. 2 or 3 starter with a team that desperately needs one? Few observers seem willing to commit themselves, for the simple reason that Matsuzaka has never thrown a single pitch in a major league baseball game.

But does that mean we don't have any evidence at all regarding his abilities? Not at all. We have our eyes, and most of our eyes tell us that Matsuzaka's an excellent pitcher. We also have a great deal of statistical evidence. No, "The Monster" hasn't pitched in the American League or National League. But there is a degree of cross-pollination between Japan's major leagues and ours, and through a complex series of statistical comparisons one can arrive at "translated" statistics for Japanese players (more on that in a moment). And finally, though most imported Japanese pitchers serve as poor analogies -- because upon arrival they lacked Matsuzaka's youth and track record -- we do have one interesting point of comparison: Hideo Nomo, who pitched brilliantly in Japan before joining the Dodgers when he was only 26.

How did Nomo come to arrive on these shores at so tender an age? In 1994, he suffered a relatively minor shoulder injury, and retired. Or rather, he "retired," because thanks to a loophole in the rules of the time, a "retired" player could become a free agent and sign with whomever he liked.

Nomo was only the second Japanese player in the majors, and the first starting pitcher. Nobody really knew what to expect, except nearly everybody expected him to face a tough adjustment while learning to pitch against (most of) the best hitters on Earth. What nearly nobody expected was for Nomo to pitch better in North America than he had in Japan  but that's exactly what he did. In his first season with the Dodgers he posted a 2.54 ERA that was better than anything he'd done in Japan. Here's what he did in his last three seasons in Japan's Pacific League and his first three in our National League:

Somehow Nomo cut his walk rate significantly, which allowed him to lower his ERA as well. Does anybody want to explain how this particular pitcher improved upon facing tougher competition? We may theorize, of course. Perhaps Nomo benefited from better medical attention, or better instruction, or less strenuous workloads. Or perhaps he was, at 26 during his first season with the Dodgers, just hitting his stride.