What's really impressive is the sort of player Sizemore is: powerful enough to collect 92 extra-base hits and speedy enough to bat leadoff. In fact, according to the Elias Sports Bureau, those 92 long hits were the highest total for a major league leadoff man since at least 1957. Also last season, Sizemore became the second player in major league history to finish with at least 50 doubles (actually 53), 10 triples (11), 20 homers (28) and 20 steals (22) in the same season. The first was Phillies outfielder Chuck Klein, who played in the 1930s, and his home ballpark was the prototypical bandbox.

Granted, Sizemore's statistical blend of power, speed and defense in 2006 doesn't mean he's the equal of -- let alone better than -- Ty Cobb and Willie Mays, just because he's done something that they didn't do, precisely. Mays never hit 50 doubles in any season. He did hit more than 10 triples in five seasons and more than 40 home runs in six seasons. He stole more than 30 bases in three seasons. Statistics do not lie, but they can be misleading. 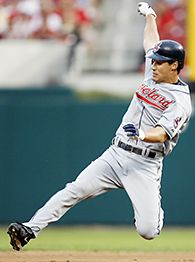 Statistically, only one player in major league history is truly similar -- considering the raw stats -- to Sizemore through his age 23 season (2006). That player is Duke Snider, who, like Sizemore, played sparingly in the majors at 21, emerged as a top center fielder at 22, and became a legitimate star at 23. While it's hard to imagine Sizemore's someday rivaling Cobb and Mays for the affections of baseball historians, it does not seem far-fetched to suggest that Sizemore might really be considered in Snider's class. And Snider's in the Hall of Fame.

Perhaps what's most interesting about Sizemore is that few saw him coming. Yes, the Indians were thrilled when they picked him up in the 2002 trade that sent Bartolo Colon to the Expos. But after Sizemore completed that season, all of which he spent in Class A, the mavens at Baseball America did not rank Sizemore among the game's top prospects. The next season, though, he did establish himself as the Indians' No. 1 prospect. I asked the club's assistant general manager, Chris Antonetti, when they realized just how good Sizemore might be.

"It is difficult to pinpoint a specific moment," Antonetti wrote in an e-mail message on Tuesday. "Even before we traded for him, we knew that Grady was an exceptional person and competitor with tremendous athletic ability. While we certainly liked his baseball skills and thought he had a chance to be a very good player at the time of the trade, I can't tell you that we thought he would be among the best players in baseball. To his credit, Grady has achieved to his remarkable potential through an unrelenting work ethic, incomparable intensity and dedicated commitment to the game. He is a special talent but an even more impressive person, teammate and competitor."

Of course, there are a lot of impressive players in professional baseball, and few of them develop as Sizemore has. You pay your money and take your chances, and the acquisition of Sizemore might someday be hailed as one of the cannier in this century.

In terms of both ability and performance, then, Sizemore is "hot." But that's not the only reason he's the subject of this essay. He had the ability and the performance last year, and few fans outside of Cleveland and fantasyland even noticed. What makes Sizemore hottest is his team, which is poised to jump from fourth place to first place. If that happens, people are going to be looking for explanations, and "Grady Sizemore" is the best candidate, given his youth, his talent, and (yes) his looks.

But a baseball career is not a mirrored ladder, with the first half trending inexorably upward, the second half downward. The general trends might look like that -- actually, we know they do -- but if you graph a player's performance by age, you'll see what looks like a staircase that isn't sure what it's trying to do. What's most likely is that Sizemore, like Snider before him, will drop off some in his third full season, if only because his 2006 was so brilliant that a repeat is unlikely. He will rank as one of the best players in the American League, and at this point the only question is how long it takes before everybody knows it.

Senior writer Rob Neyer writes for Insider three times most weeks during the season. You can reach him via rob.neyer@dig.com, and his new book, "Rob Neyer's Big Book of Baseball Blunders," is available everywhere.