At times, it is difficult to get Chicago's two baseball teams to even acknowledge that the other one even exists.

Through the years, the White Sox steadfastly have denied that the Cubs are their competition. After the White Sox won the World Series in 2005, the Cubs shrugged their shoulders and tried to act like they barely had noticed.

So it was telling that Ozzie Guillen -- who else? -- broke the code during a weak moment this winter. The White Sox manager pointed a finger northward after family friend Freddy Garcia, the Game 4 winner in the 2005 World Series for Chicago, was traded to Philadelphia, bringing his wife to tears and creating angst for his children and South Side fans everywhere.

''It's not about saving money, it's about feeling comfortable with what we have,'' Guillen told the Chicago Sun-Times. "The problem is what's going on next door, [with the Cubs] throwing money around the way they have.'' 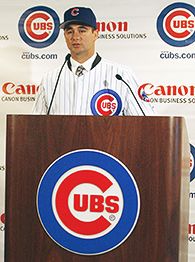 White Sox chairman Jerry Reinsdorf and his general manager, Ken Williams, choose their words more carefully. Instead of the Cubs, Williams blames "the market'' for forcing him to make some difficult decisions -- specifically the downsizing of the veteran starting rotation that has led the major leagues in innings pitched in both of the last two seasons.

But seldom has there been a winter when the Cubs were so obviously the yin to the White Sox's yang. Or is it the other way around?

After a season in which the defending World Series champs captured the city's ratings battles for the first time in a very long while and threatened the Cubs at the gate, the Tribune Co. finally did what fans have urged for years. It began using its financial clout to attack its baseball problem.

Andy MacPhail, the long-time Cubs club president, and manager Dusty Baker were fired at the end of a 66-96 season. John McDonough, the marketing genius promoted to interim club president, did what MacPhail never had, persuading his bosses to spend heavily in the free-agent market.

Last seen, the Cubs had committed over $300 million in a signing spree that began with manager Lou Piniella and was headlined by the top player on the market, 40/40 man Alfonso Soriano. Third baseman Aramis Ramirez, a one-time All-Star, received a $75 million extension after exercising an early out clause in his contract.

The most telling contract, however, might have been the four-year, $40 million deal that Hendry finalized with 30-year-old left-hander Ted Lilly while he was experiencing chest pains that led to his winter-meetings angioplasty.

That's a lot of money to pay to a guy who is taking a 59-58 record to his fifth major league team.

The Cubs made an identical offer to Gil Meche, who wound up with a five-year, $55 million deal from Kansas City, before agreeing to a three-year, $21 million contract with Jason Marquis that raised an obvious question. What would he have gotten had his earned run average been better than 6.02 last year?

No team figures to feel the impact of these contracts more than the White Sox. They have constructed their strongest team in four decades through player development, inspired acquisitions and consistently prudent management of their payroll -- in other words, winning the right way.

Reinsdorf allowed that payroll to jump to $103 million last season, with Williams' acquiring Jim Thome and Javier Vazquez and spending heavily to keep Paul Konerko from jumping to the Los Angeles Angels. Williams positioned the Sox to continue their run of 90-win seasons at least a little longer, as there were no significant free agents after the 2006 season.

But after the Cubs signed Ramirez for $15 million per year, Williams told reporters that he no longer expected to be able to sign his third baseman, Joe Crede, to a long-term contract. He's two years away from free agency and represented by Scott Boras, so it appears likely he'll be replaced by top prospect Josh Fields after 2007, if not before then.

Reinsdorf believes long contracts for pitchers are foolish. He hasn't signed off on a deal of more than three years to a pitcher since giving Jaime Navarro a four-year contract in 1996, and appeared wise when guys such as Alex Fernandez and Wilson Alvarez crashed elsewhere.

But at the end of 2006, the White Sox found themselves with Garcia and Mark Buehrle signed for only one more year and Jon Garland and Vazquez under control for just two more seasons. All four of those guys have résumés that put guys like Lilly and Meche to shame, so keeping them would figure to be very expensive in the rising market.

Reinsdorf appears to have ordered Williams to be ready to replace all of them within the next two years, while building around 35-year-old Jose Contreras, who is signed through 2009. Garcia was the first to go, traded to Philadelphia for two young pitchers, Gavin Floyd and Gio Gonzalez.

"Some of these things are unpopular,'' Williams said. "But you know what would be more unpopular? If we did nothing and got old and got too expensive and then had to go out scrounging for leftover talent and overpaying for mediocre talent."

Hmmm. Who could he be talking about?

Changing parts is nothing new for the White Sox. They won the World Series the year after allowing Magglio Ordonez to leave as a free agent and trading Carlos Lee, both for economic reasons.

"Some of these things are unpopular. But you know what would be more unpopular? If we did nothing and got old and got too expensive and then had to go out scrounging for leftover talent and overpaying for mediocre talent."
-- White Sox general manager Ken Williams

Williams seems to believe he and his staff can shuffle starting pitchers and uproot key players such as Crede and Jermaine Dye (eligible for free agency after next season) without compromising the chance to become a perennial playoff team -- not that he wouldn't want to ride these guys longer.

As recently as the general managers' meetings in November, Williams insisted he might not make any significant changes for 2007. Yet most expected he would trade one pitcher (Garcia or Vazquez, most likely) to get 23-year-old Brandon McCarthy in the rotation.

The surprising thing about the Garcia trade was that it didn't bring back a proven reliever or another player who could be counted on to help. Still it wasn't as revealing as what almost happened a day later, when Williams was on the verge of trading Garland to Houston for center fielder Willy Taveras and pitching prospects Jason Hirsh and Taylor Buchholz.

That deal fell through when the White Sox learned that Buchholz had undergone surgery to repair his labrum two years ago, and Houston went on to send that same package of players to Colorado for Jason Jennings and Miguel Asencio. But it showed that Williams meant it when he declared himself "still open for business'' after the Garcia trade.

In an interview with MLB.com, Reinsdorf decried "the madness that is in the market today.'' He expressed exasperation with Buehrle, not for his subpar 2006 but for allowing himself to be photographed wearing a backwards St. Louis Cardinals cap while attending a World Series game at Busch Stadium.

"Then, we have Buehrle, who is a free agent [after next season] who walks around wearing a Cardinals hat,'' Reinsdorf said. "You have to think he's going to be tough to re-sign. When you have a chance to move one guy who is close to free agency and come back with power arms, you have to go for it."

The track record and popularity of the pitchers has become secondary to the problematic nature of signing them to contract extensions.

"When clubs start worrying about whether fans are going to like or not like a deal, that's when they get in trouble," Reinsdorf said. "We have to do what we think is right and then be judged on the decision after a period of time. Our judgment is that you've got to continuously refresh your program."

Williams admits he's surprised by how quickly the rising costs for players -- pitchers especially -- caught up to the revenues generated by record attendance at U.S. Cellular Field.

Hendry makes no apologies for having driven the market upward, saying the Cubs "owed it'' to their fans to deliver a winner. If it causes teams like the White Sox some distress, well, that's their problem. The Cubs figure they've had more than their share in recent years.