LAKE BUENA VISTA, Fla. -- It was just a baseball trade, just a collection of names in the Transactions column. But for Kenny Williams, for the White Sox, it felt like something more than that. 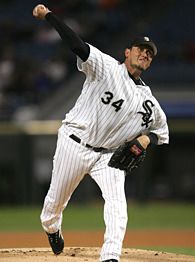 The White Sox traded pitcher Freddy Garcia to the Phillies on Wednesday for former No. 1 draft pick Gavin Floyd and a player to be named later (one-time White Sox pitching phenom Gio Gonzalez)  whom Williams then accidentally named at the press conference about 30 seconds later.

It was a trade the White Sox made to sustain both their future and their present. But by breaking up the four starting pitchers the White Sox rode to their first World Series title since 1917, Williams turned a symbolic page in the life of his franchise.

"Man, Freddy Garcia was so great," the White Sox GM said, his voice literally quivering with emotion, Wednesday night, "he thanked me for the opportunity to come over and win a World Series. He asked me, if he saw me in a bar, could he sit down and buy a drink for me. By the end of the conversation, he had me apologizing for trading him."

It was a trade that opened a spot in the rotation for Brandon McCarthy, whose time has clearly come. But more than that, it was a trade that went down less than 14 months after Garcia and his fellow starters  Mark Buehrle, Jose Contreras and Jon Garland  finished off one of the great postseason runs by any starting rotation in the division-play era.

Those four went a combined 9-1, with four complete games and a 2.71 ERA, in that postseason  a four-week run of dominance that ended in a shower of ticker tape. But by the time Williams arrived at the winter meetings last weekend, he knew it was time to begin looking ahead, to begin assembling the next White Sox pitching generation.

So he told teams he was willing to talk about "any of our players"  but, in reality, mostly about Garcia, Javier Vazquez and Buehrle in particular. And when the Phillies began to bear down on Garcia almost immediately, the two sides quickly found they had the makings of a deal.

Williams talked to a number of teams and listened to a bunch of proposals. But by Wednesday afternoon, he'd concluded that "even if we were to wait on some of the other [free-agent] signings [to lure more teams into the bidding], we'd have been hard-pressed for this particular deal to get any better."

Floyd was once the fourth player picked in the entire 2001 draft, behind Joe Mauer, Mark Prior and Dewon Brazelton. But he seemed to go backward over the last two years, when he went 18-18, with a 5.98 ERA while bouncing between Triple-A and the big leagues.

Nevertheless, Phillies assistant GM Mike Arbuckle compared him to "late bloomers" like Chris Carpenter and Garland. And Williams said the White Sox still project Floyd as a No. 1, 2 or 3 starter down the road.

Gonzalez's name wasn't supposed to be identified until after Thursday's Rule 5 draft of unprotected minor leaguers. But his inclusion in the deal was a badly kept secret; ESPN had already reported his name as being part of the package, and even Williams forgot, when he went to the podium, that this was top secret stuff.

So he began extolling Gonzalez  whom he'd traded away only a year earlier in the Jim Thome deal  as being "very special," until it hit him, in midsentence, what he'd done. Whereupon he attempted some emergency rephrasing  "the player to be named later is a special guy in his own right"  but it was just a hair too late.

That caused Williams to moan after the press conference that he'd probably get fined for this faux pas. But he sure wasn't moaning over reacquiring Gonzalez, who finished second in the Eastern League in strikeouts this year, with 166 in 154 2/3 innings, and then punched out 20 more hitters in 16 innings in the Arizona Fall League. He is viewed as being at least a year away from the big leagues.

Normally, when you hear the White Sox connected with any kind of trade rumor, your first inclination is to ask which superstar Williams is chasing now. But he also recognizes the need to balance the present and the future.

"We were the only 90-win team that didn't make the playoffs this year," he said. "And we still feel like, if we'd gotten there, we had a hell of a chance. But I've got a responsibility, a responsibility not just for now but for tomorrow. And even if we win in 2007, in Chicago if we spend 2008-09-10 losing 100 games, believe me, you're the village idiot. It doesn't matter what you've done before."

How the trade affects the Phillies
One team's vision of the future is another team's attempt to live for the moment. And that's exactly what Freddy Garcia is to the Phillies.

He can be a free agent a year from now. So he might not stick around Philadelphia very long. But for the Phillies, his acquisition serves two very important purposes:

"Our feeling is, he gives us more options," said Arbuckle. "Right now, I think everybody sees what this pitching market is. And obviously, with an extra starter, it gives us an opportunity to see what we might be able to do."

There has been speculation that the Phillies would turn around nearly immediately and deal Lieber to Milwaukee for reliever Derrick Turnbow and outfielder Kevin Mench. But indications late Wednesday night were that the Phillies had backed away from that deal.

They're more likely to wait a while for the free-agent market to settle. Then they plan to listen to offers for all of their starters except Ace of the Future Cole Hamels. But the odds favor a deal involving Lieber, who is a year away from free agency himself and earning a modest $7.5 million next year.

"This puts us in the position of having good options to offer other clubs," Arbuckle said. "We don't know what that option will be yet. But looking at all the starting-pitching options  ability, dollars, everything  we feel like we may have another piece within that can bring us some quality in another area."

More important than that, though, is what Garcia potentially provides in his area. No Phillies starter pitched 200 innings this year. But Garcia has topped 200 six seasons in a row. The only current starter in the big leagues with a longer 200-inning streak is Livan Hernandez (with seven). Just two Phillies  Robin Roberts and Steve Carlton  have had streaks that long in the entire live-ball era.

Arbuckle described Garcia as "a proven winner" Wednesday. And it's hard to argue with that. He is 45 games over .500 (116-71) in his career. His career winning percentage (.620) is eighth among active pitchers. And he is one of nine active pitchers who have averaged 15 wins a year over the last six seasons.

In a horrendous pitching climate, he was, without question, the best rotation arm on the trade market. And Garcia had pitched for Phillies GM Pat Gillick in Seattle.

So the Phillies zeroed in on the 30-year-old right-hander practically from the moment their delegation arrived at the meetings.

"We don't see anybody else out there [worth getting] from a tradable standpoint," Arbuckle said. "When we look at it, I don't see a lot of quality starters available. There still, obviously, are a few that are available on the free-agent front. But from the standpoint of guys who are movable parts for clubs, we felt he was clearly our best option."