Here we thought Barry Bonds' magic number this year was going to be 22.

That, of course, is the number of home runs he needs to roar past Hank Aaron and make Bud Selig's day.

But it turned out Barry's real magic number was 53. 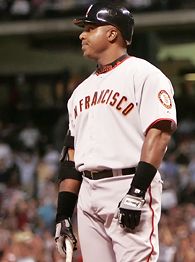 Which was the number of days it took Bonds, agent Jeff Borris and the Giants to actually wrap up a contract that looked pretty much agreed to way, way back when there were still plenty of shopping days before Christmas.

You could write a novel in 53 days. You could walk from Disney World to downtown San Francisco in 53 days. Heck, it wouldn't be out of the question for Barry to get from Opening Day to home run No. 756 in 53 days.

So why the heck did it take Bonds and the Giants 53 days to agree on something they theoretically had already agreed to?

Hey, this is Barry Bonds we're talking about. You think anything involving this guy is simple?

It took 53 days, for one thing, because the Giants clearly had second thoughts.

One baseball official who spoke to the Giants' brass regularly over these last eight weeks says they entered these negotiations with mixed feelings about whether to bring Bonds back. So when all sorts of (ahem) other issues arose after they agreed on the money, some of those feelings got to be more mixed than ever.

It also took 53 days because the Giants were never going to do this deal without reaching agreement with Bonds over a lot more than money.

Owner Peter Magowan said, pointedly, Monday night that the Giants needed to be "convinced" first that they would "be able to function as a team." That word, "team," was always a major club issue in these negotiations. And after Bonds reportedly linked teammate Mark Sweeney to his positive amphetamine test, it became an even bigger issue.

So before these two sides reached agreement once and for all Monday, they needed one last marathon face-to-face chat to iron out those items.

According to Borris, he personally met for four hours Monday with the men who run the Giants. Then the two sides brought in Barry himself for two more hours of constructive yakking.

Borris' carefully worded description of why that meeting was necessary: "There are just times when an employer and an employee have to have a meeting to discuss the dynamics of their work situation."