Was there any event that summed up baseball's wacko winter better than this:

A general manager's signing a free-agent pitcher to a $40-million contract while hooked up to an EKG machine?

This actually happened, you know. In real life. And of course, this occasion could have involved only one team -- the Cubs.

This was a winter in which the insane number of dollars (all 1.65 billion of them) bestowed on a stunningly run-of-the-mill free-agent class gave lots of baseball men a near-coronary. But only one man -- Cubs GM Jim Hendry -- tried that literally. 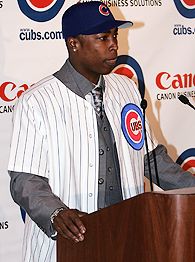 He needed an angioplasty after suffering chest pains at the winter meetings. But let history record that at least it didn't stop him from signing Ted Lilly.

"While I'm lying there, hooked up to the EKG, my phone rings," Hendry said. "I see the area code, so I know it's him. So what am I gonna do? I've gotta talk to him."

Hey, of course. Eight minutes later, Lilly was a Cub. And Hendry had a story to tell for the rest of his life -- even though he feels compelled to throw in this minor footnote for the sake of honesty: At the time, he thought he was a healthy man taking a quick test before getting back to business.

"I didn't find out until 20 minutes later that I had a problem, so it's not quite the heroic act it's been portrayed to be," Hendry laughed. "But on the nutball side of the story, what am I doing with the phone in my hand at a time like that, anyway?"

The answer: What else would he be doing? Jim Hendry spent the entire offseason with that phone surgically attached to his hand. Obviously.

As the Cubs head for spring training next week, they'll be hauling along 11 newly signed free agents, four of their own free agents whom they re-signed, a couple of new pitchers they traded for and one record that Bud Selig hopes will never be broken:

This team committed more dollars in one offseason ($317.55 million) than any franchise in the history of baseball -- or the history of dollars, for that matter.

OK, in truth, we shouldn't count the $10 million the Cubs dangled to sign manager Lou Piniella or the $10 million it took to lure Notre Dame's Jeff Samardzija away from football. So technically, they didn't quite spend $300 million on free agents.

But $297.55 mil is still a record. And it doesn't change the reason we've chosen the Cubs as the hottest story of the year. This isn't about the dollars. This is about the motivation and the powerful context behind that shopping spree.

The Cubs didn't spend that money just so Hendry could find out what it feels like to be Donald Trump. They spent it because they recognize the urgency to wipe out the tiresome talk about billy goats, Steve Bartman, 1908, 1945 and the same old Cubbies.

They spent it because it's time to win.

Well, there's nothing like 300 million bucks to fix what's broken. And while dollar signs alone don't fix everything, they sure beat the lack thereof.

So granted, the Cubs still have questions about health, top-of-the-lineup on-base percentage and how the pieces will fit in their outfield. But it's safe to say they're a lot better off with Piniella, Alfonso Soriano, Lilly, Cliff Floyd, Mark DeRosa and the rest of their 300 Million Club than they would look right now with none of the above.

"We owe it to our fans to get back in the game," said Hendry, now entering his fifth season as GM. "We had 3 million people go through the turnstiles last year in an awful season. And we owe them."

Hendry still recalls looking around, during the seventh inning of the final game of last season -- a season in which the Cubs lost more games (96) than every team in baseball except the Royals and Devil Rays. What he saw, amazingly, was 33,000 people still hanging out in the seats of Wrigley Field. That sight told him something.