The news earlier this week that Curt Schilling won't be retiring after all was hardly news at all, and not because Schilling intentions weren't true.

For the past two years, Schilling had made it abundantly clear that the 2007 season would be his last and that nothing -- no dollar amount, no sharpening of Cooperstown credentials -- could change his mind. 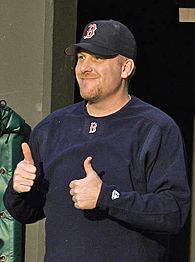 That changed Monday when Schilling announced his plans to pitch in 2008 -- in Boston or elsewhere. While the news was greeted with the usual amount of skepticism, Schilling was merely following an obvious trend in pro sports.

Not in the NFL, where coaches can barely keep a straight face as they signal their future plans. A statement from Bill Parcells wasn't hours old when speculation began about his returning to the New York Giants as either coach or GM. Understandably, no one took Parcells' Retirement III seriously. The same goes for Joe Gibbs, Dick Vermeil and any number of NFL coaches who just can't stay away.

Not in baseball, either, where pitchers -- successful ones, anyway -- are in the same category.

We're now 3½ years out from Roger Clemens' famous final scene in Miami, when Clemens acknowledged the cheers and tears from teammates, opponents and fans and rode off into the sunset -- only to execute a neat U-turn and return for three more seasons.

Just the other day, Clemens worked out, in an Astros uniform, at an Astros complex, pitching to his son, an Astros farmhand, and maintained that he was unsure whether he would continue pitching.

This same Hamlet-in-Houston act has been going on for the past three winters. Clemens is undecided. He isn't sure whether he has the motivation or the energy or the commitment. Eventually, of course, he returns. The 2007 season will be no different.

Clemens isn't alone in his hedging. His penchant for indecision apparently rubbed off on teammate Andy Pettitte, who pondered retirement, only to return to the New York Yankees. By the time Pettitte got around to negotiating his deal, he made sure the Yankees included a player option for 2008. Just in case, you understand.

David Wells threatened to retire last winter unless the Red Sox traded him to the West Coast. They didn't and he didn't -- retire, that is.

Wells spent most of last season proclaiming that he would absolutely, positively call it a career at the end of the year. Just weeks ago, of course, he signed a new one-year deal with the San Diego Padres. Turns out, Wells is neither the shy nor the retiring type.

He's not the only one. You could construct an entire pitching staff of 40-somethings, led by -- but not limited to -- Clemens, Wells, Schilling, Greg Maddux, Jamie Moyer, Tom Glavine and Randy Johnson. 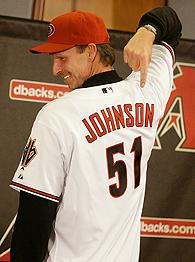 Johnson had a mediocre season (5.00 ERA) with the Yankees, but upon being traded back to Arizona, got a two-year extension worth $26 million. At the end of the 2008 season, the last year of his present deal, Johnson will turn 45.

Why do pitchers stick around? Though most would be loathe to admit it, money is a huge motivation. Of the seven pitchers listed above, only Wells and Moyer will fail to earn eight-figure salaries next year.

At a time when less-than-luminaries such as Gil Meche, Jeff Suppan and others will make $11 million annually in 2007, the demand for quality pitching has never been greater. Who can blame baseball's senior citizens for not resisting the seductive call?

Greater attention to conditioning and nutrition has made it possible for these aging bodies to perform at a high level for a longer period. It helps that, as unnatural an activity as pitching might be, it's nowhere near as punishing as football. Baseball doesn't have its own Tiki Barber, walking away at 31.

Above all else, athletes are competitors, and when advances in health and science make it possible for them to continue to perform at a high level for a longer period of time, the allure is great.

Retire for good? The new battle cry for players contemplating the end might be the same one used for years by disheartened fans: Wait until next year.

Or, maybe, the year after that.