NEW YORK -- On a quiet day, you can imagine the cheers and the baseball fans moving toward the Sullivan Place rotunda in Brooklyn, suits and ties, fedoras and pocket squares, fathers holding sons' hands, generations winding down to familiar seats. On a quiet day, you can imagine Duke Snider roaming the patio, and in your dreams, the bricks are lush grass and the concrete is powdery dirt and the drug dealers are children again, hopeful and innocent.

Those days are rare and fleeting, for Ebbets Field is a ghost now. Ebbets Field Apartments stand in its place. All that's left of the old park is a name, a marble plaque and a few fading memories. 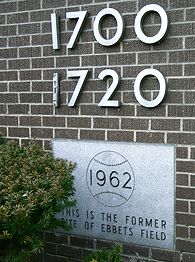 Most days, you hear sirens and the occasional pop of a handgun. You can smell the marijuana in the elevator. You can look out over the city and see the two forces squeezing the low-income families trying to make a stand on Flatbush Avenue: poverty on one side and encroaching gentrification on the other. If the random gunshot doesn't get them, the developers will.

Brenda Scott is standing on her 19th floor balcony, staring at the skyline. She's the head of the Ebbets Field tenants association, and now that she's retired from teaching second grade, she's fighting to keep the drugs and violence out and the low-income residents in. Last year, a bullet was fired through her front door. A warning? She believes so.

Sometimes, when she looks down where the infield used to be, she thinks about Jackie Robinson. Her grandmother, a woman from the segregated South, used to go to Ebbets Field. Those were bright days. They were proud of Robinson, felt like his actions had changed their lives forever. Now Scott looks in the eyes of the kids down on the patio and sees apathy.

"They just don't see his legacy as something to be proud of," she says. "To them, it doesn't matter anymore. They don't have an understanding of what he went through. And here it is, 60 years later, and there's still a struggle to keep a roof over your head."

"It should have stayed a ballpark," she says.

EBBETS FIELD WAS THE EPICENTER of a community. Kids played in the streets around the stadium. They went down to the roller rink across the way. And 16 years before Martin Luther King Jr. articulated his dream, one of the first steps of the modern civil rights movement was taken here.

"It was probably electric," Scott says. "It was a whole different world."

Times change, and on Feb. 20, 1960, the wrecking balls came to Ebbets Field. A ceremony was held at home plate. Former Dodgers showed up. The longtime public address announcer called the event. Charles Ebbets' original key was given to the Baseball Hall of Fame. Lucy Monroe, who'd sung the national anthem on many happier days, did so one final time. Roy Campanella received an urn of dirt. The band played "Auld Lang Syne," a slow dirge, the notes floating into the neighborhood, fading away.

About 200 fans gathered to watch their beloved park crumble, the two-ton wrecking ball painted like a baseball, smashing first into the visitors' dugout. Those who were there cannot forget. On the 47th anniversary, one fan wrote this on a message board: "I was there and saw it with my own two eyes. I have never felt so helpless in my life, before or since. That pain is still so real  and still hurts as much."

A few of them lingered. As the stadium came down, a conversation was captured by The Sporting News. Already, the neighborhood they knew was disappearing.

Soon, the apartments went up. They carried the name of the old park, but the spirit of the place died not long after the wrecking balls came. Murals featuring famous Dodger moments faded away and were never replaced. There have been problems for decades, including a disastrous co-op conversion attempt, rent strikes, lawsuits and reports of rampant roach infestations.

The old address, 55 Sullivan Place, once as famous as Wrigley Field's 1060 West Addison, doesn't exist. There's a clump of sad trees and a community center where the famous rotunda was located. The Mobilgas sign is now a dank stairway leading up to the patio. In the blocks around the complex, the crime rate is high.

The murder rate for the 71st Precinct, which had been going down after a staggering 36 killings in 1990, is higher than it was five years ago. Last year, 18 people were killed in the one square mile covered by the 71.

Crime isn't the only crisis. In the documentary "Super Size Me," Ebbets Field Apartments was the poster child for the poor urbanites being targeting by McDonald's. A place that once fostered blind hope now grows equally myopic desperation.

"Jackie Robinson would be rolling over in his grave if he saw the conditions at Ebbets Field. We're doing a disservice to his memory."
-- Letitia James, city council member

An official of the building's property management firm said efforts are under way to improve the patio and that complaints don't represent majority opinion.

"Letitia James is never happy," says Benjamin Baum of Fieldbridge Associates. "But whatever. Don't let the politicians' views skew you. They're just looking for votes."

Regardless of which side you agree with, the conditions at Ebbets Field Apartments leave those who remember the ballpark dreaming of a time long past. When Pee Wee Reese went back for a documentary, he remembered what once stood here and he wept.

"Jackie Robinson would be rolling over in his grave if he saw the conditions at Ebbets Field," James says. "We're doing a disservice to his memory."

BACK IN SCOTT'S APARTMENT, her young grandson toddles over.

"I'll get Elmo in a little while," she says.

What will Joshua's future hold? Can he live here? Will he be able to afford Brooklyn? Will he live to see adulthood? After he walks away, Scott points over to the door where the bullet came through. It's down near the bottom, just about stomach-high on little Joshua. He wasn't home when the shot was fired, thank God. The hole is covered in tape.

"I'm gonna let it stay as a constant reminder," she says. "Last summer, we had a lot of shootings on the patio. The thought of a stray bullet hitting a child is something you don't want to experience."

The 71st Precinct does a good job, Scott says, and has cleared out some of the drug dealers and run off the homeless living in the stairwells. But the police can't be everywhere. They can't solve all the problems. Because the government subsidizes their rent, people with mental disorders have been moving into Ebbets Field. One carried around a stick and wouldn't let people get on elevators. Four live on Scott's floor.

"If they're not on their medication," she says, "you know it."

As hard as life can be, that's not even the biggest threat. Rent is rising at Ebbets Field. Fair market value, landlords call it. It's hard to demonize property owners for trying to make as much money as possible; a market economy is at the heart of the national ethos.

Still, it's threatening to run Scott's son from the building. If a 45 percent proposed rent hike for him goes into effect -- he is trying to take over the lease of the apartment he's been subleasing -- then all of his take-home pay will go to rent, before he's bought an ounce of formula or a single diaper or anything to eat for himself. Scott is writing letters, trying to keep that from happening. She doesn't want her family to be split apart.

"I feel as if something is holding me here," she says. "I'm anchored here."

The rents will keep rising, though. It's happening all over New York.

"The neighborhood is changing," says Brenda Greene, an English professor at the adjacent Medgar Evers College and mother of influential hip-hop artist Talib Kweli. "It's becoming more and more gentrified. They're moving out. They've moved out to Queens. They've moved out of the city."

James says census numbers show a reverse diaspora: African-Americans moving back down South. Scott's family is from North Carolina; maybe they'll go there. The city cannot grow, but the population continues to do so, as does per capita income.

"We're stacked on top of each other," Scott says. "This place doesn't get bigger."

Despite the odds, she'll continue to take on the landlords on behalf of the residents, just as James does for the citizens in the district, even if it's an ultimately losing battle. The future is coming, and it's coming with fat pockets and wrecking balls. Just as there was no longer a place in Brooklyn for Ebbets Field, one day, there will no longer be a place for the Ebbets Field Apartments.

The skating rink, Empire Roller Skating, is the latest casualty. It's been here for almost 70 years and was recently sold. It will be turned into a storage facility. They'll turn its walls to dust, too, just as they did down the street almost 50 years ago.

Each day, the memory of Jackie Robinson slips a little further away. There are plans to erect a statue of him in the patio, and put in some bleachers, once again reinforcing the site's history. If nothing else, Scott could look down and take inspiration. Sixty years later, she's still fighting his fight.

"Just to keep a roof over your head," she says, "is a civil rights issue."